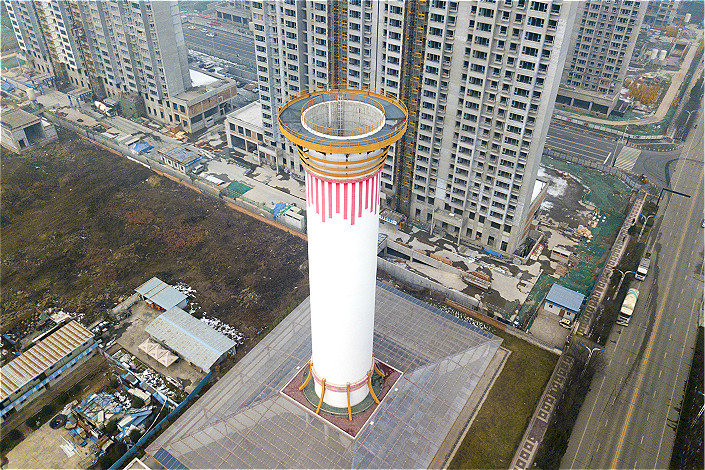 This 60-meter-high (197 feet) smog-sucking chimney in the northern city of Xi'an cost $2 million to build and around $30,000 in annual running costs. Photo: VCG

Earlier this week, as Beijing was enveloped by one of its worst bouts of smog in recent months, China’s internet was again abuzz with questions on what policymakers were doing to ease the problem.

Meanwhile, delegates attending the country’s top annual political meetings — of the top legislature and the top political advisory body — were hammering out new proposals and ideas on how China should fine-tune its strategy to curb pollution.

One of the recurring themes at the meetings and in recent years is how innovation can be used as a weapon in China’s “war” on air pollution. Both the central authorities and local governments are looking into how scientists and clean tech startups can be turned into foot soldiers in this drawn-out campaign.

A poster-child for these innovative attempts is a 60-meter-high (197 feet) smog-sucking chimney, built in the northern Chinese city of Xi’an. Although scientists conducted their first set of tests to check its efficiency at cleaning up polluted air in January, the experiment only hit national and international headlines last week. The $2 million facility was built by the Chinese Academy of Sciences and has been promoted as an affordable model for “mass-scale air filtration.” Although the results from the experiment haven’t been published in any scientific journal, and therefore haven’t undergone peer review, preliminary reports determined the chimney emitted between 5 million cubic meters (176.5 million cubic feet) and 8 million cubic meters of filtered air every day. Monitoring stations located close to the chimney, across an area of 10 square kilometers (3.8 square miles), recorded 19% less particulate matter in the air compared to other parts of the city.

The chimney sits atop a large circular structure. Glass panels near the roof of the structure are heated through solar radiation, and this warms up the air and causes it to rise toward the base of the tower, where it passes through several industrial filters, before being released through the top of the chimney.

“We have submitted a proposal for another 300-meter tower in Xi’an,” the project's lead scientist, Cao Junji, said. “We are also negotiating with cities in Guangzhou, Hebei and Henan (to build similar facilities).”

Government-backed research projects have been told to accelerate their pace after the country’s top environmental watchdog last year created a national research and development (R&D) taskforce to implement the more than two dozen cutting-edge research programs.

But, there are still lingering doubts about the cost efficiency of projects like the massive smog-filtering chimney. In an interview with the scientific journal Nature, Cao suggests that arrays of around half a dozen towers might be necessary to tackle the smog in urban centers, which could be prohibitively expensive. Cao estimated the running cost for the pilot program was about $30,000 per year.

China wants to cap its carbon dioxide emissions by around 2030. The country will raise spending to curb pollution by 19% to 40.5 billion yuan ($6.4 billion) this year, according to a work report presented by Chinese Premier Li Keqiang to the National People’s Congress on March 5. A significant portion of this will go into research and development of new technologies, experts said.

But skeptics have raised questions about the technical soundness of grand schemes such as the smog-filtering towers.

Neil Donahue, a professor of chemical engineering, chemistry, and engineering and public policy at Carnegie Mellon University in the U.S., told Nature that it wasn’t clear whether the environmental impact of building these structures would outweigh their benefits. “I would like to see an assessment of the power and resource use for the filtration,” he said. Turning the same amount of power into clean electricity, or not emitting the pollution in the first place, might achieve the same goal of reducing pollution, he added.

Donald Wuebbles, an atmospheric scientist at the University of Illinois at Urbana-Champaign, is concerned that the chimney would filter only particulate matter but not sulfur dioxide gas and nitrogen oxides, which are also dangerous to human health. “So while the sky may look cleaner, the air quality can still be really awful,” he said.

The search for innovative methods to cut pollution comes as policymakers have exhausted other, simpler options such as helping rural homes to switch from coal to gas.

Delays and poor planning linked to a government program that pushed millions of households in northern China to switch from coal to natural gas, left thousands without heating last winter.