No Breather for Clean Air Drive

By Huang Yuhan and Li Rongde 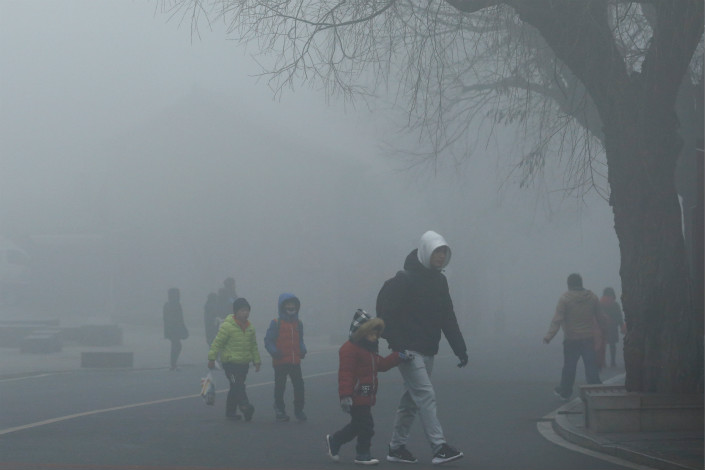 Pedestrians endure the heavy air pollution in Beijing on Tuesday. This week’s poor air quality aside, the average level of cancer causing PM2.5 particulates in the city fell 35% from 2013 to 2017. Photo: VCG

China’s environmental watchdog has vowed to maintain the momentum of its aggressive, four-year clean-air campaign after preliminary assessments showed past efforts contributed to at least 70% of the drop in air pollutants in Beijing.

The Ministry of Environmental Protection is drawing up a roadmap to wage a new war on toxic smog over the next three years, according to Liu Bingjiang, director of the ministry’s Department of Air Environment Management.

“There will be one battle after another to ensure greater achievements over the next three years,” Liu told reporters at a news conference in Beijing on Tuesday.

The average concentration of PM2.5 particulates in Beijing and its neighbors Tianjin and Hebei province — three regions notorious for toxic smog — fell by nearly two-fifths from levels in 2013.

Beijing made the biggest improvement, recording 226 blue-sky days last year, nearly a month more than in the previous year. The anti-pollution drive over the past five years contributed to 70% of the drop in PM2.5 particulates in the Chinese capital, according to a mid-term assessment of the clean air campaign.

Researchers also attributed 80% of the reduction in PM2.5 particles in the air in Tianjin, Hebei and the Yangtze River delta region that includes Shanghai, to a crackdown on polluters over the past five years.

Favorable weather conditions, or heavy winds, also helped improve air quality, said He Kebin, a professor of environmental studies at Tsinghua University, who was a member of the 50-person panel that carried out the assessment.

If the meteorological conditions last year had remained the same as in 2016, PM2.5 levels could only go down from 73 to about 63 micrograms per cubic meter, according to the report.

But, tackling air pollution in China remains a severe challenge as the country needs to do more to meet the national standard of an annual average of 35 micrograms of PM2.5 per cubic meter, according to Liu. The air is up to the standard when daily average of PM2.5 throughout the year does not exceed 75 micrograms in a cubic meter of air.

Less than 30% of the 338 key Chinese cities on the environmental protection ministry’s watch list for air pollution had met that standard by the end of 2017, according to the ministry.

There is “no safe threshold” of PM2.5, according to the World Health Organization. But when the 24-hour mean level of the pollutant exceeds 25 micrograms per cubic meter of air, it increases the risk of developing lung cancer and other health problems.