By Ding Jie and Li Rongde 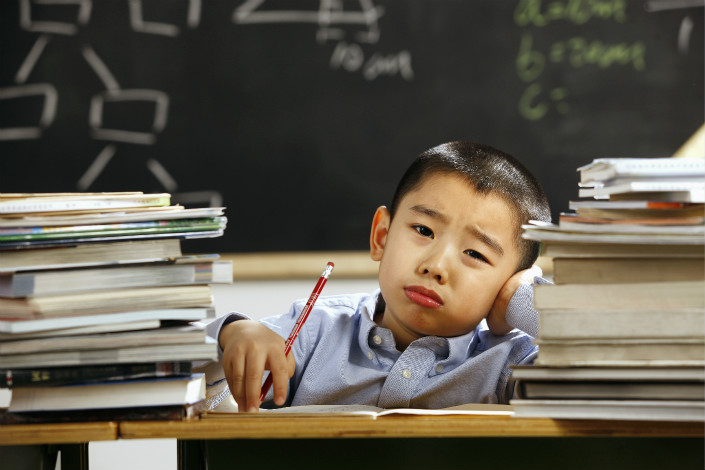 A student stresses over too much homework. China’s education authorities have tried to crack down on expensive after-school private tutoring centers, but have failed to have an impact. The issue came back under the spotlight after Premier Li Keqiang promised to strengthen oversight of this unregulated business in his government work report to the country’s top legislature on March 5. Photo: VCG

Children as young as 9 or 10 years, pouring out of private tutoring classes after dusk, has become a common sight in China.

Education authorities have tried to clamp down on these private facilities for years, but have so far failed to rein them in. Although many children, and even some parents, say these after-school classes add to their stress, only a few dare to opt out, fearing they’ll fall behind in the race for a seat at an elite school or university.

Now the issue is back in the spotlight after Premier Li Keqiang promised to strengthen oversight of this unregulated education sector and ease the financial and academic burden on students and their parents, according to his government work report to the country’s top legislature on March 5.

The rare mention of this perennial problem — at one of the top political meetings in the country — comes amid rising public concern over a widening gap in terms of access to good public schools between children whose families are willing to pay huge amounts to private tutors and those that can’t afford it. But, policymakers have yet to come up with any concrete proposals on how to tackle the problem.

A growing number of teachers, employed full-time by public schools, are also moonlighting as part-time instructors at private tutoring institutions for extra money, although this is illegal under Chinese law. These teachers have neglected their duties in the classroom at school, putting poor students at an even greater disadvantage, according to critics.

Li Xiaoen, a mother of an 11-year old from Beijing’s Haidian district, said she was worried that the private tutoring schools were giving an unfair edge to students from rich families, as working-class families like hers can’t afford such services or expensive tutors.

Regulatory failure to prevent public school teachers from working as private tutors is unfair to students like her son because the teachers might simply prioritize their tutoring role over their full-time job, she said.

At one facility operated by private tutoring service provider Jinbo Education in Haidian, one of Beijing’s popular school districts, students pay 500 yuan ($79.10) to 2,500 yuan per hour for a one-on-one session with a teacher on subjects such as math and English, depending on the popularity of a teacher, according to an administrator at the center. Students are required to purchase at least 50 class hours up front, meaning parents have to shell out somewhere between 25,000 yuan to 125,000 yuan before the sessions can begin.

“But, our quality is guaranteed. We offer a 20% refund if a student’s performance doesn’t improve, say, if they haven’t scored 15 points higher in monthly tests compared with the previous month,” the administrator said.

Costs at a school owned by Boshi Education, another private institution in the same area, are a little less, but students are also required to purchase a certain number of hours, each costing between 340 yuan to 1,000 yuan for a personal tutor.

In comparison, the average monthly salary of a worker in the Chinese capital was just over 9,200 yuan ($1,453) in 2016, according to the Beijing municipal statistics bureau.

Despite these crippling rates, more than two-thirds of parents recently surveyed by 21st Century Education Research Institute in Beijing said they chose to enroll their children in after-school classes because of intense competition for seat at an elite school or college or because of concerns about poor teaching quality at public schools.

Many students, who finish school at about 3 p.m., are seen flocking into private tutoring institutions hidden in high-rise buildings or residential apartments nearby. The mad dash from school to tutoring classes has become a part of the daily routine for many teenagers in China, so much so that it’s been referred to as the “3:30 p.m. phenomenon.” Students are sent to these facilities because their parents want them to gain an edge in class or are too busy to help children with their homework after school.

On Feb. 28, several students with thick glasses emerged around 6 p.m. from Fanya Plaza in Haidian, where a branch of Jinbo Education is located. It was only the third day of the new school term after the Lunar New Year holiday, but many of the students already looked tired.

A 10th-grader attending a class at the center told Caixin that he had only rested for a day on the eve of the Lunar New Year and had spent his entire winter break doing homework and attending tutoring classes.

“I had to rush to finish all my chemistry homework, assigned for the month-long winter break, in just three days in order to make time for tutoring classes,” said the student who asked not to be named.

Demand for after-school classes is particularly high among students at elite primary and middle schools in China, who face fierce competition when trying to get into a popular high school or a prestigious university.

In Xinke Xiangyuan neighborhood in Haidian, which is home to several top primary and middle schools, advertisements for private tutoring services can be seen everywhere and parents even jokingly refer the area as “the tutoring street.”

Many private institutions try to woo students by promoting the fact that teachers from popular public schools work part time in their institutions.

For example, a center affiliated to Jinbo Education claimed in their promotional flyers that they recruited teachers from several elite public schools, including a middle school affiliated with prestigious Renmin University.

Caixin provided names of several tutors to an administrator at the public school affiliated to Renmin University, and he confirmed that these teachers were employed by the school full-time, and that the school has launched an investigation to clamp down on this illicit practice. However, the administrator didn’t respond a question from Caixin on the outcome of the probe.

Public school teachers in China aren’t allowed to work part-time elsewhere and could be demoted or face other penalties according to government regulations. But few have been punished due to a lack of enforcement of such rules, according to several industry analysts.

Teachers who juggle both jobs tend to sacrifice their full-time job at the expense of students in public schools, according to Zhao Yaming, principal of Jinzhou Middle School in China’s northeastern Liaoning province.

But others say such a clampdown would only serve to push such facilities underground. Teachers will always be lured into working part-time because the pay at public schools is comparatively low, said Xiong Mingchuan, an associate professor at Sichuan University of Arts and Science.

Public school teachers should be paid as much as other public servants so that they don’t need to juggle two jobs, which is detrimental to the public school system, said Yang Dongping, director of the 21st Century Education Research Institute.

“Once they are treated as public servants, teachers must choose to work at public schools or to leave for private institutions for more money,” he said. “They should be fired and have their teacher’s license revoked if they are found to be moonlighting at private facilities.”