Cracking the Code to Get Women into Programming 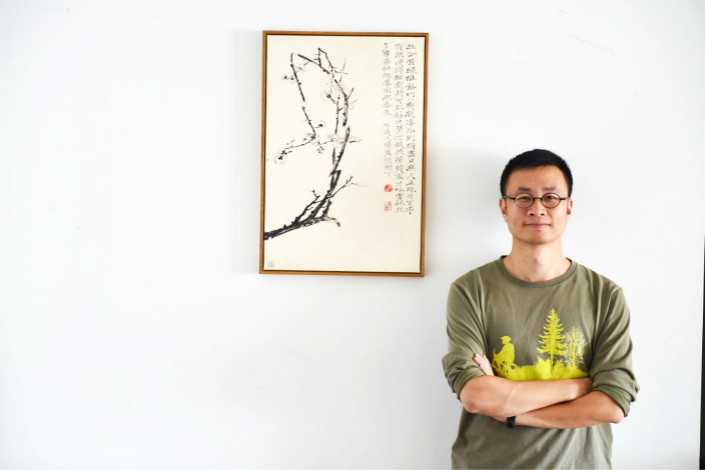 Chen Bin, founder of China’s first non-profit program encouraging girls and women to learn programming skills. Over 150,000 participants above the age of 14 have enrolled for free online courses on the Teach Girls Coding site since it was launched in July. Photo: Chen Bin

It was the overwhelming response to one of his social media posts that convinced software engineer Chen Bin that teenage girls and women across China were hungry to learn programming skills.

Chen, 37, who has worked for global tech giants including Microsoft Corp. and Cisco Systems Inc., had noticed the lack of women in engineering, specially IT-related jobs, but hadn’t given the issue much thought till his social media post in May last year, caused a stir.

“It was just a tentative survey posted on Weibo (a Twitter-like service), asking whether there are girls above the age of 14 or women who are interested in learning to code and would support such courses. The response was beyond my imagination,” said Chen, who launched a non-profit program called Teach Girls Coding to fill this void within weeks of his post.

In less than 9 months, his website has attracted over 150,000 female participants who have enrolled in nearly 40 free courses covering major programming languages such as HTML5, JavaScript, Python and CSS. Although the internet is flush with resources that help people learn coding skills, Chen thinks that it’s easy for beginners to feel overwhelmed and give up quickly. In his approach, Chen doesn’t require students to have any prior programming knowledge and participants learn by interacting with a chat bot, which plays the role of a tutor and can help create a customized learning experience.

“The courses in the project aren’t difficult even for beginners, because we want to build confidence and push them to soldier on by believing that coding will be a promising and tangible career,” Chen said.

Chen’s non-profit also offers career guidance and different learning plans for those who want to specialize in a certain area.

Chen said he has invested about 1 million yuan ($158,000) to develop new courses and rent computer servers from his own pocket so far. Although the project takes up a lot of his time, he also runs a for-profit company called Coding Garden, which focuses on teaching children aged 7 to 12 to code. He also sells tea online to supplement his income.

Chen’s efforts have received both praise and criticism online. Some thanked him, saying learning to code has helped them find better-paying jobs. But, some criticized him for promoting the service as one dedicated to women, saying this is another form of gender discrimination. Some suspected his intentions, saying he was using the non-profit project to boost his own profile.

“I never argue with people because it’s useless,” said Chen. “My deeds and the good outcomes are my best defenders. In the long run, more people will see the fruits of our project.”

Chen’s work has been recognized by UN Women and his next step is to offer free courses for girls ages 7 to 14.

Over 40% of the workforce in science, technology, engineering and mathematics (STEM) related fields in China are women, compared to just 24% in the U.S. and 24% in the U.K. But according to U.S. non-profit Centre for Talent Innovation, all but 30% of Chinese women in STEM jobs abandon their field after their first year at work. That’s because 68% of female STEM employees in China feel that they are evaluated differently from their male peers and have experienced discrimination, according to a recent survey by the advocacy group. Over 57% think that women in the sector would definitely hit a glass ceiling.

Chen has expanded his project to tackle the larger issue of workplace discrimination faced by women in the tech sector and is working on an online textbook on gender equality, which can help guide companies.

“Encouraging more women to enter STEM fields isn’t a China-specific move. Projects such as ‘ladies learning to code’ in Canada, ‘girls who code’ in America and ‘girls coding camp’ in Singapore are all striving toward the same goal. I just want create a similar movement in China,” Chen said.

Caixin: What inspired you to start a project to teach girls coding after setting up a company teaching children coding? Had you planned it for quite a long time?

Chen Bin: It was always rare to have female colleagues when I worked for Microsoft and Cisco. However, they performed as well as their male counterparts. Even in my own company, my female employees are excellent and professional and the highest salary-earner is a woman. This is also the case in terms of my students in coding garden. Though only one fourth of them are girls, they have talent and the ability to learn quickly. However, girls’ talent and potential for programming are often overshadowed by stereotypes held by parents and teachers.

This is the main reason that prompted me to first think about offering subsided offline courses to encourage more teenage girls and women to learn coding and to help then regain their confidence.

However, the sheer volume of supportive feedback for my Weibo post surprised me and pushed me to reconsider the project. Finally, I decided to change it into a non-profit program and offer free online courses. I had not planned to teach online, so our team spent about 20 days to develop a new teaching system.

What has made your courses so popular in such a short time?

Our approach is different to the traditional way of prerecording the courses and posting them online. We were the first in China to adopt an AI-based teaching method.

It is an interactive way to support self-studying. When you enter the webpage for one of the courses, the interface looks like that of WeChat, a popular Chinese chat app. Students can learn by talking to a “teacher,” which is an intelligent chat bot. If students answer the questions posted by the “teacher” correctly, they are rewarded. We also have a forum for learners to ask and answer questions. I check this forum every day to answer questions that remain. Apart from online courses, we also conduct workshops in Beijing

What will be the major focus for Teach Girls Coding in 2018?

This year’s focus for the project is to help women who have learned coding get employed or find internships.

We are working together with one of the biggest intern-recruiting websites in China, called “Shixiseng.” We shall start sharing their recruitment ads on our website and app before the end of this month.

I have also contacted the head of recruitment at Alibaba Group Holdings and Cisco, and they have agreed to interview those who achieve a certain level of proficiency by following courses offered by “teach girls coding” and conduct lectures offering interview tips to them.

In China, students have to choose whether to specialize in arts or sciences in high school. Half of those who choose science subjects are girls. But, why are there fewer women in high-paid STEM jobs?

The direct reason is many girls studying science at high school do not choose majors such as programming or engineering. Only five out of 50 students in my class were girls when I was in college. Therefore, the low proportion of women in science and technology courses in college will result in the low proportion in the workplace.

It is true that about 50% of girls choose to learn science but that does not mean they or their parents do not bear stereotypes about women learning STEM. People usually think that boys exceed girls in math and logic, which are all important elements of studying STEM subjects. Therefore, some parents may prefer their daughters to choose majors requiring those elements less.

However, the worst thing is girls or women themselves hold on to these stereotypes and, therefore, lack self-confidence. They do not dare to enroll in STEM courses in college, or women in these majors do not dare to challenge themselves to become programmers.

What is the most important quality to become a good programmer?

Based on my own experience, I would say it’s the ability and motivation to self-study.

I started to learn coding at the age of 14. I fell in love with coding after my parents bought our first computer in 1996. However, without teachers or any books about coding at hand, I resorted to self-learning. I translated the instruction manual by looking up the dictionary word-by-word. In this way, I finished learning the programming language BASIC during my summer holiday that year.

I found online resources including notes and online courses offered by prestigious universities including MIT and Stanford at the age of 17 and bought the textbooks abroad. Then I wrote my first operating system as a sophomore, called Lingix, and won several awards at programming competitions when I was an undergraduate at Central China Normal University.

The best resources can all be found online.

The ability to self-study is especially important in an era that requires lifelong learning. After all, no one can be your lifelong teacher except yourself.

What suggestions do you have for women attempting to break into a male-dominated field like software engineering?

You need to struggle against the traditional notion that a women’s job is to take care of children and do chores at home.

I am not saying that women with a career should not have babies. Before marriage, they should talk to their husband and come to a consensus that both have responsibilities on babysitting and housework. Otherwise, in most cases in China, women have to shoulder most of household responsibilities, while having to shoulder the same pressure as men at workplace.

If couples in China can share of household responsibilities in a more fair manner, women would be free to devote more time to work and can prove to their bosses that they can show the same level of dedication as their male counterparts.