Women ‘Lean In’ Together in China 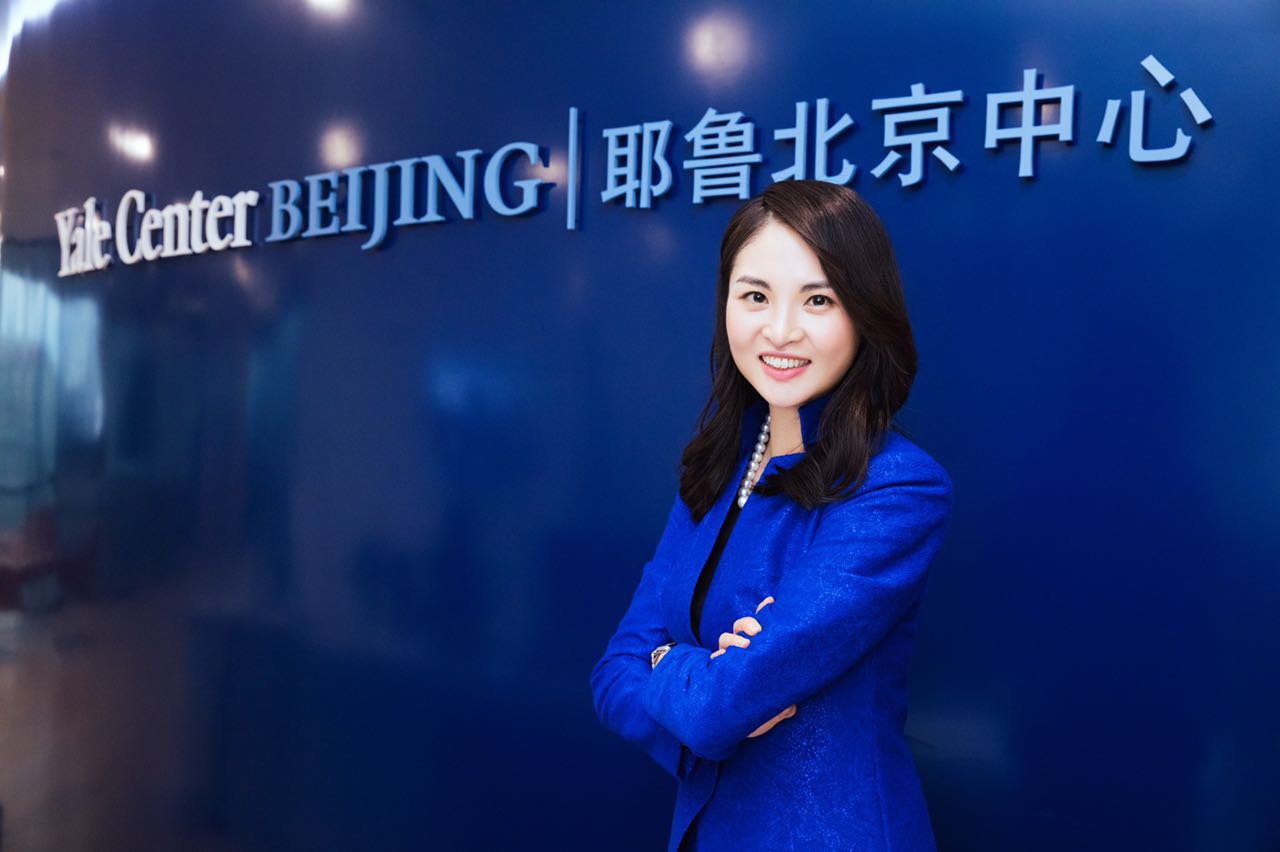 When Carol Li Rafferty opened Yale Center Beijing, she was 38 weeks pregnant. In addition to being the founding director of the center, which facilitates dialogue between businesses, governments and universities, Li Rafferty is also the co-founder of Lean In China, which engages more than 100,000 women across China in professional support networks.

Lean In China has grown exponentially since 2013, when Li Rafferty first read the book “Lean In” by Facebook Chief Operating Officer Sheryl Sandberg and decided to start a peer support group (known in Lean In circles as a “circle”) with 10 friends, over a dinner of dumplings and pizza.

They decided to start living the ideas in the book, finding ways that they could help each other “lean in” in different ways. They sent out a survey to their networks called “What Women Want,” asking them what they thought they needed to succeed, and soon these circles were formed all over China. The circles are spaces for relief and support, where like-minded women can share their concerns in a confidential setting, many of which are based in Chinese universities.

Raised in Hong Kong, Li Rafferty graduated from Yale and Stanford, and worked in finance, law, and government before becoming the inaugural head of Yale Center Beijing. She is a fellow at the Aspen Institute think tank, and the World Economic Forum has named her a Young Global Leader.

Caixin interviewed Li Rafferty to learn more about the prospects for gender equality in the workplace in China, and how Lean In is changing the picture.

Why do you think Lean In has had success in China?

Li Rafferty: The zeitgeist is right. Right now in China, there are more and more young professional women in large cities all over the country who need sisterhood and sounding boards. When we launched, we invited people to come and experience the support group format, dividing them in groups of nine to 10 people.

This form of support is particularly powerful in China, not least because of the consequences of the one-child policy: Many people haven’t had close peers to share their personal worries and challenges with, and we provide that. China is also so competitive that many feel that it’s difficult to open up about their life and problems to their immediate colleagues. The circles allow women to meet others who have similar problems but are not in their immediate professional life sphere. In fact, we notice that the more they’re strangers to one another, the more they’re able to share.

Getting outside their own work environment is also a way to break out of our “siloed society”: Doctors hang out with doctors, and lawyers hang out with lawyers. This means that we miss out on a lot of the insights and solutions that others may already have found — and of course, on vital support networks, that can help the career along and break that glass ceiling. Lean In is responding to the needs that young women in China have right now.

Are there any other China-specific challenges that women in the workplace face here?

One thing that’s very pronounced is the pressure to marry, I would say. It really comes from parents and older generations — people have historically been married very young. This especially hits the “shengnü” — young women who pursue high-powered careers or who take Ph.D.s — both because high-powered careers and Ph.D.s are difficult to pursue in married life, and because these women may be regarded as “too successful” to be marriageable.

Many of the women in our circles are also finding themselves in an unfamiliar situation because of China’s fast economic growth and demographic shifts — often they are women from second- or third-tier cities working in first-tier cities. They’re incredibly ambitious, but it’s also quite tough when your family is elsewhere and you don’t have a natural community of people you can lean on — to lean in!

Can you tell us about what you got out of participating in these circles, on a personal level?

Throughout my life, I’ve had the fortune of getting to know a lot of amazing role models. There’s the CEO of Ctrip, Jane Sun, who is an Aspen Institute classmate. There’s the journalist and entrepreneur Yang Lan. And there’s Zhang Xin, who runs Soho China, the real estate company, and who actually founded her own circle called “The Big Girls Group” with ambassadors, CEOs and CFOs (chief financial officers) of some powerful companies.

There’s a certain script that we have just because we’re raised as women, and this group is incredibly good because it’s really valuable to have each other and to encourage each other to, you know, raise that hand and put ourselves out there. The meetings give us this feeling of “I can do it too!” And this is also something that we want to pass on to younger women, as mentors, because success doesn’t mean that the difficulties go away.

Have you seen that Elle article where they photoshopped all the men out of important meetings? You know, you’d have (IMF Managing Director) Christine Lagarde here, (U.S. Fed Chair) Janet Yellen there, but … so lonely! So lonely! What the circles can do is be a forum for advice and mentorship: How do you present yourself well? How do you move up? You can see your circle as your personal board of advisers.

Apart from the circles, what else do we need to do to improve women’s chances in the workplace?

For all the good the circles do, it isn’t enough that women help other women: Men have to help women too, if family and career are to co-exist. Obviously, I wouldn’t have been able to do all this without having the support that I have from my father, my brothers, my male colleagues and my husband. The Yale leadership, many of whom were men, had to be supportive of me being 38 weeks pregnant when the center opened!

In the U.S., you can barely talk about pregnancy in that context, but I actually think it’s incredibly helpful to have that conversation. They had to understand that there are times when, you know, I have to give birth! And in the same way, when I had that first Lean In pizza meeting, my husband was watching our child. Not everyone has this. I’ve been lucky for sure, but there are also many conversations that one can have in order to make a parenting relationship work. My husband has been indispensable for me to have my career, but I’ve been just as indispensable for his ability to have a career.

Having a child is literally a joint venture. If there are children in the game, and I have two, then you have to think of your lover as if they’re the partner in your investment firm. If they’re not into cooperating, it’s not going to work. It’s not a one-off conversation. There are new situations all the time. How do we deal with it when I have to be in Davos and he has to be in (Washington,) D.C.? The house, the kids, the dinner, the garden, the whole “second shift” — is work too, and if you don’t do due diligence with family affairs as you do with business affairs, there are bound to be problems. My husband and I had a very long and serious conversation before we even started holding hands! You have to ask yourselves, does it make sense to have a joint venture? Are you magnifying each other so much that you can make everything work? Without support, you can’t lean in.

How about on the country level? Do you see gender equality going in the right direction?

Starting a long time back, China’s Communist history has played a role, both ideologically, with Mao’s famous slogan that “Women hold up half the sky,” and practically, in that women have long been expected to work outside the home, and that the school and kindergarten systems are therefore designed to fit that reality.

Also, one positive impact that the one-child policy has had is the 4-1 grandparent-to-grandchild ratio. That extra child care is often very helpful for strained working parents. All this doesn’t mean there are no problems left, of course. In the World Economic Forum’s “Global Gender Gap Report,” China ranks higher than both Japan and South Korea, but it could still do a lot better.

It’s because, as I mentioned, the pressure to marry early remains high, because of Confucian ideas of female gender roles and of course the economic pressures of the one-child policy. In that sense, it’ll be interesting to see whether the two-child policy ends up easing the pressure or creating more potential delays for women early in their careers.

What would you say individual companies can do to help women?

There are many things! For example, employers are increasingly recognizing that pregnancy is not a disease, but more of a scheduling conflict! I was heavily pregnant when we picked the space for the Yale Center, when it was undergoing renovations, when we were hiring the new team. Of course, not everyone wants to do that, but the point is that if you have periodic absences from the labor market, that shouldn’t necessarily be seen as a setback. There’s value in that perspective.

The e-commerce giant JD.com was created by someone (Liu Qiangdong) from a farming family who was tired of all the middlemen in the food-growing business, and the Alibaba empire was created by an English teacher (Jack Ma). What kind of amazing things can a professional mother do, then? Universities, for example, are increasingly admitting students based on broader criteria than just grades, and in the same way, companies might want to recognize that mothering (and fathering) is actually a legitimate kind of management experience!