How Beijing Used to Be 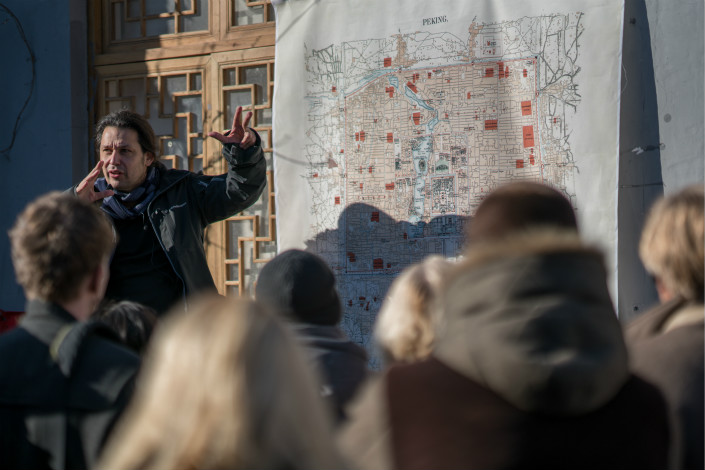 History slaps you in the face when you enter the “hutong” alleys just south of Tiananmen Square. The transformation of Beijing’s ancient residential communities over the past decades is particularly visible in the Dashilar area, where shiny, Starbucks-lined shopping streets sit side by side with the windy, bustling living quarters of old Beijing. One particular street stands out, but not for its hip, off-brand coffeehouses, but because it is home to Lars Ulrik Thom’s Public History Space, devoted to preserving the memory of how Beijing used to be.

Beijing’s tourist signs are sometimes stingy with historically interesting details. Not so with this place. The exhibition space has just two rooms, but they are brimming with stories. The building’s facade is nondescript. You enter through a pair of carved wooden doors, still without a sign. On the wall, there is a photograph of an old man happily holding up a handmade brush, proudly showing off his hutong workshop. Another photo shows an elderly couple in their combined bedroom-living room. A sign explains that they first met at a state-owned lemon soda factory, and indeed, the pair made sure to sneak some bottles into the picture. “They’re all from this neighborhood,” Thom says, grinning as he returns to the interview with cookies, candy bars and black coffee.

Thom was an adventurous mid-’90s high school graduate who decided it was a good idea to go backpacking in China with a friend. He left his hometown in Denmark, hopped on the Trans-Siberian Railway, and found himself in a 24-person dorm room in a lively backpacker area in south Beijing. Unlike most backpackers, he liked to stay in the same area for a while so he could really get to know a place.

After studying and working as a tour guide, Thom started collecting old pictures of Beijing with his friend (and now business partner) and then selling them to bookstores, hostels and other places. This photo business expanded into calendars and then reproductions of old maps. They started getting invited to give talks. The talks turned into lectures, then walking tours, and soon a concept emerged: public history, told on the ground, and researched in unrelenting detail. Their customers are companies, schools, tourists and universities. But importantly, locals are an essential target. Everything in the exhibition space is bilingual in English and Chinese. It’s Chinese history, after all.

Caixin: What was the thing that made the biggest impression on you when you first came to China?

Thom: There were so many! But one of the things I noticed was how many old buildings in Beijing would be marked with the character “chai” (拆, which means “marked for demolition”), and then bulldozed out of existence within a week. Boom! That really left an impression. You know when you walk by a tree, or a building, and it triggers a memory? That wouldn’t happen if the tree or building wasn’t there. Tearing things down causes a mental reset. I couldn’t help thinking about what it meant for local people and the way they think about where they live. Of course, it’s not always just a bad thing that the old is going away. In many ways, people want it. … And the challenge is how we can move on without completely resetting the past.

And is your exhibition project a way to do that?

Yes, our project is about letting people relate to the place they’re in. That doesn’t mean that nothing should change, but I think it’s good if people have some form of reference to the past. This includes understanding the reasons behind what happened, and why the changes were made. That’s why it’s scary when you see things like the hyper-touristy shopping street Qianmen Dajie, which runs perpendicular to the street we’re on — it’s recently been widened and refurbished, and it’s being branded as “Old Beijing,” which is not helping us understand the past at all. To the contrary, it’s replacing real history with imagined history, and it’s creating a kind of blind nostalgia that severs us from our past. One of the reasons we’re here is to help give people another perspective on what old Beijing was actually like, to add some layering to the story. There’s so much richness in Chinese history, so many stories that are untold. When we look at old pictures, it’s so easy to misinterpret the background and get things wrong. I sometimes think I know, but then I do some research and discover that I’m totally wrong. It’s amazing.

All of your background research for the space is original and source-specific. Why is this important?

The way the media works nowadays, it’s so easy to go for the easy solution. We have to be better than that. Textbooks often cut the link to the archival material and start to generalize. We use the archives because we want to know about the things people thought when they did what they did. Because they did think things. They weren’t weird. There were logical reasons.

So the old people complement the archival material?

Yes! In the beginning, we mostly focused on interviews with people who could remember specifics, like what the old train station looked like, or what the guy who painted the Mao portrait was like. But then we moved to the hutong and started talking to our neighbors. One of them was Mr. Shi, and we made an entire history walk based on his life story. Mr. Shi came to Beijing at 14 because his father had died and his mother had married into a new family. The family sent him to Beijing because they were afraid he’d be recruited for the civil war if he stayed in the countryside. He became an apprentice in the Dashilar area, which back then functioned like New York’s Ellis Island for the newcomers to the city. There were guilds that regulated how many apprentices each shop could take. You couldn’t just take 10 in because it would distort the competition. Apprentices would usually work for three years with no pay, only some food and shelter. It was a way to toughen up. Mr. Shi later became a policeman.

What’s that big map at the end of the room? It takes up the whole wall!

It shows the ancient waterways of Beijing. It was made by my business partner’s wife. I said that when I do research, I always have to revise what I thought I already knew. The one thing I forget over and over again is the water. The grain ships would come up via the Great Canal — here. The channel came through Tianjin, all the way from Hangzhou — since the Yuan Dynasty (1279–1368)! See, the map is intended for children, and we’ve added in a little picture that shows interesting things in Beijing that have to do with water. Look at the elephants right here outside the Forbidden City. Did you know they used to take the emperor’s elephants out for a bath in the moat every year? The whole city would come and watch! And look here, where the zoo is: It was flooded in 1963, so we have a panda and two monkeys huddling on a building to avoid the high water.

There are so many maps here. Can you give another example of how they can help us understand the past?

Look how important Tongzhou was! Now it’s just another part of the city, but on this map you can see that the very first cobbled street went between there and Beijing before the cities blended together. The map is an old German military plan, … and because the map was used for practical purposes, it also shows what is outside the gates of the walled city. It shows that entire little cities had been built outside each gate — that’s where the business was, going in and out of the city. The largest district is to the east, outside what is today Chaoyangmen — and why is that the largest one? Because it’s on the way to Tongzhou! And if you wonder why so many places in Beijing are called something-something-“men,” then look closer: “men” means gate, and they are all on the perimeter of the old city wall! And this is except for Fuxingmen and Jianguomen (which were not named until 1949), of course. Those were made by the Japanese during World War II to make it easier to get into the city. And look at this one, too: Many visitors to Beijing get told that the reason the innermost ring road is called the Second Ring Road is that the wall of the Forbidden City is the first. But in fact, the “first ring road” was the tramway that used to circle the city between what is now the wall of the Forbidden City and the Second Ring Road. The old people we talk to always correct us on this.