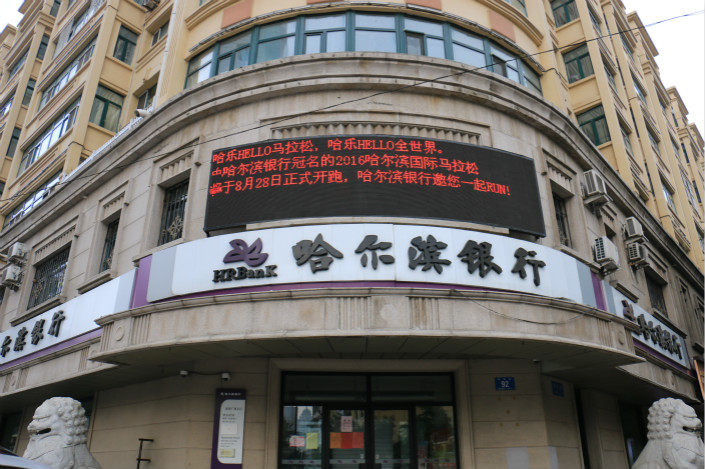 Tomorrow Holdings Group owns about 25.75% of the shares of Harbin Bank through five related companies, exceeding the Chinese banking regulator’s shareholding limit of 20% by one shareholder. Photo: VCG

Conglomerate Tomorrow Holdings Group holds a controlling stake of a bank that recently abandoned its mainland listing after regulators raised questions about its shareholders, Caixin has learned.

Tomorrow Holdings’ control of Harbin Bank Co. through five related companies illustrates how the opaque shareholding structures that some companies employ can hide who controls a company, leaving potential investors in the dark.

Financial regulators have been tightening control over the ownership of banks to stop shareholders from building up hidden stakes and using them to influence operations.

Tomorrow Holdings, a financial conglomerate, owns about 25.75% of the shares of Hong Kong-listed Harbin Bank through the related companies, Caixin has learned. The figure exceeds the banking regulator’s shareholding limit of 20% by one shareholder or its related companies.

Those related companies consist of two technology companies, two commercial companies and an investment firm in the northeastern province of Heilongjiang, where the bank is based.

Tomorrow Holdings control over the bank’s shares also runs counter to a statement by Harbin Bank in its application for an initial public offering (IPO) on the Chinese mainland in 2015. In its IPO filing, the small-business lender stated that it didn’t have a controlling shareholder or actual controller of sorts because its shares are held separately by different shareholders.

Harbin Bank announced it had withdrawn its mainland listing application in a company filing to the Hong Kong Stock Exchange on Friday. The bank said it made the decision “in light of possible changes in the shareholding structure regarding the domestic shares of the bank.” Harbin Bank didn’t elaborate on what those changes might be.

In the China Securities Regulatory Commission’s latest review (link in Chinese) of Harbin Bank’s listing application on Jan. 8, the regulator raised questions about 76 of the bank’s shareholders whom it was unable to contact. The shareholders own about 1.79 million of the bank’s shares, or 1.63% of the total. The regulator urged the lender to verify whether it had entrusted shares to other undisclosed trusts or shareholders that were not named on the IPO application.

Several Tomorrow Holdings-linked companies have gotten into trouble since regulators toughened oversight on the financial activities of conglomerates, which run a wide range of businesses such as real estate, coal, chemicals, insurance, securities and banking.

Tomorrow Group controls at least nine listed companies, and controls or owns shares in 30 financial institutions. The conglomerate has nearly 2 trillion yuan ($316 billion) in assets both onshore and offshore, Caixin earlier reported. The company is controlled by tycoon Xiao Jianhua, who disappeared from his Hong Kong residence in January 2017 and is believed to be assisting mainland authorities with unspecified investigations.

Notably, a growing number of companies have withdrawn their IPO applications of late. As of March 15, a total of 48 companies have suspended their IPO reviews as the CSRC’s increasingly scrutiny has intimidated companies with flawed financial statements, Caixin has learned.