By Peng Yanfeng and Liu Xiao 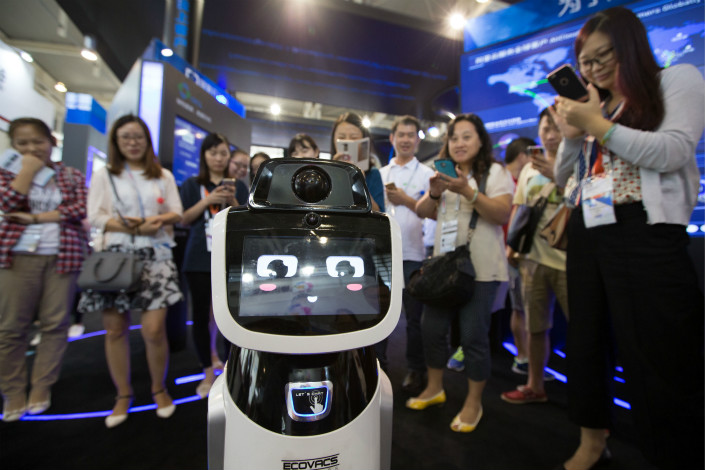 Visitors watch an Ecovacs robot on display at a trade fair in Nanjing, Jiangsu province in 2016. Photo: VCG

Jiangsu province-based Ecovacs is expected to become the first home robotics company to list on the Chinese mainland after it won regulatory approval on Monday, as regulators continue to woo technology companies to list at home.

Ecovacs, whose main product is smart vacuums, began preparing for an overseas initial public offering (IPO) as early as 2011. In 2013, IDG Capital invested an undisclosed amount to take a 10% stake in the company.

Beginning in November 2015, Ecovacs changed its plans and started to pursue a domestic listing. It carried out shareholder restructuring and reduced IDG Capital’s share to 9.12%.

“Ecovacs’ successful approval is not unrelated to recent changes to IPO policy,” an investment banker based in southern China told Caixin. “Ecovacs main product is home-use robotics, which falls under the artificial intelligence industry being encouraged by the government.”

Caixin reported earlier that the China Securities Regulatory Commission (CSRC) has been working on measures to streamline its IPO review process to entice the country’s tech startups and giants to trade their shares at home, in an effort to invigorate the domestic capital markets and boost the new economy sector.

The CSRC has told securities brokerages to help companies from sectors such as artificial intelligence, advanced manufacturing, biotech and cloud computing to list in the domestic market, Caixin has learned.

If successful, the push would reverse the trend seen in recent years in which many Chinese tech companies preferred to float in the U.S. or Hong Kong because of more flexible listing rules and access to international investors.

Ecovacs has unresolved patent disputes, including one with the British technology company Dyson, according to its IPO prospectus.

In August 2014, Dyson filed a lawsuit accusing Ecovacs of violating its patent for a wireless handheld vacuum. The case is currently being heard by the Supreme People’s Court, China’s highest court.

The product under dispute accounts for a very small part of Ecovac’s overall revenue, so the case will not have a significant impact on the company, the prospectus said.

Ecovacs plans to raise 912 million yuan on the Shanghai Stock Exchange by offering up to 40.1 million shares that account for at least 10% of its total post-IPO equity.