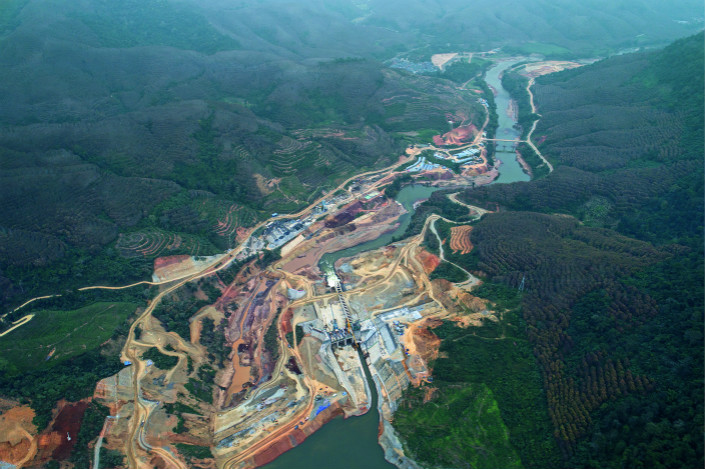 A swath of tropical rainforest on the Xiaohei River in South China's Yunnan province has been cut down to make way for the Huilongshan Hydropower Station. Liang Yingfei/Caixin

“It’s like a haircut that has gone awry in the hands of an absent-minded barber.”

That’s how many locals described the environmental scars that have been left by construction of the Huilongshan Hydropower Station inside a tropical rainforest in southwestern China’s Yunnan province since October 2015.

Trees have been felled and vegetation cleared upstream along the Xiaohei River in Yunnan’s Xishuangbanna prefecture to make way for a dam, leaving what looks like an open wound in the once pristine rainforest. Xiaohei River feeds the Luosuo River, a major tributary of the Mekong River.

The hydropower project is a major investment, promising windfall gains, according to the local government of the impoverished area. The exact amount of investment is unknown, but if all goes according to plan, the project is slated for completion by April 2020. It will generate “much-needed electricity” for the prefecture’s 1 million-plus population, officials said.

But, Yunnan province is grappling with a hydropower supply glut due to decades of dam development along the Mekong. Fourteen dams have been built along the section of the Mekong River flowing through Yunnan since the first Manwan Hydropower Station was built in 1995, decimating habitats, several conservationists told Caixin.

This has added fuel to the already fierce opposition from scientists and advocacy groups who accuse local authorities of approving the project despite a flawed environmental impact assessment. Critics say the project will damage a natural reserve upstream, which is home to endangered species such as the Asian elephant, and a downstream reserve for tropical aquatic animals.

“There are so many hydropower stations in Yunnan, I really can’t understand why we have to destroy this tributary, especially because it’s the last sanctuary for aquatic life along the Mekong,” said Chen Yinrui, a renowned ichthyologist in the province.

The Mekong, which is known as the Lancang River in Chinese, is a major Southeast Asian waterway that originates in China’s Qinghai province and flows through Tibet and Yunnan before entering neighboring Laos and crisscrossing through Cambodia, Thailand and Myanmar on its way to Vietnam.

Escorted by local villagers, Caixin reporters recently took a kayak tour along the Xiaohei River, upstream from the dam. Giant trees with thick trunks — one to two meters in diameter — had been sawn down and left to litter the a 15-kilometer (9.32 miles) belt on both sides of the river. The vegetation was withering, laying bare the yellow soil underneath.

Areas that will be flooded by the hydropower project must be cleared out in advance to protect the dam, according to Friends of Nature, a conservation advocacy group in Beijing.

A 35-kilometer strip upstream from Xiaohei River was stripped of all vegetation to allow for water levels to rise once the dam is in place, according to the conservation group. Among the trees and plants that have been destroyed are some endangered species including Caryota urens, a flowering plant in the palm family, and Tetramelaceae, both of which are on a national list for protected species.

Conservationists also fear the project will have an adverse effect on the Xishuangbanna National Nature Reserve, one of the few remaining rainforests in China.

The nature reserve consists of five separate units. Three of them — Mengyang, Mengla, Menglun — are linked by two artificial “bio-corridors.”

The Xiaohei River flows alongside the Mengyang unit and the corridor linking it to Menglun, which raises concerns that some of these reserves might get flooded, threatening not only plant species, but also endangered animals such as the Asian elephant.

Volunteers from Friends of Nature even found a rock inscribed with a red Chinese character meaning “reserve,” in the area around the river cleared of trees and plants, indicating that the dam construction work has encroached into land that is part of the reserve.

The dam will also block many fish species that migrate from Mekong River back to breeding grounds further upstream along the Luosuo River, according to several conservationists including Liu Yongjun, a marine biologist.

However, the developer of the dam by a local subsidiary of China Resources Power Holdings Co. owned by Chinese conglomerate China Resources (Holdings) Co. Ltd., failed to mention the potential risk of flooding this bio-corridor in its environmental impact study, according to the nongovernmental organization (NGO).

The reserve is already fragmented due to massive rubber plantations created in the 1960s and ‘70s, and the latest development project could decimate the local Asian elephant population, according to professor Wu Zhaolu with Yunnan University’s Institute of Ecology and Geobotany.

The artificial corridors were designed to allow wild elephants to migrate among different units of the reserve to forage for food or look for mates, according to Wu, who was involved in planning of the areas.

“The Huilongshan Hydropower Station is built right along one of the corridors, making it difficult for elephants to move from Mengyang to Menglun,” he said.

Elephants are now confined to smaller areas at a lower altitude close to residential homes, resulting in a rising number of deadly attacks on villagers, according to Wu.

A wild elephant roamed into Mansha village, in Mengla county, on March 9, crushing a 55-year-old woman to death, according to the county government.

Friends of Nature, in late February, filed a lawsuit with a local court in Yunnan against the China Resources’ subsidiary and another company hired by the developer to conduct the environmental impact study. The suit said the study was flawed. The NGO is demanding that the developer stop logging and address potential threats from past development to the nature reserve and the fish reserve downstream.

The group said it hopes that the lawsuit, which is still pending, could put a stop on the development.

Representatives from the China Resources’ subsidiary and Kunming Engineering Corp., which conducted the environmental impact study, have refused to answer Caixin’s questions.

China Resources Power, the developer’s parent company, said it has suspended the dam development project after its logging license expired in December, but the company didn’t say if it would apply for a new one.

The Forestry Department of Xishuangbanna prefecture, which is in charge of issuing logging licenses, said it has not received any license renewal application from the company.

Meanwhile, a group of scientists who were recently dispatched to survey areas threatened by flooding, found plots with plant species endemic to tropical rain forests, according to Zhong Mingchuan, who heads a division overseeing the nature reserve at the forestry department. But, these areas don’t fall within the boundaries of the reserve, but “very close” to it, she said. The marker stone, which demarcates the areas that are part of the reserve, was meant to scare local villagers away, as well as stop poaching and illicit logging inside the reserve, according to Zhong.

The damming of the river would push its water level to 650 meters above sea level, about 17 meters below the border of the natural reserve, the Kunming Engineering Corp. said in the environmental impact report, citing an official document from the Xishuangbanna prefecture government.

The local government was at odds with conservation norms, which use waterways or roads instead of altitude to mark borders of natural reserves, according to a botanist who asked not to be named.

No place to spawn

Scientists and conservationists have also opposed the construction of the dam because the hydropower project would deal a fatal blow to a fish reserve downstream by preventing many fish species from migrating to their traditional upstream spawning grounds.

Among the 112 fish species found in the Luosuo River, 27 are native to Yunnan. Nine are under national protection because they are endangered, and three others are under provincial protection, according to professor Chen Yinrui, a former research fellow with the Chinese Academy of Sciences’ Kunming Institute of Zoology

The fish reserve along the Luosou River was built to neutralize the impact of more than a dozen hydropower dams built along the Mekong River over the past 20 years, Chen said.

When the reserve for aquatic life was established in 2006, the General Administration of Environmental Protection, the predecessor of China’s Ministry of Ecological Environment, said that no dams should be built along the Luosou River.

But the local government argues that it’s not compulsory to follow “this recommendation.” It said that it was given the green light by the provincial economic planning body, the Yunnan Development and Reform Commission, to go ahead with the hydropower project in 2012.

Developers have taken several precautions to address the impact from the dam on fish species in the river including creating a “simulated breeding ground,” according to the environmental impact study for the dam.

However, such measures have been dismissed by experts as “fighting a battle on paper.”

The dam would fundamentally change important features of the river, including the temperature of water flowing downstream and patterns of seasonal flooding, according to Liu Yongjun.

“Another critical problem is the changes to the ion concentration and other properties of river water resulting from the potential reduction in silt in the river,” he said. “All of this would have a major impact on the migration of fish and their breeding patterns — and even cause some fish to stop spawning.”