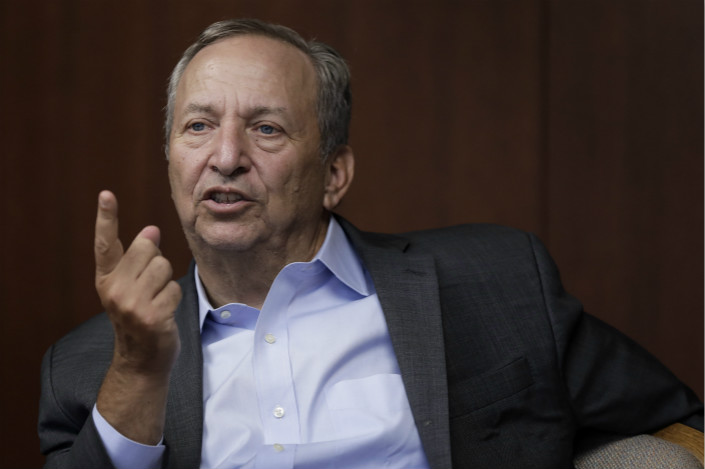 Lawrence Summers, a former U.S. Treasury Secretary pictured here speaking at a 2016 workshop in Tokyo, warned of 'surly nationalism and anger' in the U.S. and Europe at the China Development Forum in Beijing Saturday. Photo: VCG

China must recognize that current trade tensions with the U.S. are not just about President Donald Trump, former U.S. Treasury Secretary Lawrence Summers said on Saturday, urging both sides to see that neither can succeed without the other.

“I do not remember a moment when I had more long-term concern about the future of the U.S.-China global economic relationship,” said Summers, speaking at the China Development Forum in Beijing.

Proposed U.S. punitive tariffs on at least $50 billion worth of Chinese goods were announced Thursday following a seven-month investigation into China’s trade practices. In response, Beijing said it planned to enforce its own tariffs on certain imports from the U.S., including fresh fruit, nuts, wines, pork and recycled aluminum.

China should understand its economic success has had an adverse impact on tens of millions of Americans, said Summers. Trump's presidency reflects a broad change in attitudes toward China, he said, quoting entrepreneur Peter Thiel on the U.S. president — take him seriously but not literally.

Economic realities connecting the U.S. and China are unprecedented, Summers said, adding that there has never been a time when the world's largest and the world's leading economy are so different. China's per capita income is just 25% of that of the U.S., for instance, yet China has leading companies in cutting-edge sectors of the economy, he said.

“Surly nationalism and anger” in the U.S. and Europe are adding to global economic woes, Summers told Caixin in an interview earlier this month. While countries should prioritize the economic welfare of their own people, they shouldn’t harm citizens of other nations with their decisions, he said during the interview, calling for “responsible nationalism.”

The biggest effects of a trade war would be psychological, with economic effects being minimal, Summers said at the forum. Talks should move beyond trade to key issues that will shape the long-term U.S.-China relationship, such as regional security, rules on data exchanges, and protocols for state activities in cyberspace, he said.

Though he could see plausible narratives in which either both China and the U.S. were succeeding or failing in 30 years, he could not see one where only one succeeds, Summers said. “Co-dependency, not by choice but by fate, is the reality of the early- mid-21st century,” he said.