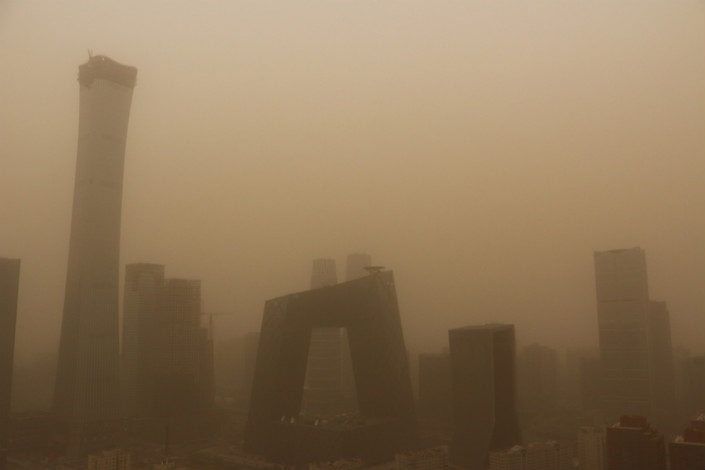 Beijing’s first sandstorm of the year arrived during an ongoing bout of smog Wednesday, creating hazardous air conditions in the capital and surrounding regions.

Among the most affected areas was Hebei province’s Zhangjiakou, a city that will host several events of the Beijing 2022 Winter Olympics.

As the dust pall moved south, more cities were shrouded in brown air, including the northern port city of Tianjin.

The sandstorm coincided with the third major bout of smog to hit northern China this year, which triggered an orange alert in more than 34 cities.

In Beijing, the Air Quality Index, which measures six major pollutants, surpassed 500, the maximum level detected by monitors. The off-the-charts number was largely due to excessive levels of PM10 particles brought in by the sandstorm, according to China’s Ministry of Ecology and Environment.

Both PM10 and PM2.5 are linked to several health conditions, including lung cancer, according to the World Health Organization.

Early Wednesday, the National Meteorological Center issued a blue sandstorm alert, warning of an east-bound strip of dust and sand moving from the Xinjiang Uygur autonomous region in western China, through the Inner Mongolia autonomous region, all the way to the northeastern province of Heilongjiang.

The results of deforestation, sandstorms often plagued northern China in the winter and spring decades ago, but have become less frequent in recent years thanks to years of tree-planting. The blue alert is the lowest on a four-tier color-coded warning system.

The ministry attributed the smog to the lifting of curbs on manufacturing activity in northern China as the winter ended, and to a lack of southbound wind from rising temperatures.