Education Ministry to Get Strict with Extracurricular-Class Providers 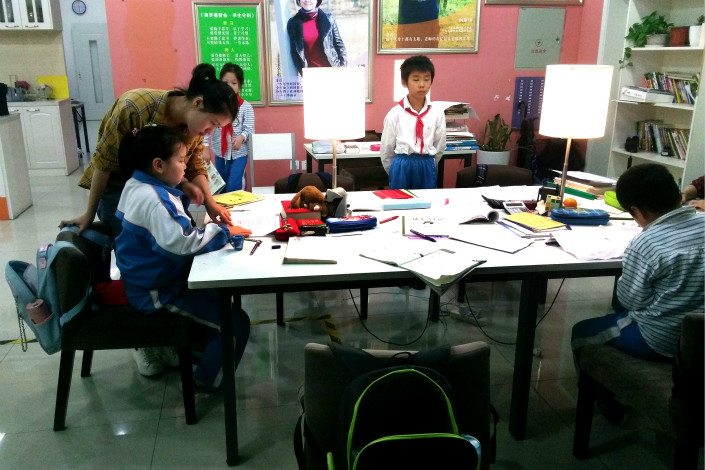 An extracurricular tutorial class is held in Shanghai in October 2016. Photo: VCG

China’s Education Ministry on Wednesday issued guidelines for enforcing recently issued rules on extracurricular-education providers, which have been criticized for the extra stress they place on children.

The ministry took aim at the country’s out-of-control private-tutoring sector with rules aimed at “reducing the extracurricular burdens of elementary and middle school students,” published in February. (link in Chinese)

According to the rules, companies offering extracurricular lessons that have business permits but not school permits must apply to become licensed as schools. Organizations that are not officially schools must also refrain from organizing exams or competitions for elementary and middle school students, and official schools must not link their acceptance of students to students’ performance in these organizations’ classes or exams.

Wednesday’s notice calls on provincial-level governments to issue plans to tackle noncompliant extracurricular education by mid-April, and say that government investigation teams should conduct community visits and parent surveys, among other measures, to determine the scope of the problem.

Some localities have already begun a crackdown on extracurricular-education providers. Earlier this year, Shanghai called off major academic competitions like the popular “Elegant English Evaluation (3E)” test, run by a Hong Kong-registered company that advertised itself with the official-sounding name “China Elementary and Middle Schools Bilingual Education Association Co.,” the Shanghai Daily reported.

Tests like 3E are popular among parents who hope to give their children a leg up when applying to private schools.

China has long struggled to rein in its extracurricular-education sector, but Premier Li Keqiang’s remarks on the problem of unregulated private tutoring during China’s “Two Sessions” legislative meetings this year have brought the issue back into the spotlight.