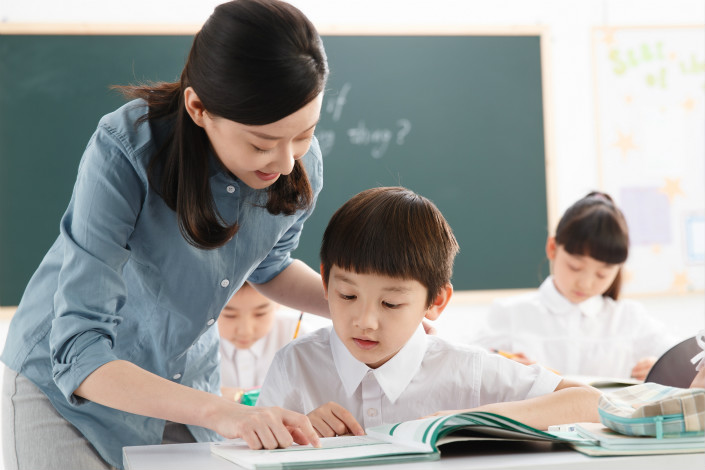 Onesmart intends to increase its number of tuition centers in China, which now stands at 225, by 30% annually over the next five years. Photo: VCG

OneSmart International Education Group Ltd., which went public in the U.S. on Wednesday, is eyeing mergers and acquisitions in North America and Europe to expand its global footprint over the next five years.

The Shanghai-based educator has been on the lookout for prospective targets, though there won’t be anything big this year, said company founder and CEO Steve Zhang.

“We want to expand into these markets progressively and make selective acquisitions,” he told Caixin, adding that classes such as Chinese and mathematics could be of interest to overseas learners.

OneSmart shares closed down 1.82% to $10.80 in their debut on the New York Stock Exchange, below their listing price of $11. The initial public offering (IPO) raised $179.3 million.

The company had planned to raise as much as $196 million by offering 16.3 million American depository shares at a price ranging from $11 to $13 a piece.

Zhang said OneSmart’s focus for the next three years remains on China, where the after-school class business is booming thanks to rising incomes and a powerful parental desire for their children to receive the best education available.

Onesmart intends to increase its number of tuition centers in China by 30% annually over the next five years. The company had 225 centers across 42 cities at the end of last year.

According to research firm Frost & Sullivan, China’s premium after-school education market for primary and secondary students was worth 94.6 billion yuan in 2017. The firm estimated the market’s value will to grow to 195.5 billion yuan by 2022.

Another educator, Sunlands Online Education Group, which specializes in adult learning, saw its shares tank 10.48% to $9.57 on Wednesday following its debut on Friday. Sunlands ended up setting its IPO price at the lower end of its estimate ranged. The company raised $150 million.

China’s thriving education sector has spawned a wave of IPOs since the start of 2017.

At least seven Chinese education companies had overseas IPOs in 2017. In their debuts in Hong Kong, China Yuhua Education Corp. raised $240 million and Minsheng Education Group’s raised $196 million, making them two of the largest education listings of the year.