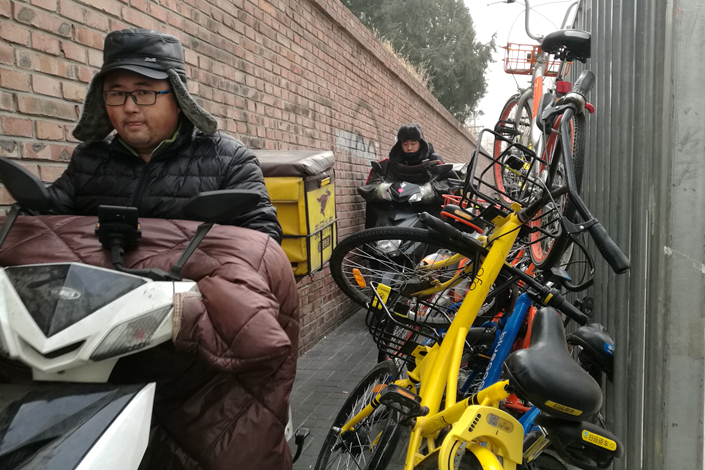 Deliverymen for Meituan's food takeout service ride past a heap of shared bikes from Mobike, Ofo and other companies in Beijing on Dec. 29. Photo: Wu Gang/Caixin

*Meituan expressed interest in investing in Mobike as early as late 2017, but the deal was put on hold due to objections from a major investor

The deal was brokered by Pony Ma, CEO of Tencent Holdings Ltd., which is a big backer of Meituan, sources close to the matter told Caixin.

The sources added that Meituan expressed interest in investing in Beijing Mobike Technology Co. Ltd. as early as late 2017, but the deal was put on hold due to objections from Li Bin, Mobike’s chairman and an angel investor in the company.

A Meituan representative refused to comment on the report, though a source close to Meituan’s board said the amount is incorrect because the deal is not yet sealed.

Caixin learned that talks about a possible merger started in October. Mobike’s largest shareholder, Tencent, and Ofo’s top investor Didi Chuxing, reached a preliminary agreement on a merger plan that would have given Didi greater control over the new company.

A market source said a merger between Mobike and Ofo would have been of more benefit to Didi, which dominates the ride-hailing business with 20 million bookings a day. As a result, both Mobike's and Ofo’s respective management teams vehemently rejected the proposal because they feared giving Didi too much control, Caixin has learned.

Ofo, which reportedly has been under financial pressure since mid-2017, then began to seek funding from Alibaba Group Holding Ltd. and its fintech affiliate, Ant Financial Services Group, in November. Last month, Ofo said it secured $866 million in funding from a group led by Alibaba.

Sources told Caixin that Didi, which previously objected to Alibaba taking a larger stake in Ofo, has agreed to allow Ant Financial to invest in the bike-sharing company.

Meituan, which has already rolled out ride-sharing services in Nanjing and Shanghai, is ramping up its own efforts in the ride-hailing business.

Meituan’s entry into the shared-bike business is expected to complicate the fiercely competitive sector, which has increasingly seen as a new battlefield for the competing mobile payment platforms of tech giants Tencent and Alibaba.