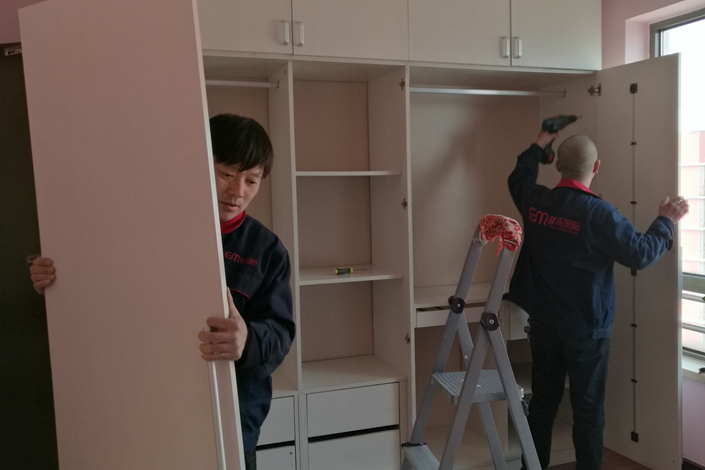 Moving-company workers disassemble a cabinet while moving furniture out of a home in Beijing on March 24. Photo: Wu Gang/Caixin

Service activity in China expanded at its slowest rate in four months in March as the increase in new business weakened — a further sign that growth of the world’s second-largest economy was becoming tepid, a Caixin survey showed.

The Caixin China General Services Business Activity Index declined to 52.3 last month, down from 54.2 in February and the worst reading since November. A number above 50 indicates an expansion in activity, while a figure below that points to a contraction.

The fall, combined with the drop of the Caixin China General Manufacturing Purchasing Managers’ Index (PMI) to a fourth-month low of 51 in March, drove the Caixin China Composite Output Index that covers both manufacturers and service providers down to 51.8 last month, also the weakest since November.

The deteriorating operating conditions in both the manufacturing and services sectors showed “the growth momentum of the Chinese economy weakened in March,” said Zhong Zhengsheng, director of macroeconomic analysis at CEBM Group, a subsidiary of Caixin Insight Group.

New orders placed at services providers rose at their slowest rate since October in March, with some companies citing concerns over exchange-rate movements and lower tourist numbers, according to the survey.

The firms continued to add to their payrolls, but at the slowest rate in 19 months.

“Both new business and employment grew at a slower rate last month, pointing to cooling demand,” Zhong said, noting that the situation has affected services firms’ confidence as the indicator gauging their expectations toward business activity over the coming 12 months dipped to a six-month low in March.

The services sector includes finance, real estate services, marketing, transportation and retailing. Also known as the tertiary sector, it accounted for 51.6% of the country’s economic output last year, the same as in 2016 and up from 50.2% in 2015, according to the National Bureau of Statistics (NBS). The services sector is more labor-intensive than manufacturing, and policymakers are counting on it to create jobs. It accounted for 58.8% of growth in gross domestic product in 2017, dwarfing the 36.3% contribution of the industrial sector, NBS figures showed.

The official nonmanufacturing PMI, which covers the services and construction industries, rose to 54.6 in March from 54.4 in the previous month, data released by the NBS over the weekend showed. The rise was bolstered by a surge in new construction starts as the weather warmed and infrastructure projects sped up. The subindex gauging service activity fell to 53.6 last month from 53.8 in February.

The official composite PMI came in at 54 in March, up from 52.9 in February, according to the NBS.