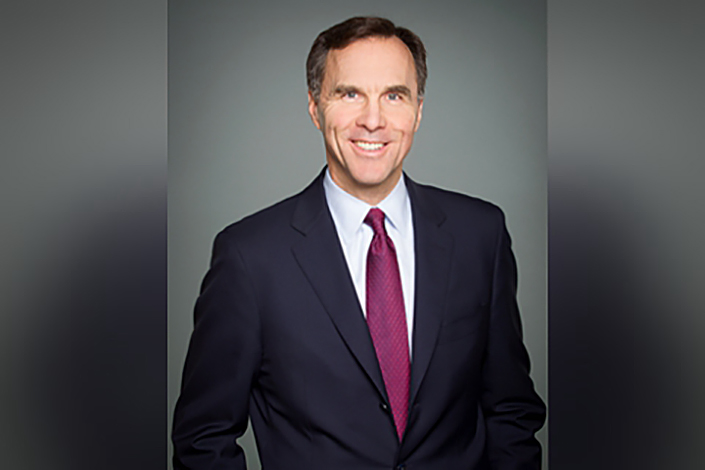 Editor’s Note: While the escalating trade tensions between China and the U.S. have been drawing international attention, other countries are also watching the situation and re-evaluating their ties with China. In an interview with Caixin reporter Jiang Fei in Shanghai on Monday, Canadian Finance Minister Bill Morneau, who was visiting Hong Kong and Shanghai to meet local government officials and businesspeople, expressed his views on the sense of anxiety among industrial countries, and how Canada will continue to welcome investors, including those from China, who are seeking business cooperation in energy, resources and other sectors. He also expressed optimism over the long-term effect of China’s recent regulatory tightening.

Jiang: What is your view on the recent tensions among the major economies in the world?

Morneau: There is a sense of anxiety in industrialized countries, which is emanating from a couple of important dynamics. One is the increasing change in people’s job opportunities because of automation and, to a certain extent, because of globalization. And the other is rising inequality in some of the new fields in particular that give rise to economics that advantage a small number of people with a relatively small number of workers.

So I think the observation that there are underlying challenges is valid.

But I do think that at the G-20, or among G-7 countries, there is a consensus that there are opportunities for all economies through increased trade.

I have a level of optimism that notwithstanding the current challenges, we will find a way to continue with the positive aspects of trade.

Mr. Minister, you just spoke of rules. Are the old rules still valid or do they need to be updated?

There is some updating going on. Our negotiations with NAFTA (countries) are an example of the need to continually refresh trading relationships. We are in the midst of renegotiation and we are cautiously optimistic that will lead to a better outcome for all three countries (Canada, Mexico and the U.S.) over time.

Like any other commercial relationship of any sort, there is a need for constant refreshing, and I think we are seeing that in some ways, that is representing current challenges. But I’m optimistic we will get through this.

Should developed countries make an effort to keep their lead in the technology sector instead of blocking others from stepping up?

Fundamentally, we see the course of future innovation is going to require collaboration.

We see that the need to collaborate across borders is, if anything, more important today than it was five years or 25 years ago. Our view as a country is that we should be enabling that. The way for us to create success in Canada is to be thinking about how are we successful at investing in science and research, so keeping ourselves ahead in the places where we already are strong and how are we enabling people to get access to the kind of education and training that they need to be successful is how we create exciting opportunities in Canada. As a byproduct, there may well be exciting opportunities somewhere else, perhaps in China, because we collaborate together. We see it as a win-win, not a win-lose.

In the last decade or so, the big theme of China’s investment in Canada has been the energy and resources sectors. But they haven’t performed well overall. Going forward, do you think there are still opportunities for Chinese investment in these sectors?

I think there are still opportunities for continued investment. As a government we’ve been clear that we want to continue to have investment in the resources sector. We’ve identified the need for pipelines to get oil and gas resources to market as critically important, which will help those investments to be more successful.

We see there’s been significant interest in another sector in the Canadian economy among Chinese investors recently in things like retirement homes, (in the province of) British Columbia as an example. But we expect there to be also investment in the technology sector, in place where we can collaborate to have a long-term impact. It’s not just the oil and gas sector that’s important in Canada. We have a diversified economy that has been successful even with lower oil prices.

Is there an opportunity for Chinese companies to come to Canada and help build infrastructure on the Pacific coast to ship oil and gas from Canada and elsewhere to the world?

We would imagine on an ongoing basis that there are other opportunities in liquefied natural gas. We’ve approved a project in British Columbia that provides a significant opportunity, and one that includes I believe some Asian investors — PetroChina. So the answer is yes, and as we look forward, we are welcoming experts in these areas to be part of the consortium, or lead the consortium themselves. As a government, we would be agnostic in terms of nationality as long as there’s a benefit from the investment.

Are you hearing from the Canadian business communities that the market is sufficiently open to them? China recently reorganized its entire financial regulatory system. What is the impact of that on Canadian firms here?

What I’ve heard from Canadian investors is that they continue to be enthused with the opportunities to make investments in China, that they continue to see the long-term potential from those investments. We have heard from those investors and economists that the changes proposed in China will result in some deleveraging in the market, which sounds like a positive long-term shift for the Chinese economy.

What we heard from the standpoint of regulatory framework, specifically in discussions with banking and insurance company representatives, is that they see a tightening of the regulatory approach will reduce some business practices that could be causing challenges, specifically in the insurance sector. Their estimation is that it’s a long-term positive for their business sector because it will encourage appropriate discipline around product design and appropriateness of the goals that the institutions should be seeking. In the case of insurance, for example, making sure that they are actually (involved in) insurance.