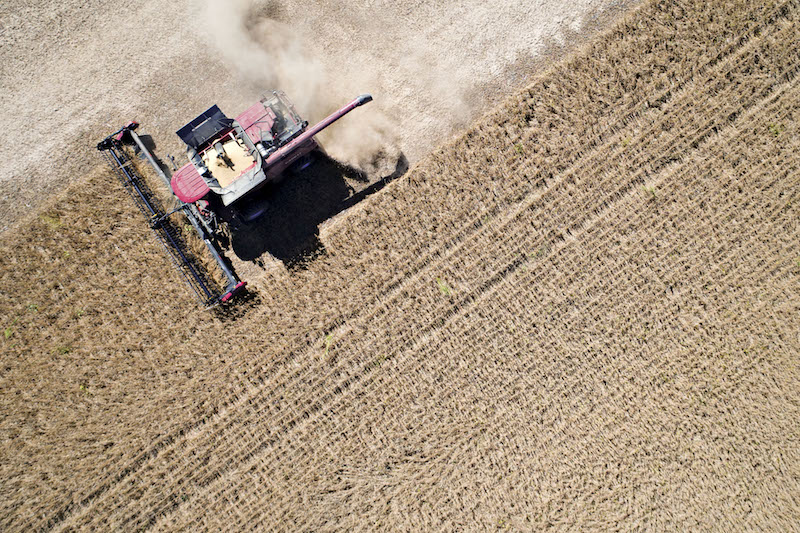 American soybeans, like these being harvested in Illinois, are on the list of targeted products by Beijing in response to U.S. threatened tariffs. Photo: VCG

Electric car-maker Tesla Inc. and soybean farmers would likely feel the most painful sting of China’s threatened retaliatory trade tariffs against the U.S.

Boeing Co. could also be hurt by Beijing’s response to President Donald Trump’s 25% tariffs on up to $50 billion of annual imports from China. It might get off comparatively easy, however, because China’s proposed duties take aim at lighter aircraft and the U.S. aircraft-maker is moving to a generation of heavier jets.

The U.S. Trade Representative (USTR) office is collecting public comment on the proposed list until May 22. China’s Ministry of Finance said the planned tariff will become effective “pending the implementation” of additional tariffs by the U.S.

The escalating trade tensions have sent shockwaves to global markets. Major U.S. stock benchmarks opened sharply lower on Wednesday, led by automakers and aircraft manufacturers that are expected to be high on the U.S. casualty list. The U.S. benchmarks seesawed by the end of the day, ending up after investor optimism grew that the world’s first and second-largest economies might step back from their heated trade exchanges.

China imported 280,000 units of U.S. produced vehicles in 2017, with a total value of $13.1 billion, according to Cui Dongshu, secretary-general of China Passenger Car Association. That represents 26% of China’s total auto imports last year.

The additional tariffs will hurt the competitiveness of U.S.-made vehicles in China, where their target car buyers are often price-sensitive, Li said.

U.S. automakers that produce in other countries could ship from those locations to circumvent the tariff. But Tesla would be particularly hard hit because all of its exports to China are of cars made in the U.S.

Tesla sold more than $2 billion worth of vehicles in China last year, it has said. Tesla hasn’t detailed how many cars were sold, but Cui estimates the automaker sold about 2,380 units in the first two months of this year. Tesla is planning a manufacturing base in China to build its moderately priced electric vehicles, but said in November that it didn’t expect production to begin before about three years.

General Motors Co., which operates 13 assembly plants in China, told Caixin that it sold 1,247 imported vehicles in China last year, a small portion of its more than 4 million units sold annually in the country.

A crop of problems for U.S. farmers

Soybean farmers could be hit hard. China was the largest importer of U.S. soybeans last year, buying $15 billion worth of the beans or one third of the total soybean exports of the U.S.

Farmers in the U.S. Midwest, where most soybeans are grown, would be especially affected.

Zhang Xiaoping, China director of the U.S. Soybean Export Council, told Caixin that a recent study showed that an additional 30% tariff levy would cause a 71% decline of U.S. soybean exports to China, adding to the problems of U.S. farmers amid falling prices. Beijing is considering a 25% tariff on US. soybeans.

China is the world’s largest consumer of soybeans, which it uses mainly for oil pressing and pig feed. Last year, China imported a record of 95.5 million tons of soybean, a rise of 13.9% from the previous year. Brazil and the U.S. are the top exporters of the bean to China.

The impact of tariff on soybean will also spill over to Chinese businesses and consumers, said Cheng Guoqiang, a professor at Tongji University in Shanghai. “Many domestic businesses are worried and have to look for new suppliers,” Cheng said.

The trade war is hurting both sides, Cheng said. “It is a reversible trend that China will mainly rely on imports for soybean supplies,” he said.

Experts say business jets and single-aisle jets would be most affected.

The Boeing 737 and Airbus A320 families dominate the global single-aisle jet market. In 2017, Boeing delivered 202 aircrafts to China.

But the impact of a tariff on Boeing might be blunted because of its plan to shift from lighter 737 models to the new MAX series, most of which are heavier than 45,000 kilograms, said an aviation industry analyst. Boeing is set to stop production of its 737 NG series by 2019.

Also, Boeing has built its first China production facility in Zhoushan, Zhejiang province, and plans to deliver its first aircraft produced there by the end of this year.

Boeing declined to comment. The company’s New York-traded shares led the decline on Monday with a 1.02% drop to close at $327.44.