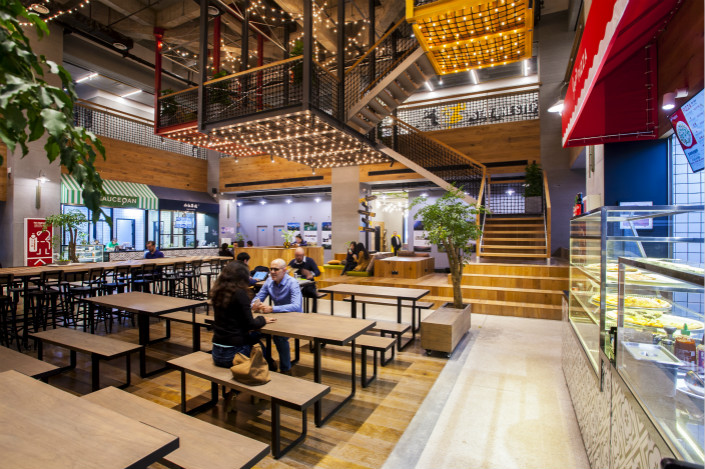 A Naked Hub shared-workspace office is seen in Shanghai on Nov. 6. Photo: VCG

After shared-workspace provider WeWork said it will acquire one of its China-based rivals, Naked Hub, its top Chinese rival Ucommune vowed to take its own action on mergers and acquisitions (M&A).

"We (Ucommune) foresee major moves on M&A front from our side in the near future," said founder and chairman Mao Daqing, in response to a WeWork purchase disclosed on Thursday.

WeWork co-founder and CEO Adam Neumann hinted at the deal in a blog post on Thursday, and the deal has been widely covered by both the Chinese and foreign media since Wednesday.

“We are joining forces with Naked Hub,” Neumann wrote. “We will have a profound impact in helping businesses across China grow, scale, and succeed.”

The financial details of the acquisition haven’t been disclosed, though the deal could be worth $400 million, Bloomberg reported, citing two people familiar with the matter.

WeWork’s acquisition of Naked Hub will help it increase its presence in China. Naked Hub, launched in 2015, has 26 locations in Shanghai, Beijing and Hong Kong.

The U.S. co-working-space giant entered the China market in 2016 and has been expanding its presence vigorously, with 16 locations in Beijing, Shanghai and Hong Kong. It plans to have 40 locations this year, according to Neumann.

WeWork scored a $500 million investment in July from SoftBank and Hony Capital to fund its expansion in China.

Ucommune, together with the smaller brands, operates more than 100 spaces in dozens of Chinese cities. It even stepped into WeWork’s turf in the U.S., setting up locations in New York City, Los Angeles and San Francisco.

In an attempt to stop its rival’s global expansion, WeWork filed a trademark lawsuit in the U.S. against UrWork, arguing the Chinese startup’s name was “confusingly similar.” UrWork subsequently changed its English name to Ucommune.

This story has been updated to add Ucommune's response to the deal.