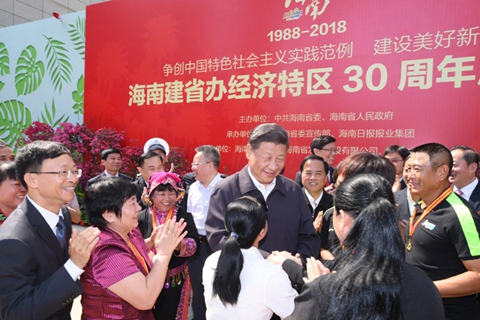 Chinese president Xi Jinping at an exhibition in Haikou, Hainan province, on Friday to mark the 30th anniversary of the launch of the island as a special economic zone. Photo: Xinhua

The ruling Communist Party has given the go-ahead to a plan to turn the southern island province of Hainan into a free trade zone (FTZ) to facilitate further reform and opening up of the world’s second largest economy.

The decision was announced Friday by Chinese President Xi Jinping during a celebration in Haikou, the province’s capital, to mark the 30th anniversary of the launch of the island region as a special economic zone.

The move just came days after Xi promised lower tariffs on car imports, harsher punishment for intellectual property rights violations and the further opening of the financial sector in apparent overtures to cool tensions between China and the United States over the bilateral trade imbalance.

Xi did not offer a specific timeframe for developing the Hainan FTZ or how it will operate. “But the plan demonstrates our commitment to further reform and opening up and the resolve to actively push ahead with globalization,” he said.

The upgrading of Hainan from special economic zone to free trade zone will allow it to serve as test ground for deeper reform and greater environmental conservation as well as a center for international tourism, he said.

A special economic zone has tax and other business incentives to attract foreign business but still operates under Chinese domestic import and export rules. In a free trade zone, goods can be imported, manufactured and re-exported without intervention by Chinese customs.

Hainan has unique advantages – particularly its geographical separation from the rest of the Chinese mainland -- that make it a good place to experiment on the country’s further reforms, Xi said.

China already has 11 small-scale FTZs in operation or under development, including the Shanghai Free Trade Zone launched late in September 2013.