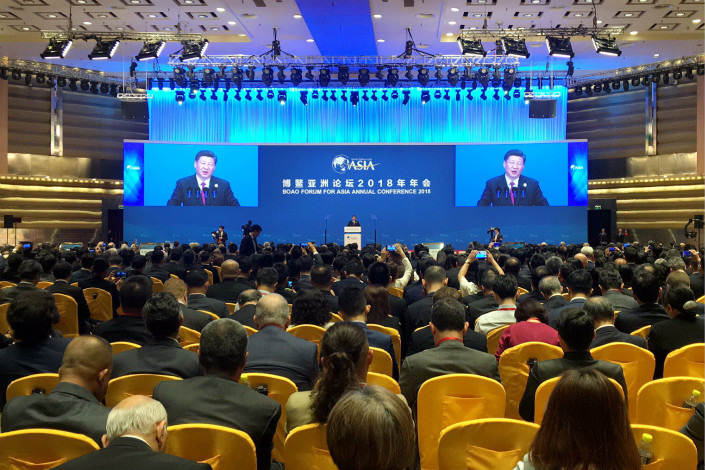 *Chinese President Xi Jinping reiterated promises to open up the country’s economy to foreign investors, saying change would come ‘as soon as possible’

In the speech — which never mentioned the trade spat between the countries — Xi said China will cut tariffs on different imports this year, with levies on foreign-made automobiles to be reduced “by significant margins” this year as the country “truly hopes to increase imports” to balance trade with other countries. China has since 2006 maintained a 25% tariff on car imports.

Meanwhile, the long-discussed policy of loosening restrictions on foreign investors’ shareholding in car manufacturing joint ventures and other sectors such as aircraft and ship manufacturing will be implemented “as soon as possible,” he said at the Boao Forum for Asia Annual Conference, an economic event held in the country’s southern province of Hainan. Currently, foreign companies are required to tie up with a local partner to make vehicles in China, with their ownership capped at 50%. Each foreign company can have a maximum of two joint ventures making the same category of vehicles in the country.

The country will also expedite the promised opening of the insurance sector, relaxing limits on foreign firms’ establishment of subsidiaries in China and allowing them a greater business scope, Xi said. He also promised to “make sure” measures announced late last year to reduce restrictions on foreign investors’ shareholding in their China joint ventures in the banking, securities and insurance sectors will be implemented this year.

“I would like to emphasize that we will implement these major opening-up measures as soon as possible … so that their effects will benefit Chinese companies and Chinese people as well as firms and the people of different countries at an early date,” he told the audience.

Although what Xi said marked no major shift in the policies he and other Chinese officials have promoted in recent years, it signals areas in which the country is willing to address U.S. concerns amid heightened bilateral trade tensions, analysts said.

“Promises made by the top Chinese leader have very solid political legitimacy … and chances for their implementation are much higher than before,” Larry Hu, an economist with Macquarie Capital Ltd. in Hong Kong, told Caixin.

“He set a market-friendly tone for negotiations” with the U.S., he said.

Xi’s speech came after Trump on Sunday tweeted that China will “take down its Trade Barriers” to make taxes reciprocal and strike an intellectual property deal. The remarks came as tensions between the world’s top two economies intensified following escalating tit-for-tat tariff threats.

The U.S. government on April 3 unveiled a list of Chinese products worth around $50 billion that will be subject to a proposed 25% punitive tariff for alleged unfair trade practices such as intellectual property theft. Beijing quickly responded with a plan to levy potential retaliatory tariffs on U.S. goods worth a similar value, including aircraft and soybeans.

Trump on Thursday raised the stakes by claiming that he was considering a new round of tariffs on an additional $100 billion worth of Chinese imports, prompting China to vow to fight back “at all costs.”

But he predicted a “great future for both countries” in the Sunday tweet, which has been seen as an indication that trade tensions between the two countries may be de-escalating.

Xi’s comments suggested that he prefers “a cool-headed approach” toward the trade spat rather than a nationalist confrontation, Hu said.

“As such, our baseline remains that the dispute will end with concessions from China,” he wrote separately in a report.

He also downplayed concerns that China would devalue the yuan as a tool to gain an upper hand in the row. A Bloomberg News report that Beijing was considering the tactic was followed by the Chinese currency weakening by as much as 0.2 percent to 6.3186 against the U.S. dollar in the onshore market on Monday.

The fact that Xi set a timeline for the completion of some key reforms within this year indicated the government might accelerate the change, Zhu Chaoping, a global market strategist with J.P. Morgan Asset Management, said in a note.

“Investors certainly welcomed Xi reaffirming China’s commitment on these fronts,” Zhu said. “It is possible that measures announced today could help relieve global trade tensions” even though more negotiation will be required to solve the Sino-U.S. trade spat.