By Leng Cheng and Fran Wang 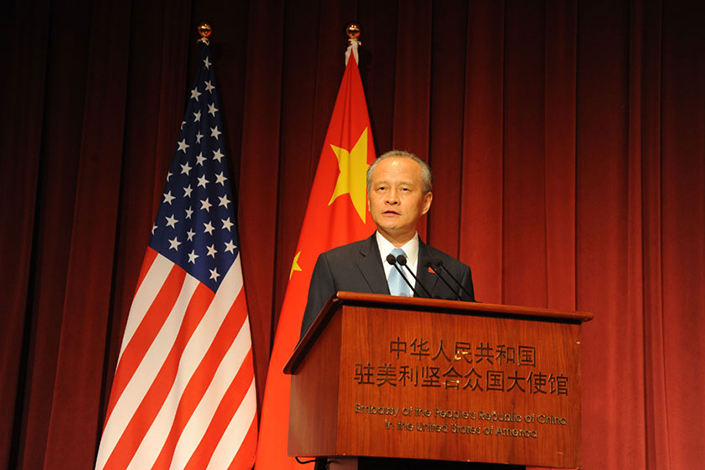 China has demanded the U.S. drop the investigation on which $50 billion in new tariffs on Chinese exports are based, as the two sides prepare for dialogue that aims to soothe concerns over a full-blown trade war.

Ambassador Cui Tiankai urged Washington to “terminate the Section 301 investigation as early as possible” in a meeting with Acting Secretary of State John J. Sullivan on Wednesday, the Chinese Embassy to the U.S. said in a statement.

He also called on the U.S. to seek a solution to bilateral differences on trade “through dialogues and consultations with the Chinese side,” according to the statement posted on Thursday. The two officials also discussed the current situation on the Korean Peninsula, it added.

The meeting between Cui and Sullivan came after the world’s top two economies exchanged threats of hefty tariffs that have intensified concerns over an escalation of trade conflict between the two and its impact on the global economy.

The U.S. on Tuesday unveiled a list of about 1,300 Chinese product lines worth a total of $50 billion that will be subject to a proposed 25% tariff, such as chemicals, metals, aircraft parts, telecommunication equipment and weapons. The move was part of an attempt by the administration of President Donald Trump to punish China for what it claims are forced technology transfers, following a seven-month investigation under the rarely used Section 301 of the Trade Act of 1974 into alleged intellectual property theft by Chinese companies.

China responded within hours with a tit-for-tat plan to impose a new 25% tax on 106 U.S. product lines including soybeans, cars and chemical goods. The products also represent nearly $50 billion of America’s annual exports. The authorities also made clear that the policy will become effective “pending the implementation of additional tariffs on Chinese products by the U.S. government.”

But both Chinese and U.S. officials have since shown a measured willingness to negotiate a solution.

“Both sides have put their concerns on the table. Now its time to negotiate about cooperation,” Zhu Guangyao, a vice minister of finance, said at a briefing on Wednesday after China announced its countermeasures. “But any negotiation and cooperation shall be premised on mutual respect, rather than one side enforcing willful conditions on the other side.”

China’s tariff threat sparked a temporary selloff in American stock on Wednesday and U.S. Commerce Secretary Wilbur Ross in an interview with the CNBC sought to downplay investors’ jitters, claiming the taxes would amount to only 0.3% of the country’s gross domestic product.

However, he also indicated that the U.S. government was open to talks

“It wouldn’t be surprising at all if the net outcome of all this is some sort of negotiation,” he said.

"I doubt if there would be any concrete actions for several months,” he told Fox News. “Nothing concrete has actually happened.”