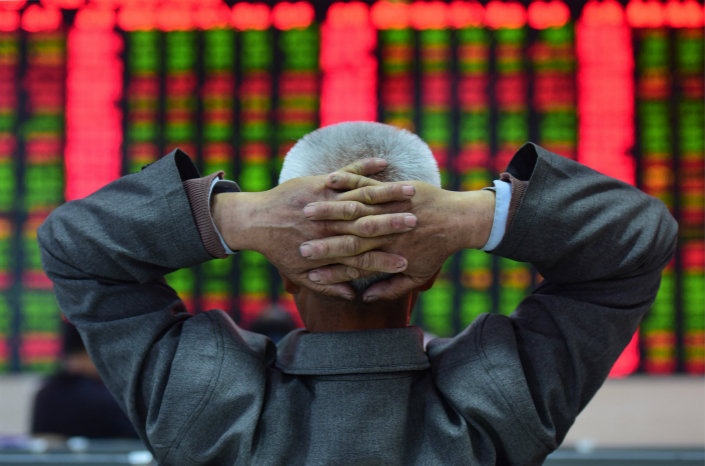 An investor watches the movement of share prices at a stock market trading hall in the eastern province on Anhui on April 13. Photo: VCG

(Beijing) - Chinese regulators are proposing to tighten disclosure requirements on shareholdings in listed companies to prevent investors from secretly building up stakes, creating a false market in the stock and harming the interests of small shareholders.

The changes come as the government steps up its campaign to curb financial risks and mark the latest move by the authorities to rein in misconduct in the stock market such as price manipulation, highly leveraged and risky purchases, and pump-and-dump schemes.

The Shanghai and Shenzhen stock exchanges released the drafts of Business Guidance on Information Disclosure of the Acquisition of and Equity Changes in Listed Companies on Friday.

“Faced with new market developments, the current regulations need to be adjusted and improved,” the Shanghai bourse said in an accompanying statement. The changes aim to “concretely prevent risks that might be triggered by the acquisition and trading of large volumes of equities.”

“Some market players have exploited their financial strength and (internal) information advantage to buy (large volumes of) shares in listed companies without making proper announcements and then quickly selling them, triggering abnormal fluctuations in the trading of the stock … and severely undermining smaller investors’ rights and interests,” the exchange said.

Others have borrowed heavily to buy shares, posing “significant potential risks” for the listed company and “endangering the stable operation of the market,” it said. Some shareholders have secretly acted in concert, evading their disclosure obligations, to make illegal gains, the bourse said.

Over the past few years, China’s stock market has been hit by a series of scandals that have exposed manipulation by institutions and dented the confidence of millions of small investors. The high leverage involved in many instances of misconduct has also aroused concerns by regulators that those lending money for share purchases could be leaving themselves open to significant risks should prices drop.

A high-profile case believed to have helped trigger this latest regulatory crackdown was that of financial and property conglomerate Baoneng, which in 2016 built up a 25.4% stake in China Vanke Co., the country’s biggest listed property developer by assets. More than 40% of its holding was paid for using borrowed funds raised through nine asset management plans (AMPs).

Evergrande Life, the insurance arm of property developer Evergrande Group, was also found to have speculated on the stock market with premiums from short-term high-yield policies. In one particular case, the insurer bought a 4.95% stake in Guangdong Meiyan Jixiang Hydropower Co. over three trading days at the end of September 2016. Although it became the largest shareholder in the listed company, the size of its holding was just below the 5% threshold that required disclosure. As the shares rose, retail investors piled in, further boosting the stock price. But Evergrande Life dumped its entire holding on Oct. 31, which sent the shares plummeting by the daily limit of 10%.

The exchanges are proposing that investors who hold 5% or more of a listed company be forced to “immediately” notify the firm if their holdings change by 1 percentage point or more, stricter than the current threshold of 5 percentage points. The listed company must then publish the information by the next trading day.

Investors must make an announcement when they become the biggest shareholder or controller of a listed company, even if their stake amounts to less than 5% of the firm’s issued share equity, according to the draft proposals, which are open for public feedback until May 13. They will also be required to explain the reasons for their purchase, their source of funding, and their plans to further increase or sell their stakes over the following six months. Currently investors are not obliged to disclose purchases of a listed firm’s shares until their holdings hit 5%, even if they are the biggest or controlling shareholder, which has given rise to speculative short-term trading that has allowed some institutions to profit at the cost of retail investors by keeping the size of their stakes just under that bar to avoid having to make a disclosure.

Investors who form partnerships with others to acquire a listed company’s shares and together become its largest or controlling shareholder will be required to clarify the ultimate source of their funding. In addition, they should disclose issues such as their plans for profit distribution, how potential losses will be covered and who is ultimately making the decisions to help regulators assess the strength of their control over the firm.

The documents also make it clear that in cases where stocks are purchased with funds raised through AMPs, ownership will be assigned to whoever exercises the voting rights. Shares held by that party through other investments must be counted together with those bought through the AMPs, and an investor must make any disclosures based on its total shareholding.