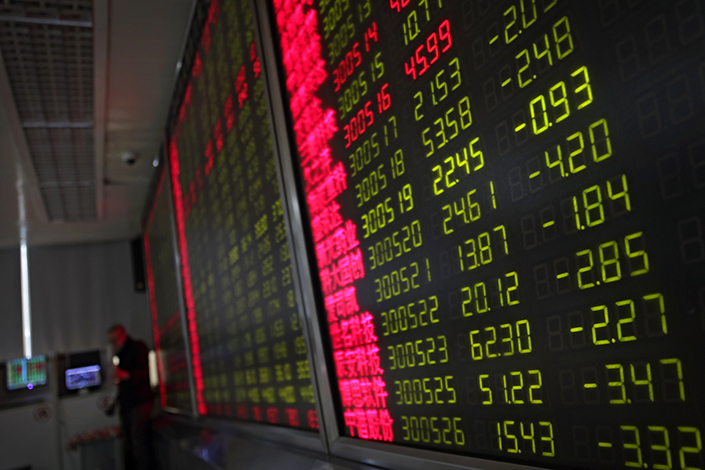 Stock splits and bonus issues have in recent years been abused as a way to execute illegal operations such as insider trading and 'pump-and-dump' schemes. Photo: IC

The Shanghai and Shenzhen bourses proposed rules to limit the number of new shares issued during stock splits and bonus issues, as regulators continue to clamp down on stock price manipulation.

Companies are banned from stock splits or bonus issues at or above the ratio of 3-for-2 if they have made a net loss during the corresponding reporting period or if their net profit dropped more than 50% year-on-year, according to draft rules released for public comments by the two stock exchanges on Wednesday. Companies whose earnings per share would fall below 0.2 yuan ($0.03) following a stock split or bonus issue also do not qualify.

Stock splits refer to when companies increase the number of shares held by existing shareholders and reduce the price of each share by a proportional amount so the company’s market capitalization remains unaffected. A stock split is often conducted when the price per share increases to a level that is unaffordable for retail investors. By increasing the number of shares while reducing the price, the companies make their shares accessible to more investors and increase the liquidity of the stock.

Bonus issues, like stock splits, are distributed based on shareholders’ current stake in the company, but differ in that they are funded by a company’s cash reserves.

However, the actions have in recent years been abused as a way to execute illegal operations such as insider trading and “pump-and-dump” schemes, the Shanghai Stock Exchange said in a statement Wednesday.

The rules aim to “limit listed companies’ from abusing stock splits and bonus issues to conduct inappropriate market value management and protect the interests of smaller investors,” according to the statement. The ultimate goal is to “encourage listed firms to focus on their core business, guide them to reasonably reward investors and attract investment with sound performance.”

Past investigations by the China Securities Regulatory Commission has revealed that networks of individuals and funds have colluded to orchestrate the timing of company announcements such as stock splits and share placements to manipulate stock prices.

The draft rules specifically target large stock splits and bonus issues that would produce more than five new shares for every 10 existing shares.

The rules stipulate that companies can only conduct such activities if they have earned profits for the last two consecutive years and that the proportion of new shares issued cannot exceed the compound growth rate of the company’s net profit over the last two years.

Some exceptions may apply, including when companies have seen their net profit continue to grow over the last two years and made earnings per share of at least 1 yuan for the last three straight years. In that case, companies can conduct stock splits or bonus issues in excess of the growth rate as long as earnings per share after the split do not drop below 0.5 yuan. Companies must also thoroughly disclose their considerations and reasoning for the move.

Regulatory actions in the past few years have significantly curbed stock splits and bonus issues. In 2017, the Shanghai bourse saw 54 companies conduct splits and bonus issues, down from 114 in 2016. For the Shenzhen bourse, only 43 firms announced plans for such offerings for the 2017 reporting period, compared with 147 in 2016 and 256 in 2015, according to the stock exchanges’ data.

Shanghai and Shenzhen will take two different approaches to evaluating stock splits and bonus issues. The Shanghai stock exchange will review plans after they are announced, where Shenzhen will review them prior to announcement, according to the draft rules. If any part of the disclosure may be misinterpreted by the market, the Shanghai bourse will require companies to provide investors with an explanation through press conferences or other means, the exchange said.