By Li Mingming and Denise Jia 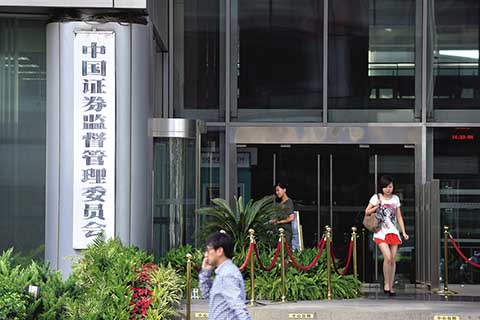 The headquarters of the China Securities Regulatory Commission is seen in Beijing. Photo: VCG

China's securities regulator on Wednesday fined a company 5.67 billion yuan ($870 million) for manipulating share prices, a record penalty for the regulator as China steps up its crackdown on illicit activities in the financial markets.

Beibadao set up a team of traders who used borrowed money in more than 300 stock trading accounts under the names of the company’s employees and relevant personnel to manipulate share prices of companies including Zhangjiagang Rural Commercial Bank, Jiangyin Rural Commercial Bank, and Guangzhou Hoshion Industrial Aluminium, the CSRC said.

Its traders took advantage of a limited number of shares available for trading during the lock-up period after initial public offerings. They poured in huge amount of funds to buy stocks to boost their prices, enticing retail investors speculating there might be positive news about the companies, and then dumped the shares in short-term trading.

Prices of the three companies, which all more than doubled in February 2017 and reached record highs between March and April, have since plunged from their highs. When Beibadao sold Zhangjiagang’s shares, the stock dropped by daily limit of 10% for several days, causing huge losses to follower investors.

Lin Qingfeng, head of Beibadao, refused to cooperate with investigators, and Beibadao’s accounting personnel resorted to physical altercations and attempts to destroy evidence, the regulator said.

A CSRC investigator said many alleged stock manipulators are influential businesspersons or have special connections, and confrontations often occur during investigations. He called for establishing specific rules and penalties on those who refuse to cooperate with investigators.

The move comes amid tougher market oversight and more severe punishment for illegal trading in recent years, especially after the stock market meltdown in 2015, which wiped out trillions of yuan.

Last year, China sentenced a former billionaire hedge fund manager to five and a half years in prison for stock-price manipulation, in one of the country’s most high-profile cases following the 2015 market rout.

Xu Xiang, founder of Shanghai-based asset management firm Zexi Investment and sometimes referred to as “China’s Carl Icahn,” was fined 11 billion yuan for tinkering with share prices. It is the highest-ever fine for an individual committing a financial crime in China.