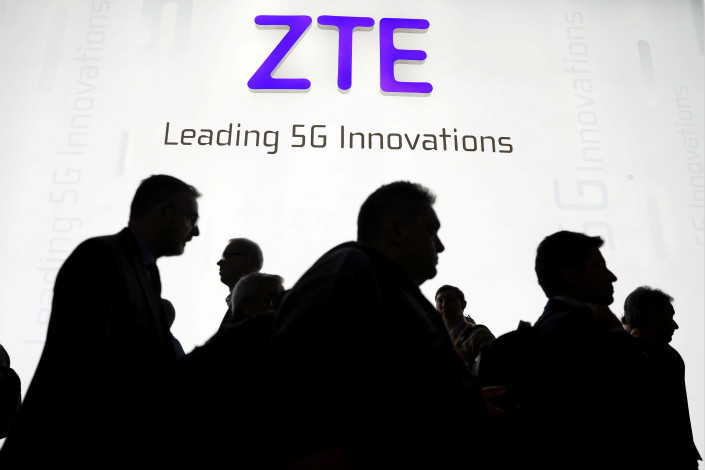 Visitors pass in front of ZTE’s booth at the Mobile World Congress in Barcelona, Spain, on Feb. 26. Photo: VCG

Telecoms equipment maker ZTE Corp. on Tuesday said it is assessing the implications of a ban that prohibits it from buying components from its U.S. suppliers for seven years as punishment for selling its products to Iranian and North Korean firms.

It issued the statement as its Hong Kong-listed shares were suspended the same day “pending the release of an inside information announcement in respect of the activation of denial order by the Bureau of Industry and Security of the United States Department of Commerce,” the company said in a separate statement to the Hong Kong stock exchange. The company’s Shenzhen-listed shares were also suspended.

“At present, the company is assessing the full range of potential implications that this event has on the company and is communicating with relevant parties proactively in order to respond accordingly,” the company said in a statement to Caixin.

ZTE in 2016 was banned from buying U.S.-made components used its core telecom equipment and smartphones after a Washington probe determined the company sold products to Iran and North Korea in violation of U.S. sanctions. Washington had suspended the seven-year ban last year after the two sides reached a settlement, but then ended that suspension on Monday after determining ZTE had violated the agreement.

China’s Ministry of Commerce said it was watching the case to ensure ZTE’s fair treatment, but also called on Chinese companies in general to be mindful of the local environment when going overseas.

“In the process of doing business abroad, China has always requested that Chinese companies respect the laws of their host countries, and to act legally and according to the rules,” the ministry said in a statement on its website (link in Chinese). “We hope that the U.S. will appropriately handle the situation in accordance with relevant rules and regulations and will act in a legal and policy environment that is fair, just and stable.”

Following the U.S. announcement, research house Jefferies lowered its 2018 and 2019 revenue estimates for the company by 13.5% and 7.6%, respectively, saying the U.S. action would “likely cause ZTE to miss shipments and lose orders on handsets and transmission.” It also downgraded its earnings forecasts for the company by 51% in 2018 and 28% in 2019, and downgraded the stock to “underperform.”

But Jefferies added the company could still negotiate a settlement to the latest violations uncovered by Washington, which involved ZTE’s failure to discipline employees involved with the original illegal sales to Iran and North Korea.

Updates previous story with comments from the Ministry of Commerce