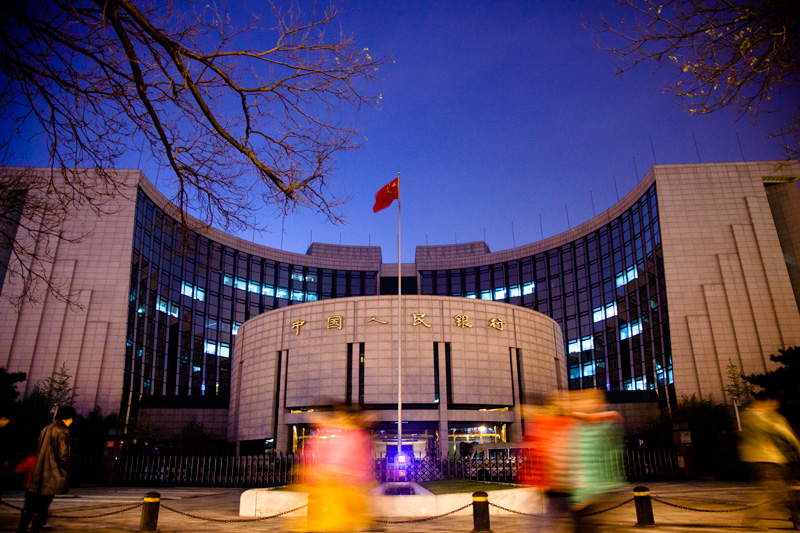 The People’s Bank of China (above) said financial institutions should use the cash freed up from the lower reserve requirement ratio to support small and micro companies. Photo: VCG

China’s central bank said on Tuesday that it will cut the amount of cash that most banks are required to hold as reserves — a move to release cash into the banking system.

The People’s Bank of China (PBOC) said it will lower the reserve requirement ratio (RRR) by 1 percentage point for banks whose current RRRs are 15% or 17%, affecting most commercial and foreign banks. Rural credit cooperatives with a lower RRR are not on the list.

This is the first reserve cut announced by the central bank under its new leadership team. “It indicates a changing approach of cash injection,” said Lu Zhengwei, chief economist of Industrial Bank.

The one-point cut, which will be made on April 25, will release about 1.3 trillion yuan ($207 billion) of additional liquidity into the banking system.

But banks are required to use the freed-up liquidity to pay back loans obtained from the central bank via the medium-term lending facility, which will total 900 billion yuan on that day based on first-quarter data.

After the repayment, a net injection of 400 billion yuan will be left for Chinese banks, according to the PBOC.

The central bank said financial institutions should use the additional cash to support small and micro companies, adding that this will be included as a requirement in its macro-prudential assessment for banks.

Chen Ji, a financial analyst at the Bank of Communications, said the operation reflects a new approach of the central bank to combine RRR cuts with liquidity tools to adjust market liquidity in a more sophisticated way.

The latest RRR cut followed a smaller-scale reserve cut in January, when the central bank reduced the RRR between 0.5 percentage point to 1.5 percentage points for banks that met certain requirements for lending to small business and the agricultural sector. The cut freed up between 300 billion yuan and 380 billion yuan of capital into the banking system at that time.

The move has fueled speculation that the regulator may ease broader controls on commercial banks’ deposit rates to further liberalize the financial sector.

Lu said banks are likely to see a rising debt ratio after easing the cap for deposit rates. “Banks will face mounting pressure if the reserve requirement is not reduced,” Lu said.

The central bank has been very cautious about RRR cuts over the past two years due to concerns that any such move would send a strong easing signal. Instead, the bank has relied more on open market operations and lending facilities to adjust market liquidity.

Macquarie Capital said in a report Tuesday that the RRR cut is also meant to help reduce banks’ liquidity pressures during the process to bring back the off-balance sheet businesses to the balance sheet as part of the country’s deleveraging campaign.

Analysts believe the RRR cut will offer a boost to China’s stock and bond market.

Meanwhile, simmering trade tensions with the U.S. is also casting a shadow on the country’s economic outlook.

The central bank said that it will continue a prudent and neutral monetary policy. China will maintain relatively high reserve requirement ratios for banks to fend off financial risks, the PBOC said.