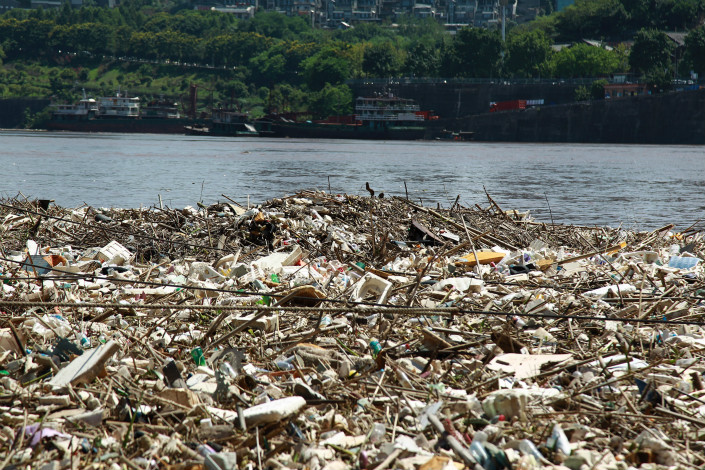 A flotilla of trash floats down the Yangtze River near the western municipality of Chongqing on Aug. 26. Photo: VCG

When a “spectacularly long” belt of household garbage appeared along a section of the Yangzte River in eastern Jiangsu province in late 2016, local residents knew someone was doing something illegal.

They alerted the maritime safety administration of Taicang, a port city in the Yangtze River Delta about 56 kilometers (35 miles) northwest of Shanghai, which launched an investigation. On Dec. 18, 2016, they caught workers on board a small freight vessel dumping waste into the river and from there tracked down who they believed was one of the perpetrators — Zhu Daocheng.

Zhu was well known locally as a waste disposal entrepreneur and, according to his lawyer, went by the nickname Jiang Hai Dian Chang (River Ocean Power Plant), a phrase that refers to the practice of dumping trash directly into a river.

Details of the alleged illegal dumping scheme and the investigation that led to the arrest of the accused were revealed in a two-day trial at the Haining People’s Court, which ended on Wednesday. Thirteen defendants stood accused of crimes related to polluting the environment and their involvement in illegally dumping 9,700 tons of garbage into the Yangtze River in November and December 2016. They could face up to seven years in prison if they are found guilty.

The description of the belt of garbage that ended up in the Yangtze River was contained in an official investigation into the dumping, one of many high-profile pollution cases involving China’s longest river. In 2013, Shanghai hit the headlines after thousands of dead pigs were found floating along the Huangpu River, a tributary of the Yangtze, after they had been dumped miles upstream by farmers in neighboring Zhejiang province.

Tongxiang Chuangjie Sanitation Equipment Co. had turned to Zhu for help in disposing of garbage under a contract it had won with the government of Haining, a city in neighboring Zhejiang province, which was struggling to deal with growing volumes of household waste.

The company had promised to transport the waste to an incineration plant near Taicang, some 142 kilometers away for 263 yuan ($41.87) per ton. But fierce opposition from local villagers concerned about pollution had delayed the opening of the facility run by Tongxiang’s partner.

In despair, Tongxiang Chuangjie turned to Zhu, who had built a reputation for illicit dumping and waste disposal. He put the company in touch with Cheng Yumin, a Jiangsu businessmen who operated a garbage sorting firm and had connections with three incineration facilities, one in Jiangsu under the name of Jiangsu Shengyuan and two more in Anhui province. Tongxiang Chuangjie agreed to pay the men 200 yuan per ton to get rid of the waste.

But Cheng told the court his company was expanding rapidly at the time and didn’t have the capacity to deal with the garbage. He admitted agreeing to help with the dumping but denied playing any role in the actual disposal of the trash or taking any money from Tongxiang Chuangjie.

He accused Zhu of trying to set him up, while Zhu told the court he only provided an acquaintance, Sha Zhiguo, with boats and had no idea where the waste ended up.

Sha, who admitted dumping the garbage into the Yangtze River, told the court that he had discussed his plan to dump the waste into the waterway with Zhu and several of his employees backed his claim in court.

Shen Hua, an executive at Tongxiang Chuangjie, told the court he was horrified when he discovered the illicit dumping plan, which he said was masterminded by Zhu. But Shen said he did not try to stop Zhu because it would be Zhu and Cheng who would be held responsible if the scheme was discovered.

The court said it will return a verdict at a later, unspecified date.