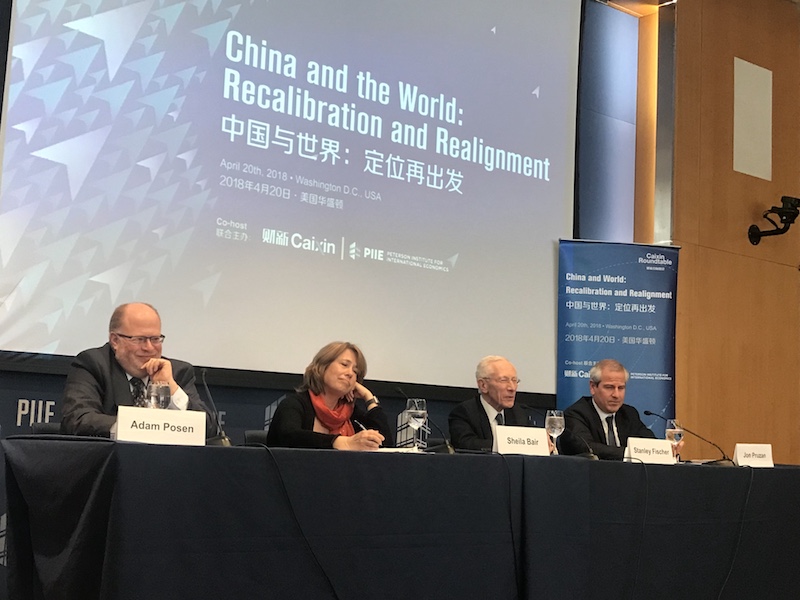 A panel of former U.S. bank regulators and bank executive praised steps China has taken to open up its financial market as well as tighten regulations to curb financial risks.

“We should take a look at what they are doing,” said Sheila Bair, former chairwoman of the Federal Deposit Insurance Corp. (FDIC), at a conference Friday hosted jointly in Washington by Caixin Media and U.S. think tank Peterson Institute for International Economics. She participated in a panel discussion that also involved former Federal Reserve Vice Chairman Stanley Fischer and Morgan Stanley Chief Financial Officer Jonathan Pruzan.

Bair is best known for her early warnings about the subprime mortgage crisis. After leaving the FDIC when her five-year term expired in 2011, she wrote a book about the financial crisis, Bull by the Horns: Fighting to Save Main Street from Wall Street and Wall Street from Itself. In the panel discussion on Friday, she said she is concerned that the U.S. is deregulating its biggest banks after they recovered from the financial crisis, while China’s regulators are tightening controls.

Bair said she was “struck” when she read President Xi Jinping’s comments to China’s congress last year, particularly his acknowledgement that there was “too much credit” in China.

“They have problems in their banking sector,” but China has started to deal with the problems through regulatory moves, including combining its banking and insurance regulators, Bair said. “The merger is a further sign of a sincere commitment to tighten regulations in the financial sector.”

Bair is particularly concerned by the Fed’s recent proposal to reduce the amount of capital that the biggest U.S. biggest banks are required to hold, she said.

“We are doing this with very low unemployment, record high profits by banks and no signs of credit shortage,” Bair said. She suggested that U.S. policy makers should learn from their Chinese counterparts by “taking a long view, instead of short view” in good times.

With a potential trade war brewing between China and the U.S., Bair suggested that the world’s two biggest economies should “sit down and work it out because trade wars do not help anyone. Fischer, the former Fed vice chairman, praised China for acting “more like an adult” in the recent trade dispute.

Fischer also stressed the importance of international cooperation and coordination in terms of regulatory systems. He pointed out that China took part in this dialogue in the “most responsible” way.

Bair suggested that financial technology could be an area for cooperation between the two countries because there are issues they both face.

Bair acknowledged that China is clearly ahead of the U.S. in use of technology to provide financial services, and China also leads the U.S. in regulating this fledging sector.

But Pruzan called for China to take further steps to provide a level playing field and an open market to let international financial companies to operate in the country. To do so, he said, China should also provide better protection of intellectual property.

Click here for more coverage of the Caixin's "China and the World" roundtable.