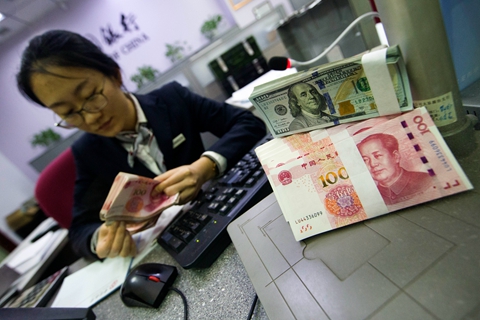 Until 2014, QDII was the only legal avenue for domestic individual investors to gain access to overseas capital market. Photo: VCG

The State Administration of Foreign Exchange (SAFE) said Wednesday in a brief statement that it will launch studies on QDII program participants and their business operations. The administration will work with other government agencies to push forward QDII reforms and improve macro-prudential management of the program to better meet investors’ demands and reflect market development.

Sources close to the matter told Caixin that the reform will seek to work out specific arrangements that fit different institutions based on their business type, asset size and internal operations in order to improve the transparency of the quota system.

Issuance of new quotas, which has been suspended for 36 months, will also be resumed, sources said. SAFE said in the statement that it will update information about QDII quota every month.

The QDII program was created in 2006 allowing financial institutions that meet certain qualifications to invest in overseas securities and bonds. It was the only avenue for domestic individual investors to legally gain access to offshore capital markets under the country's capital controls, until 2014 when the Shanghai-Hong Kong stock connect program was launched.

Data from SAFE show that a total of $90 billion in QDII quotas was granted to 132 qualified institutions from 2006 through March 2015. Since then, no new quotas have been handed out, part of regulators' efforts to stem rising capital outflows.

At a 2016 news conference, SAFE’s capital account management director, Guo Song, said the administration was coordinating with other agencies to seek expanding the quota.

Under the suspension of new quota approval, existing QDII quotas have become valuable assets. Although there are restrictions on quota sale or transfer, many holders have found ways to skirt the rules and let other institutional investors use their quotas in return for a hefty fee, triggering a crackdown by the regulator.

Fan Yue, vice president of E Fund Management Co., said domestic investors’ appetite of overseas assets has been growing quickly since last year, fueling demands of QDII quotas. “It will be a very good news for domestic investor seeking to diversify their portfolios, if new quotas can be issued,” said Fan.

Funds with investments through QDII outperformed most other investment products in 2017. Data from Windinfo showed that the average annual return of QDII funds was 16.2%. But amid frequent market fluctuation this year, the return rate has declined dramatically in the first quarter.

BoCom Schroder’s Xie said banks, insurance companies and large state-owned enterprises are highly interested in getting QDII quotas as they eagerly seek to diversify assets with overseas investments. “China’s economy has changed a lot over the past three years and investors are getting more rational, driving China to increasingly integrate with the global financial market,” said Xie.

China’s central banker governor, Yi Gang, pledged at the Boao Forum for Asia Annual Conference on Wedensday that China will push forward capital account liberalization. China will put some of its promised policies to further open up its financial sector as early as June, with more liberalization measures to follow by the end of the year, Yi said.