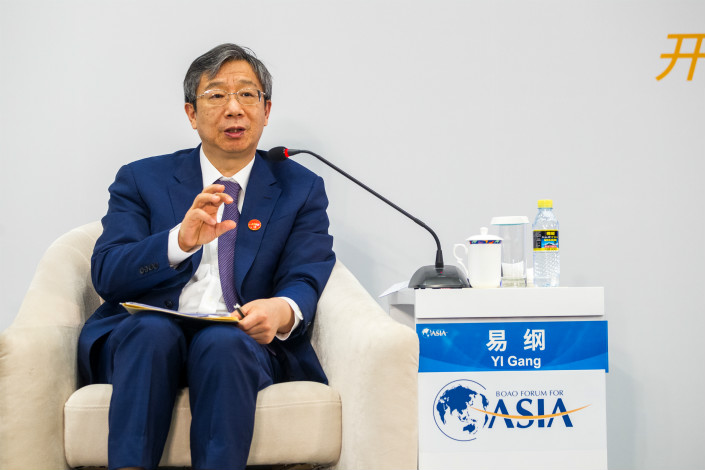 China will start implementing its promised policies to further open up its financial sector to foreign investors by the end of June, with more liberalization measures to follow by the end of the year, People’s Bank of China Governor Yi Gang said Wednesday.

The government will remove limits on foreign ownership of banks and asset management firms, he said during a session (link in Chinese) at the Boao Forum for Asia Annual Conference, an economic event held in the country’s southern province of Hainan. Foreign banks will also be allowed to simultaneously set up branches and locally incorporated subsidiaries in the country, he said.

In 2006, the banking regulator allowed foreign banks to convert their branches into locally incorporated subsidiaries, which meant they could provide the same services to their customers as Chinese lenders, including issuing debit cards and offering yuan-denominated services to individual customers. Currently, foreign banks can have either branches or locally incorporated subsidiaries in China, according to a report by a new media outlet linked to the official Securities Times newspaper.

The central bank governor said the reform is one of six upcoming financial reform policies, adding that implementation on most of these policies is expected to start by June 30.

Most of the steps were first announced on Nov. 10 at the end of U.S. President Donald Trump’s state visit to Beijing, in a major reform package that has been seen as a move to address long-standing complaints by foreign companies about limits placed on their access to the country’s sprawling financial market and control over their joint ventures. An announcement on the time frame for the actual implementation of those pledges has been eagerly awaited by investors.

“We will treat foreign companies in the same way as domestic firms,” Yi said. “The market will be open. The performance of companies will depend on their corporate governance and competitiveness.”

When asked whether the government would be willing to see foreign banks acquire Chinese lenders, Yi said, “We are actually leaving open this possibility once we lift the equity ownership cap.”

HSBC, which claims to be the largest foreign bank in China, welcomed Yi’s announcement on Wednesday. The locally incorporated HSBC Bank (China) Co. Ltd. started operations in April 2007 and currently has more than 170 outlets in over 50 cities across the country.

“These positive moves underline China’s commitment to financial reform, promoting international use of the Renminbi and liberalising its capital account,” Peter Wong, HSBC chief executive for the Asia Pacific region, said in a statement.

It is the first time China has provided a clear timeline on its financial market opening-up plans since the 19th Party Congress in October, ANZ Research analysts Betty Wang and David Qu said in a note.

It showed “China is serious about its commitment to opening up the economy and carrying out reforms in the financial markets,” they wrote. “This may also help boost China’s further integration into global financial markets, including the possibility of Chinese bonds being included in global bond indices.”

The other policies set to be carried out this year include raising the cap on foreign investors’ shareholding in securities firms, fund management companies, futures companies and life insurance firms to 51% from 49% today. The limit will be entirely abolished three years after the increase comes into force.

The country will drop the requirement that securities joint ventures must have at least one local securities company as a shareholder. It will also allow “qualified” foreign investors to establish insurance agencies, and the business scope of foreign insurance brokerages will be widened to match their domestic competitors, Yi said.

The quotas for stock connects between the mainland bourses and the Hong Kong exchange will be quadrupled from the beginning of next month, he added. The quota for the net purchase of Shanghai stocks by overseas investors via the arrangement will be increased to 52 billion yuan ($8.3 billion) and to 42 billion yuan for investment the other way round. The same rise will apply to the Shenzhen-Hong Kong Stock Connect.

The government also aims to launch the stock connect between Shanghai and London, which has been discussed since mid-2015, within this year, Yi said.

Yi also said more measures, besides the aforementioned six policies, will be launched before the end of December, including moves to encourage foreign investment in financial leasing, auto financing and currency brokerage firms as well as into consumer loan providers, and removing restrictions on securities joint ventures to ensure a level playing field.

The announcement came a day after President Xi Jinping at the same forum promised that China will lower tariffs on car imports, implement harsher punishment for intellectual property rights violators and accelerate the pace of financial opening-up. Xi’s speech was seen by analysts as an olive branch to Trump to ease bilateral trade tensions.

Trump on Tuesday said in a tweet that he was “very thankful” for Xi’s promises and that he was looking forward to making “great progress together” with his Chinese counterpart.

In his remarks at the Boao forum, Yi also sought to soothe fears that Beijing might devalue its currency to help pile on pressure for concessions in trade negotiations with Washington.

“China will not let its currency depreciate while lowering tariffs,” he said. “The central bank will not intervene in foreign exchange rates in the long term.”