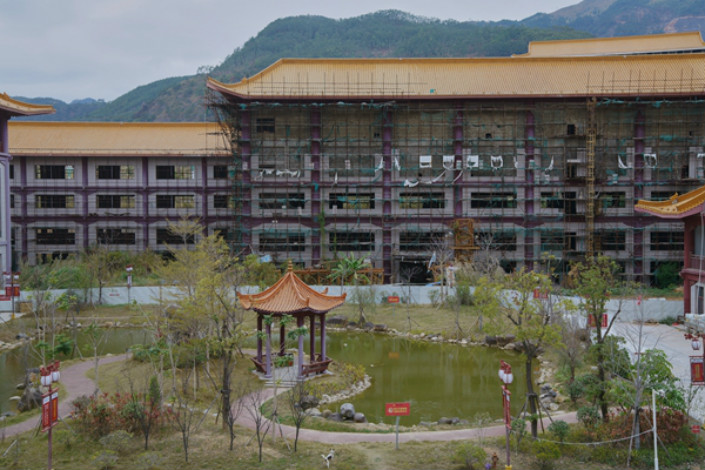 The China Classic Industrial and Art Exhibition City is seen in Xianyou county’s Bangtou town. Construction of the 57-acre site began in August 2011. Now the project, with a budget of 2.1 billion yuan ($334 million), is still incomplete because the developers are rumored to have fled overseas after heavy losses from the project. Photo: Caixin/Liang Yingfei

For a century, Xianyou, a small county in the southeastern province of Fujian, has been a mecca for people in love with art and furniture made from redwood.

The rich and powerful flocked into the county in the city of Putian each year to roam the streets in search of sculptures and pieces of furniture carved out of top-grade redwood.

The classification “redwood,” a general term for a wide range of rare woods, includes Pterocarpus santalinus, commonly known as red sandalwood; Pterocarpus macrocarpus, or the Burma padauk; and Dalbergia cochinchinensis, or Thailand rosewood.

Xian Zuo also refers to redwood sculptures and furniture made in Xianyou, which have a reputation for being classy and using carefully selected raw materials.

But the once-bustling town has lost its shine since 2014, when its bubble — fueled by market speculation over rising prices of redwood — burst amid concerns of a government crackdown on the industry.

Yu Mao, who owns a redwood plant in Xianyou, told Caixin that he was a public servant when he met a Taiwan rare-timber dealer who asked him to help find a large piece of a camphor tree, a rare hardwood desired in furniture manufacturing.

He was later given 20,000 yuan (now worth $3,180) for his work, over 400 times the amount a fresh graduate could earn a month back then. That encounter introduced him to the highly lucrative market of rare timber products, Yu said.

He first entered the rare-timber market as an entrepreneur shortly he left his government post in the ’90s and made his first million yuan in a few years. Yu set up his own redwood furniture plant in 2000, and some of his sets fetched up to 3 million yuan apiece.

The county reported 4,500 redwood businesses, including self-employed entrepreneurs, at the end of 2014, and there were also 3,000 related businesses in the higher and lower parts of the industrial chain, according to the county government.

The kind of timber used is crucial to the quality and popularity of carved redwood furniture. Timber from only 33 tree species — including red sandalwood — can be marketed as redwood, according to China’s national standards.

Demand for rare timber was so great that many dealers looked beyond the Chinese border for more supplies, according to Yu. Some of them have to go as far as the central Zambian miombo woodlands in south-central Africa, he said.

Imports of redwood timbers into China, often via the black market, grew more than twelvefold from 2000 to 2014, according to the Washington, D.C.-based organization Forest Trend.

In 2013 alone, the price of imported redwood soared by nearly 40%, and the prices of some highly sought-after woods more than doubled and even tripled within the year.

But half of the species that qualify as redwood in China, such as red sandalwood, are protected under the Convention on International Trade in Endangered Species and listed as endangered species by the International Union for Conservation of Nature. That has led to rising pressure from the international community for Chinese authorities to clamp down on the trade.

The Burma paduak will vanish within 13 years if China keeps up its pace of imports, according to an estimate by the London-based Environmental Investigation Agency.

A sea change in demand for redwood collectibles began around 2014, when fewer dealers were spotted in Xianyou county and a growing number of businesses stopped importing rare wood timbers over concerns about a looming official crackdown, according to several shop owners in Xianyou.

The party’s campaign against official extravagance and corruption launched by President Xi Jinping late in 2012 also played a role in pricking the bubble, according to several redwood-business owners.

Many small redwood business-owners who have gone broke are now making a living by driving cabs or setting up small roadside stalls selling breakfast.