By Han Wei and Li Qing 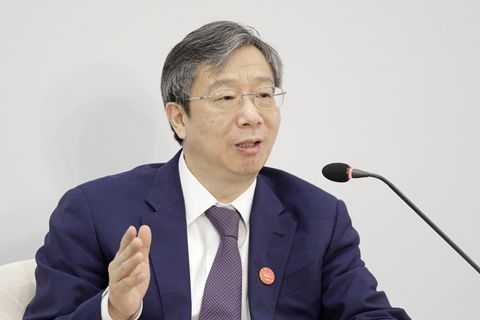 China should continue pursuing its basic strategy of financial market reforms and opening up despite the present trade spat with the U.S., China’s central bank governor Yi Gang said Friday at a conference in Washington.

U.S. and China hurled threats of imposing tariffs on a combined $200 billion of goods in recent weeks. If fully implemented, the proposed punitive tariffs from the two sides would affect more than 30% of annual bilateral trade, with tremendous ripple effects on the global market.

“Further escalation of trade tensions between China and the U.S., with tit-for-tat retaliatory threats, will spin out of control,” said Yi, who in March became China’s first new central bank governor in 15 years.

China and the U.S. have exchanged tariff treats after U.S President Donald Trump proposed to slap punitive tariffs on more than 1,300 Chinese products, sparking fears of a damaging trade war. The tensions have slightly eased recently after Chinese President Xi Jinping in early April addressed some of the U.S. concerns by reaffirming China’s commitments to opening up the economy and better protecting intellectual property rights.

The U.S.-China trade imbalance should be analyzed from a multilateral perspective, Yi said. It represents the U.S. trade deficit with Asia, which is decided by the global production chain. The U.S. trade deficit is also a macro problem involving issues of America’s budget deficit, investment flows and private savings.

For China, the best strategy is to manage its own economy well and continue its financial market reforms and opening up, Yi said.

At the Boao Forum for Asia Annual Conference earlier this month, the central bank governor pledged policies to further open China’s financial sector to foreign investors this year. Measures include removing limits on foreign ownership of banks and asset management firms as well as gradual elimination of the cap on foreign investors’ shareholding in securities firms, fund management companies, futures companies and life insurance firms. Some of the new policies will go into effect by the end of June.

China will create a level playing field for financial institutions regardless of ownership, Yi said Friday. He reaffirmed that the country will continue opening its financial industry and other service industries.

The PBOC governor said he sees his mission as continuing to reduce financial risks. High on his agenda is lowering the overall leverage ratio. China’s debt-to-GDP ratio stood at 249% by the end of last year, with an annual increase of 2 percentage points. Yi said this indicates a stabilizing of the leverage ratio’s growth. The average annual increase in the ratio was 13 percentage points over the last five years.

“I hope this year it will continue to stabilize,” Yi said.

The central bank will also fight against risks related to loosely-regulated financial holding companies and illegal activities in the internet finance sector. The bank will prevent systemic risks within the current legal framework, addressing issues including bankruptcy, equity and bond holders’ responsibility and well-defined property rights, the governor said.

The structure of the Chinese economy has continued improving. The country’s capital flow is basically even, and the value of the yuan has remained basically stable, Yi said.

In the three years from 2014 to 2016, the yuan faced depreciation pressures, sparking the POBC to defend the currency from devaluation, according to Yi.

But the currency bounced back last year. In the past 12 months, the yuan’s exchange rate against the U.S. dollar appreciated 10% and rose a further 4% during the first quarter this year, Yi said.

International analysts have expressed concerns that China may devalue the yuan to address the trade tensions with the U.S., but Yi told media in early April that China’s monetary policies reflect the country’s economic performance and focus on serving the domestic economy.

At the Friday conference, Yi said “China’s currency has been decided by the market supply and demand. The central bank hasn’t intervened the value of the yuan for a long time.”