By Jason Tan and Luo Guoping 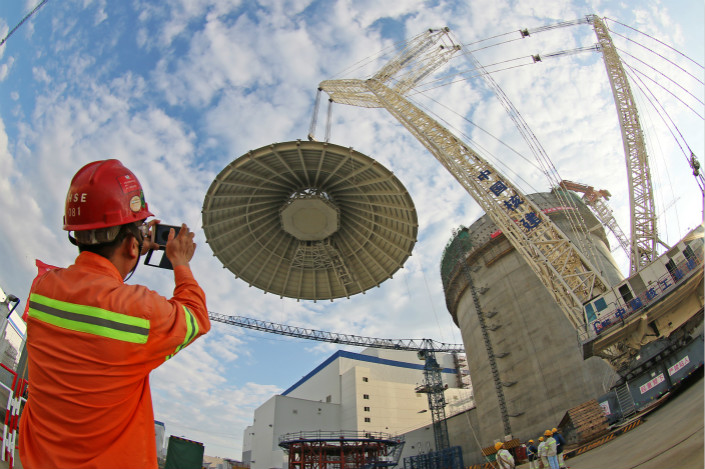 A worker takes pictures of construction at the Haiyang Nuclear Power Plant in Haiyang, Shandong province, in September 2015. Photo: IC

*Five new nuclear reactions will go online in China this year, but the country will need to bring six to eight online annually if it is to meet its 2020 target

*While 20 reactors are currently under construction, achieving this pace will be ‘quite difficult,’ a non-governmental organization said

(Beijing) — China has to build nuclear reactors faster if it is to meet its ambitious target of having 58 gigawatts (GW) of nuclear power capacity by 2020, an industry report said.

The country will have to bring six to eight new reactors online every year if it is to complete its goal, which will be “quite difficult to achieve,” said a report by the China Nuclear Energy Association, a non-governmental organization, on Monday.

Under the country’s 13th Five-Year Plan, announced in 2016, China aims to have 58 GW of nuclear-generating capacity in operation by 2020. The goal was set to reduce the country’s dependence on coal, which currently generates over 70% of the electricity and is a major cause of air pollution.

With Germany, Switzerland, Japan and the U.S. all scaling back their nuclear power sectors in the wake of Japan’s 2011 Fukushima Daiichi nuclear disaster, China could emerge in the next decade as the most significant developer of nuclear-fired power if it accelerates its building schedule, according to Reuters.

China had 37 nuclear reactors in operation at the end of 2017 with a total output of 35.8 GW, supplying almost 4 percent of the country’s total energy, the report said.

Another 20 new reactors were being built as of the end of 2017, which are expected to contribute another 22.9 GW when they go online, the nuclear association said.

“It takes over five years to build a nuclear station,” so authorities should make plans to cope with the 2020 target and also post-2020 development, the association said.

While racing to develop its own nuclear power sector, China is exporting its nuclear know-how overseas.

Work on a domestically developed third-generation reactor, the Hualong-1, jointly developed by China National Nuclear Corp. and China General Nuclear Power Group, is progressing in the southeastern city of Fuqing, where operations are expected to begin in the first half of 2020, reports said.

China is also building an identical Hualong-1 unit in Pakistan and is discussing building one in Argentina, Thailand, Britain and the Czech Republic.