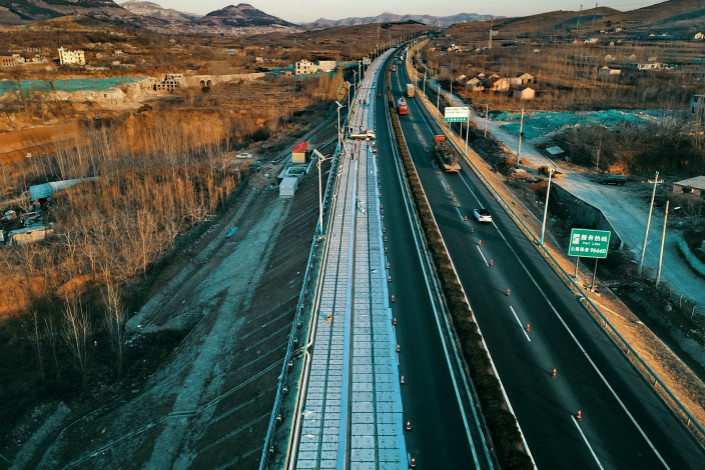 The world’s first photovoltaic expressway is under construction in Ji’nan,Shandong province, on December 12. Photo: IC

“Risks for some LGFVs to default on their bonds are rising in 2018 as financing conditions have continued to turn tight,” said Terry Gao, Fitch Ratings’ senior director of international public finance, during the company’s China Credit Conference on Tuesday.

However, a systemic crisis is “rather unlikely” as the overall risk is still under control.

Defaults by even just a few LGFVs could trigger a repricing of the market, which may cause a short-term liquidity crisis at some companies, and some firms’ ability to refinance their maturing debt could be undermined, he warned.

LGFVs are special-purpose vehicles set up to raise money for local infrastructure projects such as roads, bridges and city rails.

Chinese leaders have listed containing major risks, especially financial risks, as one of their top three priorities over the next three years. The Ministry of Finance in a notice issued late last month reiterated that state-owned financial institutions must obey a ban on providing financing to local governments in any form other than buying their bonds.

Days before that, the ministry told local governments to step up the monitoring and prevention of debt risks in their jurisdictions, identify high-risk areas and report them to special local government leading groups in charge of debt.

Looking ahead, Gao said, it is unlikely that local governments would bail out potential defaults by LGFVs with their fiscal income. But the authorities could arrange short-term liquidity support by financial institutions for the companies to stop the risks from spreading.