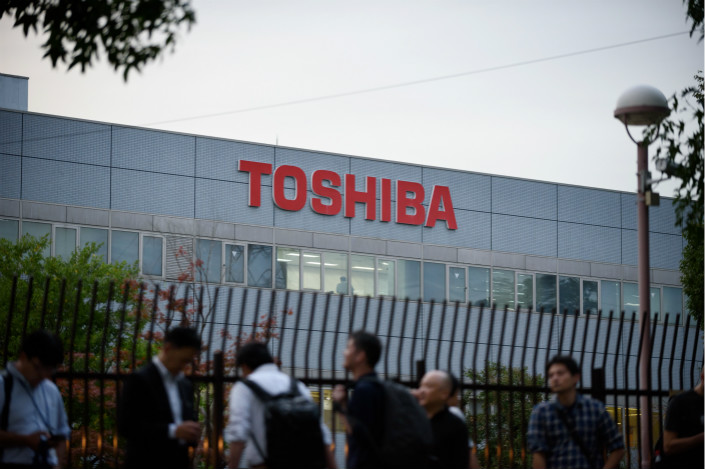 Toshiba has said it still aims to complete the sale of its memory chip business soon, following reports that it had decided it would cancel the transaction if it fails to get approval from China’s anti-monopoly regulator by Tuesday.

Observers have accused Chinese regulators of intentionally dragging their feet on approving two of the largest chip deals now in the works as trade tensions with the U.S. remain high.

China has a say in these deals because its manufacturers buy chips from Toshiba and Qualcomm, arousing monopoly concerns in the country, which is racing to develop its own chip industry to cut reliance on foreign manufacturers.

Toshiba “is all but guaranteed to miss a May 1 deadline” to sell its memory chip business due to Chinese delays, Bloomberg reported, saying Chinese authorities are now conducting a third review due for completion by May 28.

In a statement Monday, Toshiba addressed media speculation that it has considered canceling the sale of Toshiba Memory Corp. if Chinese watchdogs reject the deal, or that it would consider revising the deal if approval has not come by the end of May.

The company said it “still intends to close the memory business transaction as soon as possible, and has not decided any concrete policy for the alternative, including termination of the transaction under certain circumstances.”

Media reports have claimed China is delaying giving approval to these multibillion-dollar deals in a tit-for-tat move after Washington threatened to slap tariffs on Chinese goods worth $50 billion.

China is “slowing reviews” of these takeover deals as trade tensions escalate, the Wall Street Journal reported on April 13.

“At this juncture, it’s quite natural for people to complain that China is purposely delaying antitrust approval for both transactions,” said Tao Jingzhou, managing partner of law firm Dechert LLP in Beijing.

Announced in October 2016, the proposed Qualcomm-NXP deal has been approved by regulators in eight of nine jurisdictions, with the latest green lights from the EU and South Korea in January. China’s clearance is critical as the deal must be completed by July 25. If it isn’t closed by then, Qualcomm has to pay NXP a termination compensation of $2 billion.