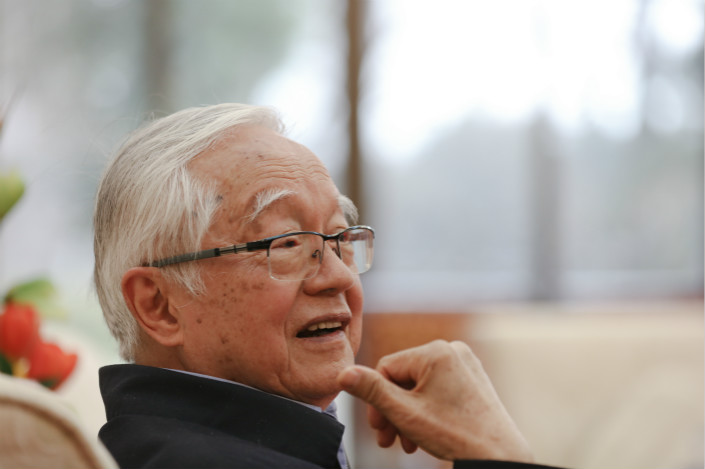 In 2013, well-known Chinese economist Wu Jinglian wrote the following letter to Miao Wei, the minister of Industry and Information Technology, in which he described the challenges that lay ahead for the country’s chip manufacturers. The letter has been translated and edited for length.

After closely reading the recent official report on promoting the leapfrogging development of China’s semiconductor chip industry, I would like to offer the following opinions and suggestions based on my experience investigating high-tech industries in recent years.

The report measures the gap between the Chinese semiconductor industry’s achievements in recent years and advanced standards elsewhere in the world and analyzes the constraints on further development of the chip industry. The report argues that if two major difficulties — the need for massive amounts of money and the difficulty of forming technical teams — are not solved, China’s chip industry will have difficulty achieving leapfrog development. I believe that these estimates and conclusions are pragmatic and realistic.

Based on the analysis described above, the document proposes “demand-led, innovation-driven, breakthrough-focused, and unrestrained development” as guiding principles. It calls for “thoroughly developing the foundational function of market-driven resource allocation, strengthening government guidance, increasing enterprises’ sustainable development abilities, and achieving the leapfrog development of the semiconductor chip industry.” Dealing with the relationship between market-driven resource allocation and stronger government guidance is a matter of extreme importance.

As everyone knows, a major flaw in China’s current economic system is that the government is managing many things it shouldn’t be managing or isn’t able to manage well. This has prevented the development of market-driven resource allocation. This is a fundamental problem obstructing China’s progress in innovation and efficiency. As we formulate many policies intended to help the chip industry achieve leapfrog development, we must clarify the systematic obstacles against technological innovation by enterprises and the market’s development of its fundamental resource allocation function. We must then take effective action to remove these obstacles.

In response to the industry’s demands, the document emphasizes and discusses how the government can fulfill the chip industry’s need for massive amounts of capital. It mentions setting up a 200 billion yuan ($31.59 billion) investment fund for China’s semiconductor chip industry through the leadership of central government funds, mobilizing local governments, orders from state-owned enterprises and funding from private enterprises. This fund will be entrusted to a specialist management organization and will invest in key semiconductor chip enterprises through common stock and convertible bonds.

China’s recent experience in developing emerging industries shows that investment and financing methods must be conducive to helping to strengthen the hard constraints on corporate budgets. Many local governments used government-affiliated organizations to arrange matters, with government leaders deciding for themselves which companies should receive investment. Even though this method of investment had an immediate effect, it was unable to encourage businesses to keep costs down and increase efficiency. It frequently caused corruption and waste, breeding dependency in companies and diminishing other companies’ enthusiasm.

In order to increase investment efficiency, even if the government persists in controlling funds and resources, there should still be an independent organization conducting the work of commercialization. For example, when companies are supported by venture capital and private equity, investors and fund managers are usually required to form limited partnerships run by managers with unlimited liability. But the local-government-created venture capital and private equity funds in China are largely too close to the government, so they invest based on the preferences or even direct instructions of government officials. The probability of successful incubating and expanding companies is low. This must change.

The recent report proposes setting up a national institute to carry out research on generic integrated circuit and software technologies, which can be widely adopted across industries.

When it comes to basic research and the development of generic technology, the government should indeed shoulder greater responsibility.

Small and midsize enterprises (SMEs) are often unable to undertake research tasks in this area without financial support from the government or other organizations due to the long research and development cycle and uncertain prospects. This kind of research is usually conducted by universities and other institutions. These institutions must be reformed, and the ills of bureaucracy must be eliminated to form a truly scientific community, independently conducting and evaluating research.

In contrast, however, technology development should mainly be conducted by businesses. However, SMEs have limited financial resources. For some common technologies, they may need to organize joint research and development institutions. Taiwan has achieved very good results through the nonprofit institute of industrial technology that it established in 1973. Japan’s VLSI Research Consortium, which is 40% funded by the government in conjunction with five large semiconductor companies, has also achieved success. There have been many other such cases in other countries.

I recommend that the Ministry of Industry and Information Technology commission a specialized agency to conduct research and help relevant companies exchange information.

The official document also says that in order to strengthen the training and introduction of talent, China should further increase its support for the introduction of leading chip industry talent through extraordinary policies.

In my view, enterprises are the main drivers of technological innovation, as well as for attracting talent. The party and government agencies can play only a supporting role. People have different opinions when it comes to the central and local governments’ existing plans to introduce talent. China must improve the way it attracts and motivates talent, through in-depth analysis and debate, in order for talented people to truly fulfill their potential and commitment to the development of China’s chip industry.

Read more about the sanctions against ZTE.