Lenovo Plunges After Hang Seng Decides to Give It the Boot 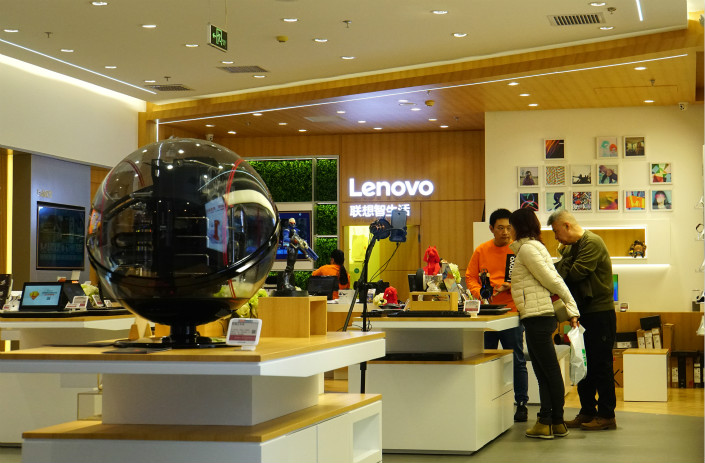 * Lenovo’s stock falls 3.23% on first day after announcement that it will be removed from Hang Seng Index

(Beijing) — Shares of Lenovo Group Ltd. dropped to their lowest price since October 2009 on Monday after it was announced that on June 4, the world’s second-largest PC-maker would again be dropped from Hong Kong’s benchmark Hang Seng Index.

The stock price plunged 3.23% to close at HK$3.6 (46 U.S. cents) on the first full day of trading since it was revealed Friday that Lenovo would be removed from the Hang Sang for the second time. It first joined in 2000, but was then dropped in 2006. The company was then reinstated in March 2013.

In a statement to Caixin, Lenovo, which trails only HP Inc. in worldwide share of the PC market, said the move will not have any substantial impact on its share price in the long term.

“We respect the outcome but we pay more attention to the company’s ongoing efforts in transformation and the returns for stakeholders over the long term,” the statement said.

While Hang Seng Indexes did not give a reason for Lenovo’s removal, Bloomberg reported that the value of Lenovo’s shares has dropped 56% since it was returned to the index in 2013, and that other companies removed from the index had suffered a median drop in value of 48% before being booted.

In its latest earnings report, Lenovo posted a $289 million loss for the quarter ending Dec. 31, citing a one-time write-off of $400 million of deferred income tax assets in the U.S.

“On paper, Lenovo has ticked many of the hardware checkboxes from PCs to phones to servers. But a combination of integration and competitive challenges are keeping them from replicating the success that they had in PCs,” said an IDC researcher.

Steven Tseng, an analyst with Daiwa Capital Markets based in Taipei, noted the server business could be Lenovo’s silver lining.

“Over the past two years, Lenovo built up a steady customer portfolio in the U.S. enterprise sector,” he said, adding its server business isn’t as scrutinized as its Chinese peers such as Huawei Technologies Co. Ltd., which is said to have links to the ruling Communist Party and the Chinese military.

Tseng said Lenovo is more likely to see a turnaround for its server business in the near term rather than its smartphones, which still face integration hiccups amid a very competitive market landscape.

Lenovo purchased Motorola Mobility for over $2.9 billion from Google Inc. in 2014, its biggest-ever corporate acquisition. Some 1,000 employees were laid off in 2016 as part of an initiative to merge Motorola and Lenovo’s smartphone operations.

Lenovo CEO Yang Yuanqing proclaimed in April that the company aims this year to “return to the PC top spot without compromising profitability.”

Lenovo lost out to HP by a slight margin in the global PC market last year, ending its four-year reign as the top seller.

Zhao Zuoyan contributed to the report.