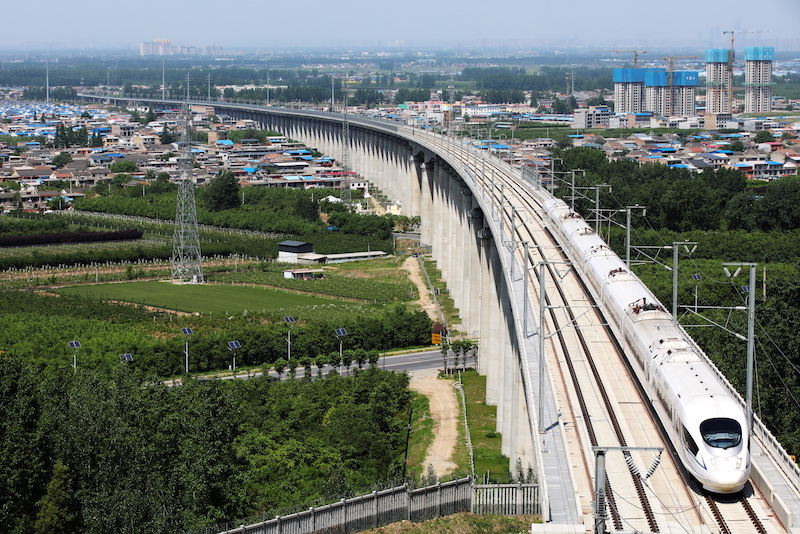 China’s top economic planning agency has set out guidelines for local governments that are building high-speed railway lines and stations after finding a range of problems such as poor locations miles away from city centers and ambitious edifices far too large for their respective purposes.

China is spending 3.5 trillion yuan ($549.5 billion) in its 13th Five-Year Plan (2016-20) to expand the country’s rail system, with most of the money earmarked for high-speed trains, as the government has promised to link all major cities with populations of more than 500,000 to the network.

The investment and the economic activity that high-speed rail has brought to big cities has led to a fight among smaller ones to win the right to build a station along routes that pass nearby.

But competition between cities has often led provincial-level governments to make compromises on routes, which has resulted in stations being built miles away from downtown areas. In Henan province, for example, a feud between Dengzhou and Xinye resulted in the high-speed rail station being built 16 kilometers (10 miles) from Dengzhou and 14 kilometers from Xinye.

A railway expert who declined to be named told Caixin that local governments often locate stations far away from urban centers because land prices are lower in outlying areas, and the governments hope that their respective new facilities will boost the local economy, attract new businesses and encourage real-estate developers to build homes. Local governments can also find themselves in conflict with the railway builder and operator who wants the line and the station to be as close as possible to the city center.

The National Development and Reform Commission (NDRC), China’s top planning agency, which released the guidelines with two other ministries and China Railway Corp., the state-owned rail operator, warned that smaller cities should not “overestimate the contribution a high-speed rail project can make to economic prospects” and just blindly copy the development plans of bigger cities. Smaller populations and poor locations mean that such plans are unsuitable and unable to sustain a similar level of growth.

The guidelines specify that land around the station earmarked for development should not on average exceed 50 hectares (123.6 acres), although for a small number of stations, that figure go to up to 100 hectares.

The NDRC said that new high-speed railway lines should not lead to the partitioning of cities; that stations should be located within, or as near as possible to, central urban areas for the convenience of passengers; and that the buildings should not be ostentatious, grandiose projects.

Local governments need to take on a lot of debt to build the station and the surrounding infrastructure, including paying for land acquisition, before they can recoup any money from selling land-use rights to property developers and commercial businesses, and from fiscal income once the areas are built and populated.

The NDRC’s guidance warned local authorities to be aware of the social and economic risks relating to high-speed rail developments, such as low appeal to businesses and residents, and required them to ensure that the debts taken on to fund such projects do not lead to higher financial risks.