Didi Under Fire After Carpool Killing

By Li Rongde and Sun Wenjing 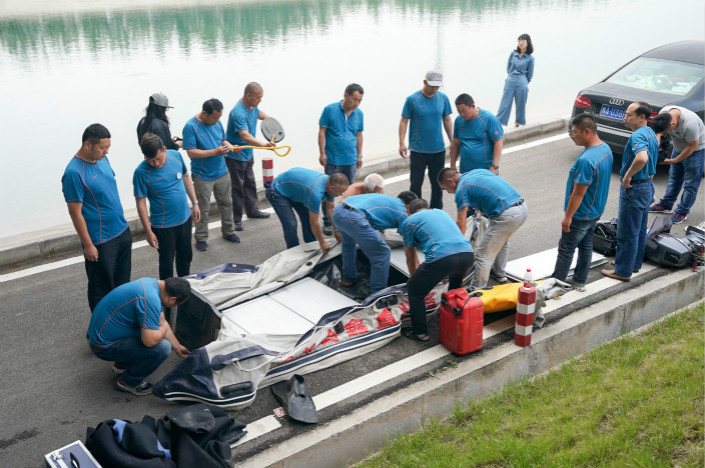 Police recovered a body from a Zhengzhou canal on May 12, later confirming it was the corpse of the man suspected of killing a flight attendant after picking her up through Didi Chuxing's Didi Hitch carpooling service. Photo: IC

China’s ride-sharing leader Didi Chuxing is under intense public scrutiny over the safety of its car-pooling service after a driver allegedly killed a woman during one of the rides last week.

Didi has since suspended its operation of Didi Hitch, which pairs passengers with drivers who are traveling in the same direction.

Li Mingzhu, a flight attendant, was allegedly killed by Liu Zhenghua in a ride she hailed via Didi Hitch in the city of Zhengzhou late on May 5, according to police. Her body was found on May 8 in a suburban area in Zhengzhou, Henan province, by local police who responded to a missing-persons report filed by her father.

A manhunt for the alleged killer led police to discover a male body Saturday in a local river that matched DNA samples collected from the crime scene.

Li’s father said that he wished Liu could have been caught alive to face justice, he told state broadcast China Central Television. Now that the suspect has died, Li's family aims to hold Didi responsible for their daughter’s death, Li’s father said.

The family’s decision came after Didi admitted that the facial recognition procedure it uses to verify drivers’ identities at night had malfunctioned. Liu, who is not a registered driver, used his father’s account. The system failed to flag the false identity, and thus failed to send an alert to Didi, according to a statement released by the company.

Before Li’s death, Didi had received complaints from other riders about Liu’s allegedly inappropriate language, but the company did not follow up with additional measures after it called the driver five times and failed to reach him, according to the statement.

Didi announced it would halt its Didi Hitch service for a week from Saturday to undergo necessary review and upgrades to fix the loopholes.

Didi Hitch has gained popularity in China because it is cheaper than traditional car-hailing.

Didi Hitch drivers are not required to follow rules as stringent as those for car-hailing services, such as proof of residence and employment contracts, according to Zhao Zhanling, a research fellow with China University of Political Science and the Law’s Center for IPR Studies.

In such cases, a company would not be usually liable for physical harm inflicted on riders, Zhao said.

“They would be held to account in accordance with the civil code if they are found to fail to properly screen driver’s information, including their ID and criminal background checks,” Zhao said.

Li hailed the Didi Hitch ride at a hotel near the city’s airport near midnight on May 5, to go downtown to catch an early-morning train to Jinan in the eastern province of Shandong for a friend’s wedding the following day.

During the ride, Li sent text messages to friends, referring to the driver as “a pervert” who had flattered her about her beauty and said he wanted to kiss her, according to local media reports.

On Thursday, days before the body thought be Liu’s had been found in the river, Didi apologized for Li’s murder, acknowledging it “let users down by breaching their trust and cannot skirt responsibility for the slaying.”

The company issued another statement later in the day offering a 1 million yuan ($158,000) reward for information leading to the whereabouts of the alleged killer as well as Liu’s photograph, birthplace, identification number and cellphone number.

Didi did not say why it was looking for the man, but the unusual move was met with criticism of infringement of privacy, as police released far less information when they named the man as a suspect. In an article on Friday, Huxiu.com, a Beijing-based business information service provider, blasted Didi for breach of privacy.

Li’s father is also reported to have dismissed the reward as a PR stunt because the company had not offered the family any condolences.

Didi’s post offering a reward has since been taken down.