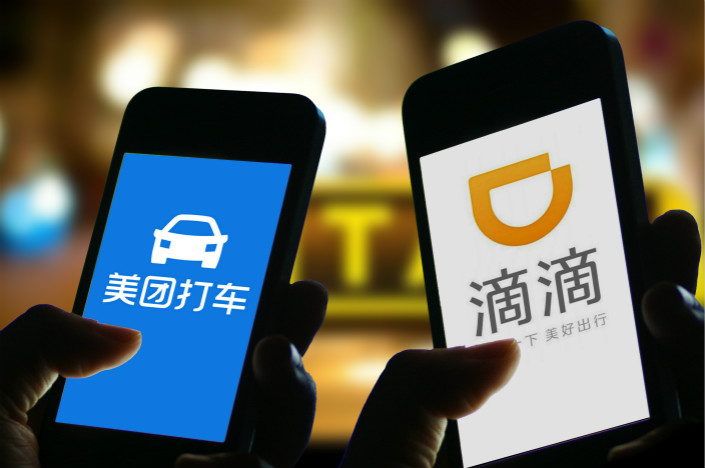 After winning a costly battle with Uber, Didi is coming under pressure again from new competitors. Photo: VCG

*Several competitors have emerged to challenge Didi, including Meituan Dianping, which claims to have a third of the ride-hailing market in Shanghai

After a cutthroat price war with dozens of other domestic players and a merger with Uber’s China business in August 2016, Didi Chuxing Technology Co. was crowned China’s undisputed ride-hailing leader.

But the company’s monopoly — currently 90% of the market share — now looks increasingly uncertain as a slew of other competitors ramp up efforts to get into this business.

Investors and industry experts said the ride-hailing market still has low barriers to entry, where Didi has yet to work out a stable business model and those willing to burn cash can launch an attack.

But given an increasingly tightening environment, even a second price war would be widely expected to be much smaller than the first.

After a one-week rollout that waived its drivers’ commission fees, Meituan declared that it had acquired a third of the city’s market share with 300,000 daily transactions on its platform.

Meituan’s foray into car-hailing has been praised by investors, who said the company — which has already offered online services that include food delivery, ticket-booking and restaurant-reviewing — is on its way to complete its goal of becoming a “mega-platform for everything.”

“Many of Meituan’s users are very likely to hail a car before heading to a restaurant and ordering a meal according to reviews on the company’s platform,” said Xu Xin of Capital Today, who has invested in the Chinese ride-hailing sector.

Already, in Nanjing, where Meituan rolled out a trial project early last year, the company has handed out massive subsidies to both drivers and consumers. Meituan charged drivers in the city an 8% commission fee, compared with Didi’s 22%.

Joining Meituan in the ride-hailing field is a long list of old and new contenders.

Yidao Yongche, which secured new funding from Taoyun Capital in July following a cash crisis, has made a comeback since early this year and is set to expand services in more than 40 Chinese cities, where it said drivers’ commission fees will be as low as 5%. Meanwhile, Dida Pinche, which previously focused on car-pooling, said it will expand into the service with a push to subsidize both drivers and consumers. Similarly, state-owned Shouqi Yueche also plans to widen its core business as a high-end chauffeur platform.

Even internet companies like travel platform Ctrip.com International Ltd. are jumping on the bandwagon, with Ctrip saying it has obtained an online ride-hailing license from the transport authority in Tianjin in April. Ctrip’s move came after AutoNavi Holdings Ltd., an Alibaba Group Holding Ltd. mapping affiliate, debuted its carpooling business at the end of March.

Didi, which claims to serve 450 million people with its 21 million drivers, has responded with quid pro quo tactics in a bid to fend off contenders.

Caixin learned that Didi has quietly launched a subsidy program in seven Chinese cities, including Shanghai and Beijing, which allows selected drivers to purchase a new membership card that qualifies them to receive a higher monthly pay.

Apart from keeping those drivers who use their own cars, Didi also aims at expanding its own vehicle fleet by partnering with car-rental operators. In Month, the company said it plans to raise 10 billion yuan ($1.55 billion) through an asset-backed security project for new-vehicle procurement in order to “expand the transportation capacity of Didi’s platform.”

In addition, Didi has surprised market-watchers by entering the unfamiliar business of food delivery — a move that is directly aimed at Meituan. Early this month, Didi officially launched the takeout service in Wuxi, Jiangsu province, and plans to enter other major Chinese cities soon.

Already, the company has built up a global network through investments and partnerships with ride-hailing businesses that operate on five continents.

In January, Didi acquired Brazilian peer 99 in a deal believed to be worth $600 million. Previously, Didi took stakes in Singapore-based Grab, India’s Ola, Dubai-based Careem, and Estonia’s Taxify. In the U.S., Didi invested $100 million in Lyft, Uber’s main rival in the American market.

“Being too busy fending off competitors at home would mean its international business would be affected, at least in the short term,” said Ding Daoshi, an industry expert and columnist.

However, even as the talk of a “price war” makes the rounds in China’s ride-hailing sector these days, market-watchers don’t expect that it could be the same as it was years ago.

Since July 2016, China has begun to issue permits to car-hailing platforms, when it rolled out rules to “legalize” the sector, which mandated the use of locally registered cars and local drivers.

For example, even on the first day of its rollout in Shanghai, Meituan was summoned by the city’s regulator, which demanded the company obey rules for ride-hailing platforms and not “disturb the market with a price war.”

“With the government now more likely to intervene, all the new and old players, including Meituan are actually ‘dancing with shackles on,’” one industry executive who declined to be named told Caixin.