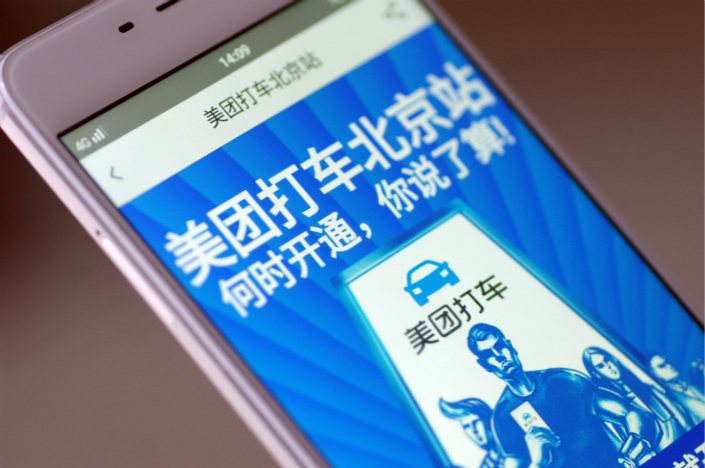 Industry analysts said that Meituan-Dianping’s move into car-hailing could stir up the already mature sector, in which Didi Chuxing Technology Co. Ltd. has become the undisputed leader. Photo: IC

Chinese online services firm Meituan-Dianping will launch a car-hailing service in Beijing this week — a move that could potentially ignite a subsidy war akin to the one that roiled the industry years ago.

The company has been conducting trial car-hailing services in Nanjing since early last year, and will launch its service in the Chinese capital on Friday, multiple media outlets reported.

Meituan said it had reached over 200,000 preregistered users for the new service — a threshold it set for a launch in Beijing. Last month, the company said it plans to eventually roll out the service in a total of seven cities, including Beijing, Shanghai and Hangzhou.

Industry analysts said that Meituan’s move into car-hailing could stir up the already mature sector, in which Didi Chuxing Technology Co. Ltd. has become the undisputed leader after merging with the China business of Uber Technologies Inc. in August 2016.

In its latest fundraising in October, Meituan pocketed $4 billion, giving the company a total valuation of $30 billion. It has now “begun to take serious steps in the car-hailing business, which will force Didi to adopt measures like offering subsidies to users and drivers to secure its market place,” said industry expert Ding Daoshi.

“Offering lower prices is a must for Meituan to gather more users,” Ding said, adding that the company can take advantage of the large user bases in its existing apps, which could be diverted into the company’s new car-hailing platform.

Multiple media reports suggested that the move had raised the suspicions of Beijing’s transportation regulator, who summoned Meituan representatives “for a conversation” on Tuesday. A company spokesperson confirmed to Caixin that Meituan is now applying for a government permit.

Regulatory hurdles could pose challenges for Meituan’s ambitions in the area. Major Chinese cities began placing restrictions on car-sharing services in late 2016, including requiring the use of local drivers and locally registered cars.

The rules effectively banned more than 9 out of 10 of Didi’s 610,000 drivers in Beijing and Shanghai, two of China’s busiest cities.

However, Ding says the restrictions could be relaxed in 2018.

“The 2016 rule obviously hurt the sector, as we all noticed that hailing a car in first-tier cities has become increasingly difficult,” Ding said. “Regulations will definitely have to be relaxed to meet the strong market demand.”