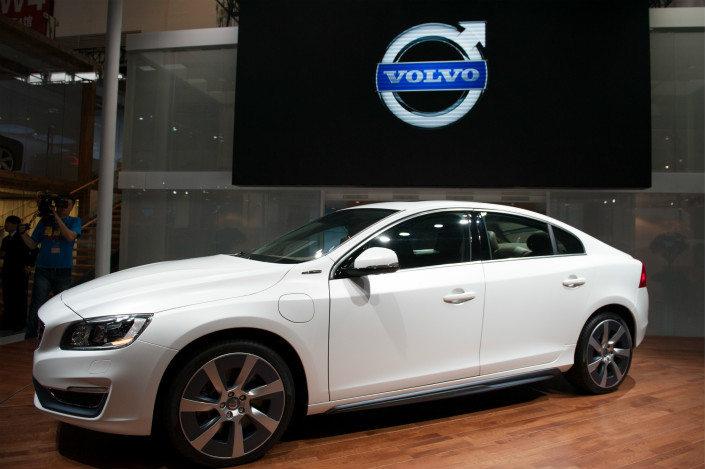 A Volvo S60 sedan sits on display at an auto show in Beijing in April 2014. Photo: VCG

Volvo Cars’ owner, Zhejiang Geely Holding Group Co. Ltd., told Caixin that it is “looking at the possibilities” of seeking an initial public offering (IPO) for the Swedish carmaker in both Hong Kong and Sweden.

“We haven’t made a final decision on how to proceed as of yet,” the Chinese automaker said.

The statement came after Bloomberg reported that Geely has picked Citigroup Inc., Goldman Sachs Group Inc. and Morgan Stanley as advisers for a mooted $16 billion to $30 billion flotation of Volvo.

If the IPO happens, Geely could enjoy a ninefold reward from its $1.8 billion purchase of Volvo from Ford Motor Co. eight years ago.

The information, which surfaced on Friday, sent shares of Hong Kong-listed Geely up by 3.7% that day, with the price continuing to edge up on Monday.

Volvo reported its car sales worldwide increased 13.6% to 200,000 in the first four months of the year. The U.S. was its fastest-growing market, up by 38%, and China the single largest market, accounting for one-fifth of global sales volume.

Geely, which first marketed itself as the maker of the cheapest cars available, has been trying to transition into higher-end automobile manufacturing based on a “capital for technology” strategy. Besides Volvo, it also snapped up other firms such as Australian automatic transmission supplier Drivetrain Systems International Pty. Ltd. and London black cab manufacturer Manganese Bronze Holdings PLC.

In order to tap into the higher-end market, Geely and Volvo set up a new brand, Lynk & Co. in 2016. The Chinese company said in March that it would use a Volvo factory in Ghent, Belgium, to make some Lynk models.