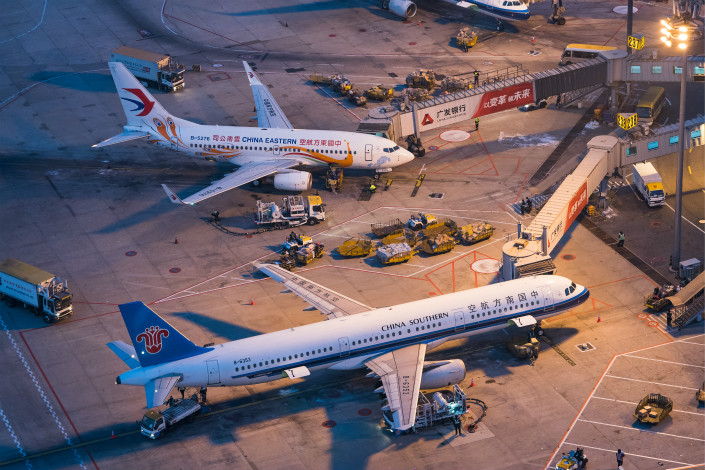 A China Eastern and a China Southern airplane are parked on the runway at Beijing Capital International Airport on Feb. 6. Photo: VCG

China is lifting restrictions that currently limit the number of Chinese airlines allowed to operate the same international long-haul routes, opening the door wider for competition in its run-up to become a global aviation hub.

From Oct. 1, the Civil Aviation Administration of China (CAAC) will allow two airlines — instead of one — to serve the same international routes, the regulator said on its website (link in Chinese) on Monday.

A long-haul route is one that requires flying more than 4,500 kilometers (2,800 miles) in a single journey.

With the new policy, China Eastern Airlines Corp. Ltd. and China Southern Airlines Co. Ltd, which operate mainly in their respective home cities of Shanghai and Guangzhou, will be in a better position to compete with Air China Ltd. which dominates many of Beijing’s outbound international routes.

The change would also mean that smaller local carriers will be allowed to join the state-run big guys in bidding for profitable routes such as those between China and the U.S., Australia and the U.K. For example, the Beijing-Los Angeles route, which has been controlled by Air China for years, will now be up for a second operator.

The new rule also scraps restrictions for the shorter international routes with distances of fewer than 4,500 kilometers. These journeys will not be limited to the two-airline cap.

The move also coincides with the planned opening of a second airport in the capital next year. Carriers have been fighting for a slice of Beijing’s rapidly growing commercial flight market.

According to a construction plan approved by the State Council in July 2016, the new airport — located in the capital’s southern suburb of Daxing — will be designated as the hub for members of the SkyTeam alliance, a global group of airlines that includes China Eastern and China Southern.

Meanwhile, facilities at the current Beijing Capital International Airport will be left mainly to Air China and its fellow airlines in the Star Alliance, such as Air Canada, Lufthansa and United Airlines.