Teacher Who Left Students Behind in Sichuan Earthquake Looks Back

By Xu Weichao and Li Rongde 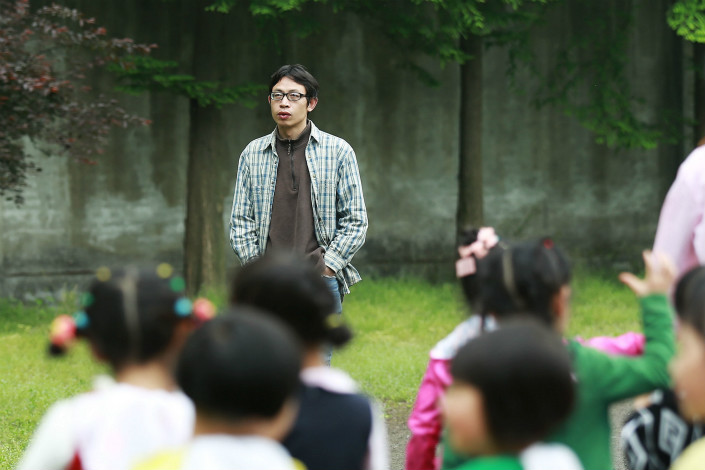 Fan Meizhong teaches at a school in Chengdu in April 2014. Photo: VCG

Ten years after becoming infamous for abandoning his students during the catastrophic Sichuan earthquake, Fan Meizhong maintains that the Chinese public’s anger has been misdirected all this time.

In 2008, netizens were outraged when the Chinese-language teacher confessed to fleeing to safety, almost on all fours, leaving behind a packed classroom of students after the deadly quake struck. He was demonized in an online song and became known nationwide as “Runner Fan.”

A decade later, Fan, now a 46-year-old stay-at-home father, maintains that he did nothing wrong by taking care of himself first. He refuses to apologize, as many have called for, dismissing the whole saga as absurd.

People should have been asking why some schools saw hundreds of fatalities while others emerged from the quake virtually unscathed, Fan argues.

The magnitude-8 quake that split open the earth in Sichuan on May 12, 2008, killed more than 69,000 people, including thousands of students. Nearly 18,000 remain unaccounted for.

“But I do think it was a milestone event that helped China transform from a nation obsessed with collectivism via martyrdom and moral teaching to a modern society that embraces individualism built on rule of law,” he said.

Fan, too, said he was transformed. Until the event and the uproar, he had considered himself lonely, miserable, “an angry madman.” But he came to realize he is fraught with his own weaknesses, like everyone, he told Caixin ahead of the 10th anniversary of the disaster.

Fan, who wears a thick pair of glasses, said he became angry at the media coverage, which was full of praise for so-called “moral models.” There was grave shortage of questioning how human errors may have contributed to the disproportionately high death toll among schoolchildren.

He took his frustration to the internet days after the quake, posting a first-person account of how he managed to be the first in his school to escape to the soccer field unharmed, leaving behind his students. The article’s aim was to counter the “heroic rhetoric” that was dominating the national conversation, he said.

“I’m not brave enough to sacrifice myself for others,” he wrote at the time. “I care only about my own life. I can only imagine sacrificing myself for my baby daughter. I wouldn’t think about it for anyone else, not even my mother.”

His candid selfishness set off an online firestorm. In an article published weeks later, Wang Chunmei, the party secretary of Peking University’s Department of History, where Fan had studied, said she was ashamed of having had a student like Fan.

No students from Fan’s school died in the quake, and Fan said he wouldn’t have written the article if any had. But at Juyuan Middle School, just six miles away, nearly 300 students and teachers were killed, according to official statistics.

Fan claims, therefore, that what a teacher did under such circumstances wouldn’t have made much difference, and students at his school survived largely because the buildings withstood the tremors — not because of teacher heroics.

This made him realize his own vulnerabilities — fear of death and an instinct to protect himself before others — making him no different from the vast majority under extreme circumstances such as deadly quakes, he argues.

Fan said people should hold themselves to certain moral standards, but that such requirements should take into account human nature — and in the case of the earthquake, the quality of the infrastructure and people’s preparedness.

“To better protect students at the time of an earthquake, what really matters is school infrastructure, built to the highest standards, and regular safety training, not a teacher’s sacrifice for students,” he said.