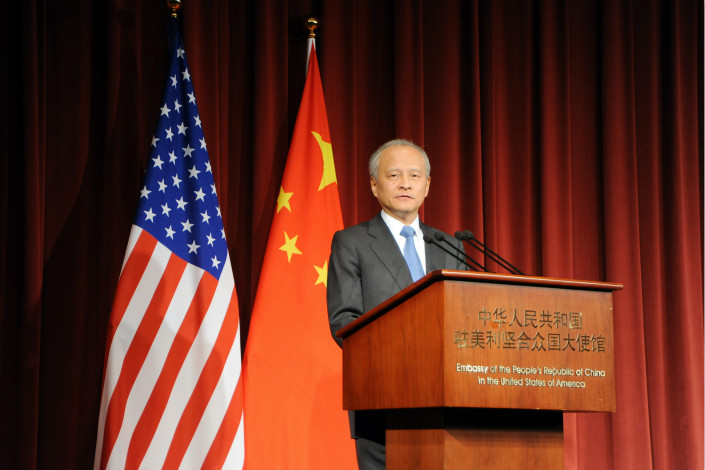 *While Ambassador Cui Tiankai said a solution to trade tension could be found if a ‘balanced approach’ is taken, his counterpart in Beijing said the nations are ‘still very far apart’

China’s top diplomat in the U.S. has called for a balanced approach to resolving bilateral trade disputes that addresses the concerns of both Beijing and Washington.

Speaking ahead of another round of negotiations in Washington this week to defuse a looming tariff war, Cui Tiankai, China’s ambassador to the U.S., said: “I’m quite confident if we could have a balanced approach to each other’s concerns, we will be able to find a solution.

“Maybe we can’t solve all the problems right now. But we will address the short-term problems and also look at the long-term, more-structural problems,” Cui said at an event held on Friday, U.S. time, by the Center for Strategic & International Studies, an American defense and national security think tank.

Cui spoke days before Chinese and U.S. officials were due to restart their trade talks after negotiations earlier this month in Beijing made little progress. Liu He, a vice premier and top economic adviser to President Xi Jinping, is heading the Chinese delegation, which will spend five days in Washington to continue the negotiations, China's Ministry of Foreign Affairs said on Monday.

Terry Branstad, Cui’s U.S. counterpart in Beijing, was less optimistic about the talks, saying at a conference in Tokyo on Tuesday that the two countries were “still very far apart” on resolving trade friction, according to a Reuters report.

One of the key sticking points between the two sides is the ‘Made in China 2025’ strategy, a blueprint announced in 2015 by Premier Li Keqiang that aims to build the country into a global leader in advanced technology and turning it into a “powerful” manufacturer rather than a “big” one. The plan focuses on boosting several high-tech industries including pharmaceuticals, robotics, green energy and technology, and high-end equipment manufacturing. Its targets include boosting the home-made content of goods produced on the mainland and reducing dependence on foreign technology.

U.S. President Donald Trump’s administration sees the program as a threat to America’s current dominance of advanced technology. The tariffs it has threatened to impose on up to $150 billion of Chinese goods over alleged unfair trade practices, such as theft of intellectual property rights of American companies, target in particular products that benefit from Made in China 2025.

Cui defended the strategy as a “natural and even legitimate” goal for his country to move up the global value chain. He stressed that the program is “an open plan” that will benefit domestic and foreign firms operating in China alike, rather than excluding U.S. companies.

Many American businesses have complained that Chinese companies get too much government support, giving them an unfair advantage, Cui said. But Chinese firms may believe that the competition is “not quite fair from the very beginning” due to the advantages their U.S. rivals have gained through long years of development, such as a global production distribution network and the backing of the dollar as an international reserve currency, he said.

“Personally, I believe whether we have a level playing field very much depends on where you stand,” he said.

Implementing Made in China 2025 is a key part of the government’s strategy to develop the country into a manufacturing powerhouse, according to Chapter 22 of the current national Five-Year Plan, which runs through 2020, and many Chinese academics, analysts and officials have said that the strategy is nonnegotiable.

Wang Shouwen, a vice minister of commerce, said in April that similar plans had been rolled out in the past by many countries, including the U.S., and that the strategy was formulated in line with the rules of the World Trade Organization. Targets associated with the strategy were “predictive and instructive” and not mandatory, he said.

American organizations such as the U.S.-China Business Council, an industry group, and the U.S.-China Economic and Security Review Commission, an advisory body of the U.S. Congress, have both voiced concerns over ambitious international market share targets contained in a document that forms part of the strategy.

However, Xin Guobin, a vice minister at the Ministry of Industry and Information Technology, said in January that the document — “Made in China 2025 Key Technology Road Map” — was just a research report for policymakers’ reference, not a mandatory government document.

Chinese analysts have also downplayed complaints about the financial support domestic companies get from Made in China 2025 through various industrial investment funds set up by provincial and local authorities. They argue that rather than handing out subsidies directly to enterprises, the government is acting as an investor that expects returns and may ultimately divest its interests.

Made in China 2025 intends to “provide government guidance (on industrial investment) based on market rules, which is not rare in foreign countries,” Huang Huiqun, director of the Institute of Industrial Economics of the Chinese Academy of Social Sciences, said previously.