Can Hainan Live Up to the Hype? 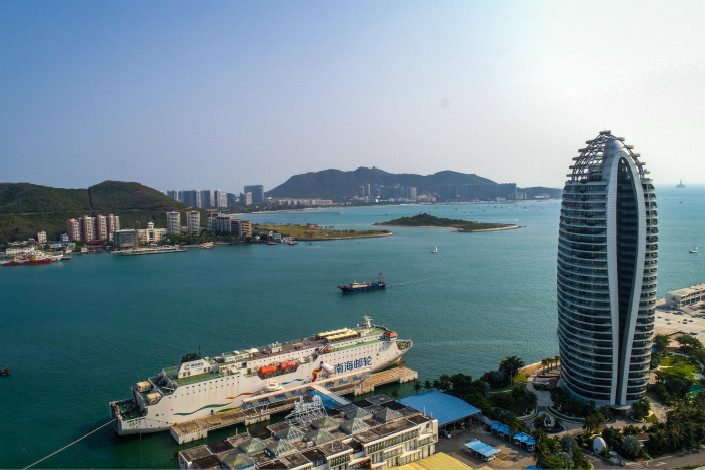 The central government sees grand potential in China’s southernmost province of Hainan, designated as the new frontier for the country’s economic reforms.

Plans are afoot for the island to act as a free trade zone and free trade port, to be home to sports lotteries and horse racing, to lead the country in eco-friendly development, and to have an economy driven by the service industry.

The question is: Can Hainan possibly meet these lofty goals?

The task ahead appears to be a challenging one, as the province’s potential for development seems restricted by many factors, such as its low urbanization rate, weak public services, small pool of talented workers, and an economy dominated by real estate.

The central government said in an April document that it will set up an investment fund to support the construction of a free trade zone by 2020. According to the State Council document, the free trade port will build on the progress made by the zone, and be mature by 2035.

The document was released one day after President Xi Jinping announced the free trade projects in a speech delivered in the province on April 13 to commemorate the 30th anniversary of the official founding of the province and the Hainan Special Economic Zone (SEZ).

Some experts have referred to this level of top-down support as Hainan’s “third once-in-a-lifetime chance,” following Hainan being made an SEZ in 1988 and when the central government said the island would be turned into a tourism-led economy in 2009.

China’s newest SEZ, Hainan has seen development less dramatic than its neighboring SEZs of Shenzhen and Zhuhai. Even high-level support for its tourism sector hasn’t helped it close the economic gap with its peers, with the province’s gross domestic product (GDP) amounting to only 446.2 billion yuan ($70.1 billion) last year, beating out only underdeveloped western regions such as Tibet, Qinghai and Ningxia and lagging far behind Shenzhen’s 2.24 trillion yuan GDP in 2017.

Although the central government document has paved the way for the region’s next phase of development, the province will have to work hard to both improve its weaknesses and reduce its dependence on the property market, which has been a key sector for many years and squeezed out other industries.

Hainan, a once-underdeveloped island that became a real estate hot spot, is a testament to the power of the real estate sector in China, which in part underpinned the growth of the Chinese economy over the past three decades.

Starting from 1988, the average house price shot up by more than five times to 7,500 yuan per square meter (700 yuan per square foot) until the property bubble finally burst in 1993, according to data from Hainan province and a real estate prices annual book.


In 2009, the island’s property market was given another chance at rapid growth when the central government rolled out its tourism blueprint for the island, raising its profile to become one of the most well-known tourist attractions in China.

Besides luring sun-seekers with its tropical climate and resort-lined coast, Hainan has also marketed itself as a place that can host international events, from the Boao Forum for Asia Annual Conference to the Miss World beauty pageant.

As a result, Hainan’s real estate market started to draw in more buyers looking for a place in the sun — many of them seasonal refugees from northern China’s cold and smoggy winters. In the first half of 2017, 88% of homebuyers were from outside the province, according to a report from real estate services company Lianjia. The report said most of the buyers came from Beijing, Tianjin, Hebei province and China’s rust-belt northeast.

In 2017, investment in real estate accounted for nearly 50% of the total 412.5 billion yuan fixed-asset investment in Hainan that year, the highest proportion of any Chinese region. The real estate sector contributed 46% to Hainan’s GDP last year.

The dominance of real estate has led to an excessive focus on the sector, to the point that provincial Communist Party boss Liu Cigui said at the country’s legislative sessions in March that Hainan must not become a “manufacturing hub for properties,” and he stressed the importance of industrial diversification.

Hainan Governor Shen Xiaoming wrote in a recent article in the official People’s Daily that the province is determined to reduce its reliance on real estate, saying it will aim to pivot toward oceanic and aerospace technologies.

However, it was the prospect of gambling, rather than aerospace technologies, that grabbed the attention of the stock market.

Not for the first time, horse-racing and sports lotteries were mentioned in the document as a way to promote the development of tourism on Hainan. The latest document urged the province to nurture equine events, as well as beach and water sports, as part of a plan to turn the tropical region into a hot sport for sporting travel.

The region can also explore lottery products linked to domestic and international sports.

On April 16, the first trading day after Xi’s speech and the release of the State Council blueprint, Hainan-related stocks swam against the downward tide to rise on both the Shanghai and Shenzhen bourses, with 21 out of 24 tradable stocks hitting the daily upper limit soon after trading kicked off.

This excitement continued into May, with Hainan-based animal husbandry and agriculture firm Luoniushan sending its share price rocketing with the news it had received regulatory approval to build a horse racing-themed entertainment village on the island.

The company said it aims to begin construction in 2018 and complete the 29-billion-yuan project in three years. The 1,235-acre village will include a race track, an equestrian center and a horse-racing park. Luoniushan responded to the Shenzhen stock exchange authorities’ skepticism about this plan by admitting that funding issues may push back the completion deadline.

The company’s 2017 financial report showed it has nearly 2,000 acres of land reserves, with large chunks designated as agricultural plots.

At least nine applications to establish horse-racing businesses were submitted to the Hainan authorities in 2016 and 2017, according to the state-run Xinhua News Agency. A few of the nine have government backing, such as the Hainan Horse Racing Entertainment Co., which has the Hainan Province Tourism Development Commission as a shareholder.

Despite all this hype, the prospect of betting on horse races still seems remote. The State Council document’s references have indeed raised more questions than they have answered. It didn’t specify a time frame for the development of the industry, where it could take place, or whether this move amounts to the legalization of horse-racing and sports gambling on the Chinese mainland, where both have long been banned.

The idea that Hainan might become a hub for horse-racing and gambling has been around since the region was made an SEZ in 1988 and even mentioned in the government’s 2009 directives to boost tourism.

One local businessman involved in the tourism trade told Caixin that horse-racing, or something like it, is desperately needed to upgrade the region’s appeal to visitors. “The tourism projects are not appealing enough in Hainan. Many tourists came here and found they had nothing to do but lie on the beach,” he said.

Hainan will still have to overcome obstacles — including technology, administration, and tax management, as well as accrediting racing personnel and vets — before a horse-racing sector could possibly be a success, the South China Morning Post cited Hong Kong Jockey Club officials as saying in an article last month.

In addition to making Hainan a free trade port to rival Hong Kong, Singapore and Dubai by 2035, the central government’s ambitious goals for the province’s economy include developing sectors such as energy, commodities, carbon trading, internet technology, health care and finance.

After Hainan was made an SEZ in the 1980s, thousands of people ferried across the Qiongzhou Strait to the island in hope of finding their fortune. One person who found what he was looking for was Pan Shiyi, a real estate tycoon born to a poor family in Northwest China’s Gansu province. Pan founded a company on the island and managed to unload his assets before the property market collapsed in the 1990s.

However, today, a lack of talented workers is perhaps the biggest challenge Hainan must overcome to achieve its economic plans. A provincial government report last year acknowledged that “talents and the structure of the talent pool need to be improved,” it said. The central government April’s document also mentioned “talents” 27 times, marking the importance that solving this problem will play in Hainan’s development.

Yan Se, associate professor of applied economics at Peking University’s Guanghua School of Management, said that the province must build up a social and cultural “software” system to attract talented people. This includes policies on housing, local household registration, social security, pensions, education, transport and health care, all of which are relatively primitive in Hainan.

Hainan in April expanded homebuying curbs that barred non-locals from buying a second home. On Wednesday it announced that car-buyers will have to enter a lottery or auction to win a license plate from Aug. 1 onward, which will make buying a vehicle more expensive and time-consuming.

He said the Hainan government should put itself in the shoes of potential incomers to the province to figure out what their concerns are and how to address them.

“If (they) can move as quickly as Shenzhen, all these issues could be tackled quickly,” he said, adding that doing so could draw more companies and talented people to the island and improve its business and cultural environment.

Chi Fulin, president of the China Institute for Reform and Development (Hainan) and policy adviser to the Hainan and Guangdong provincial governments, told Xinhua-affiliated news website CFBond that the island must use market-orientated methods to draw in higher-end workers instead of administrative measures.

As there is no previous Chinese mainland free trade port from which Hainan can learn, the province will face many uncertainties and challenges down the path, Chi said, adding that Hainan’s success will depend on how far opening-up can be pushed.