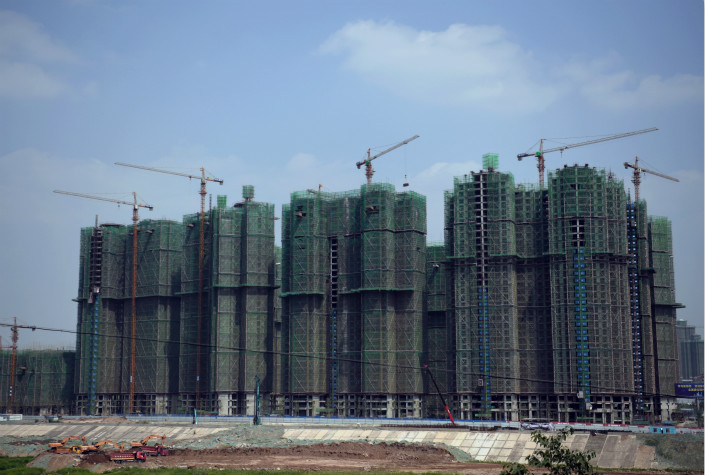 Apartment blocks are built in Chengdu, Sichuan province on May 15. Photo: VCG

Prices of new and existing homes in four first-tier cities fell faster in April on an annual basis than they did in March, the National Bureau of Statistics (NBS) said Wednesday.

In in the southern city of Shenzhen, new home prices slid 2.2% in April from a year earlier, while prices fell 0.8% in Guangzhou, 0.7% in Beijing and 0.2%, in Shanghai, according to NBS data.

Of the 70 major cities tracked by the NBS, new home prices fell in seven cities from March to April. The number was unchanged from March.

However, compared with April 2017, new home prices fell in 10 of the cities last month, up from nine in March.

There were several areas of China where home prices rose despite government efforts to keep them in check. In Hainan, real estate prices have surged since the central government announced in April that the southern island province would be developed into a free trade port by 2035.

The provincial government has put homebuying restrictions in place to fight speculation. On April 14, it barred nonlocal buyers who already own property in Hainan from buying any new homes. The Xiongan New Area, an economic development zone south of Beijing, has taken a similar approach to prevent its property market from overheating.

New home prices also spiked 6.1% year-on-year in Dandong, Liaoning province, a Chinese city on the Chinese-North Korean border, where real estate prices have leapt on signs of a diplomatic thaw on the Korean Peninsula and speculation that North Korea might open up its economy.

Such optimism might not last. On Wednesday, North Korea threatened to cancel next month’s meeting with the U.S. in protest of joint U.S.-South Korean military drills.

Across China, home prices continued to rise in the first three months of this year, according to a private survey. In the first quarter, the average price of a new home in China rose 8.7% year-on-year to 8,275 yuan ($1,299) per square meter, according to a report from real estate consultancy firm Cushman & Wakefield.