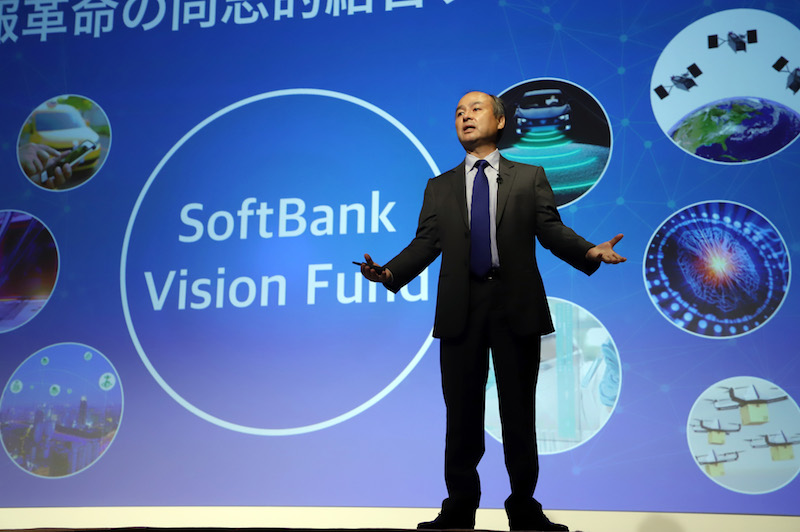 The world's biggest technology fund is getting even bigger.

Son didn’t give a specific timeline, but the Japanese entrepreneur said at a forum in Tokyo that the Vision Fund 2.0 would come “sometime in the near future.”

Son has held preliminary discussions with investors about committing to a second fund as early as 2019, according to Bloomberg, citing people close to the talks. The people said the planned fund would most likely draw a wider pool of investors than the first one and is likely to be similar in size.

SoftBank announced the plan to raise $100 billion for the first Vision Fund in October 2016. As of May 2017, the fund had raised a total of $91.7 billion from investors including the sovereign wealth funds of Saudi Arabia and the United Arab Emirates, and technology giants such as Apple Inc., Qualcomm Technologies Inc. and Foxconn Technology Group.

The first fund has invested about a third of its capital in more than 30 companies, from ride-hailing service Uber to chipmaker Nvidia to shared office space startup WeWork, according to SoftBank’s annual report for the fiscal year ended March 31.

According to SoftBank’s annual report, the sharp rise of Nvidia’s stock price contributed a significant part of the Vision Fund’s profits in 2017. The chip maker’s stock price has surged nearly 80% over the past year.

Son, known for his risk-loving unicorn hunting, said he’s currently most interested in artificial intelligence, the internet of things and smart robots. But SoftBank and Vision Fund’s investments go far beyond those areas.

SoftBank is betting big on the ride-hailing industry. In January, SoftBank took a 15% stake in Uber as the company’s largest shareholder. Before its Uber deal, the Japanese conglomerate had invested in India’s Ola, Singapore’s Grab, China’s Didi Chuxing, and Brazil’s 99, which Didi acquired in January.

Son said SoftBank plans to transfer more than $20 billion of its investments in the four ride-hailing companies into the Vision Fund. The proposed transfer will provide these companies access to the Vision Fund’s resources, hoping to help them to work closely with other portfolio companies and create synergies.

Son said the four ride-hailing companies had a total $65 billion of gross merchandise volume in 2017, a yearly growth of 108%. Son said he is aiming for initial public offerings of Uber and Didi “in the near future.”

The Wall Street Journal reported last month that Didi could pursue an IPO in the second half of 2018, ahead of Uber. The Chinese ride-hailing giant is hoping to fetch a valuation of $70 billion to $80 billion or more, making it one of the largest technology IPOs ever, according to the report, citing people familiar with the matter.

In February, the Vision Fund was among a group of investors in the $400 million pre-IPO funding for Ping An Insurance Group’s health-care portal Good Doctor, an online medical platform allowing users to consult doctors for diagnoses.

Son has been preaching about his plan to build a “strategic holding synergy group” that will keep growing for 300 years by investing in the winners in every sector across the world and helping the companies work with each other. Once these companies lose their position as No. 1 in their sectors, SoftBank would consider an exit.

While discussing SoftBank’s 2017 earnings last week, Son said he was optimistic about SoftBank’s 2018 outlook, largely driven by the Vision Fund.

“Vision Fund has been here for about one year and every month I have become more confident about Vision Fund and its performance,” Son said on the earnings call.

Son said SoftBank plans to bring about 30 unicorn companies in which the Vision Fund invested into Japan through joint ventures with its Japanese unit SoftBank KK. Didi will roll out a joint venture with SoftBank in Japan later this year.

Son said such joint ventures would bring additional value from the portfolio companies of the Vision Fund.