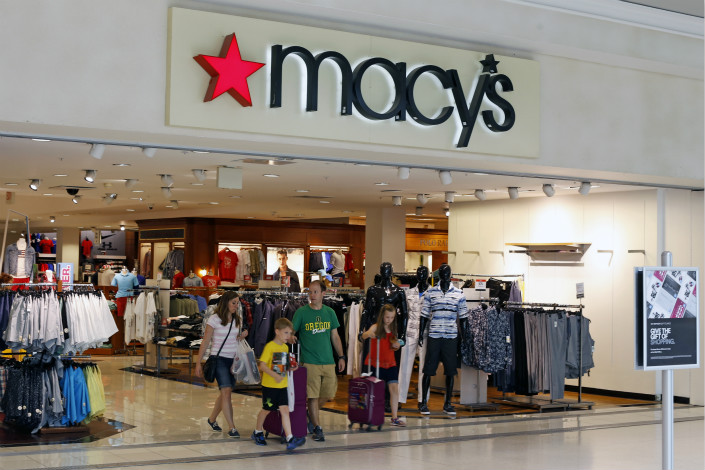 Customers leave a Macy's department store in the U.S. on July 31. Photo: IC

The department store operator said its e-commerce team in San Francisco would take over management of its China business with support from a Shanghai-based unit of the Fung Group, Fung Omni Services, which provides retailers with services such as inventory and order management and marketing.

The joint venture, which involved an investment of more than $25 million, was announced in August 2015 as part of Macy’s efforts to expand into China and learn about the Chinese market. The Ohio-based retailer had a 65% stake in the venture and its closure will lead to an impairment charge of 29 million pounds ($39.13 million), according to Macy’s earnings report released on Wednesday in the U.S.

Macy’s said it was taking a “new approach” to its business in China, without providing further details, and said it would remain active on Tmall and on social media. The announcement came as the struggling retailer reported first-quarter earnings that were well ahead of analysts’ expectations and raised its full-year profit forecast.

Macy’s stores have been a popular destination for Chinese tourists visiting the U.S. for many years. The retailer has been selling goods online to Chinese consumers on its official website since 2011 and lets customers pay using the Alipay payment system. The aim of the joint venture, based in Hong Kong, was to make Macy’s more accessible in China itself and help the company understand consumers and the retail market, executives said at the time. Fung Retailing was responsible for providing the logistics and delivery of goods bought on Tmall through an inventory system based in Hong Kong.

Macy’s has yet to announce any plans for a physical presence in China, which has been a difficult market for international retailers to crack. British clothing and food group Marks & Spencer and Spanish supermarket chain Dia are among several big foreign names to close their stores.