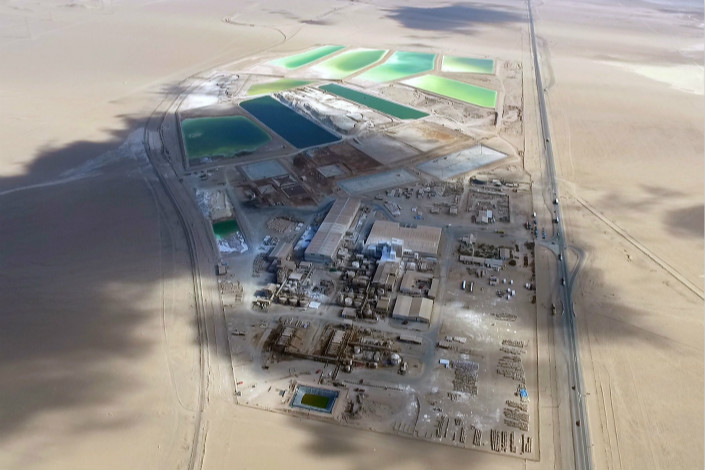 A lithium mine processing plant of Sociedad Química y Minera, the world’s second-largest lithium producer, is seen in the Tacama Desert of northern Chile in December 2016. Photo: VCG

Two Chinese companies have announced separate purchases of stakes in foreign firms related to the new-energy vehicle sector, as they rush to cash in on China’s huge hunger for the vehicles and the batteries that power them.

The Sichuan-province-based Tianqi Lithium Corp. said Friday in a statement (link in Chinese) that it will pay $4.1 billion for a 24% stake in Chilean peer Sociedad Química y Minera (SQM), the world’s second-largest lithium producer.

This purchase will give Tianqi greater access to the element and boost China’s presence in the electric-car-battery supply chain.

The interest in lithium comes as Beijing is aggressively promoting electric cars — many of which use rechargeable lithium batteries — to combat air pollution and help domestic carmakers build global brands. Although the country has extensive reserves of the metal, much of the lithium used by domestic companies comes from overseas.

Tianqi said the transaction will help lift its footing in the global market, and it fits into its development strategy.

The company, which has a market capitalization of $9.5 billion, plans to raise at least $1 billion from a Hong Kong flotation this year, the International Financing Review reported. Part of the proceeds would be used to finance Tianqi’s investments.

The companies are to jointly develop and launch fuel-cells systems for China’s fast-growing electric bus market, Ceres said in a statement.

“The low-emission public transport market in China represents a major commercial opportunity,” it said. “This is being driven by the Chinese government, who is stimulating this sector through subsidies and Zero-Emission Zones, designed to reduce air pollution, carbon emissions, and road noise while increasing public health and lower operating costs.”